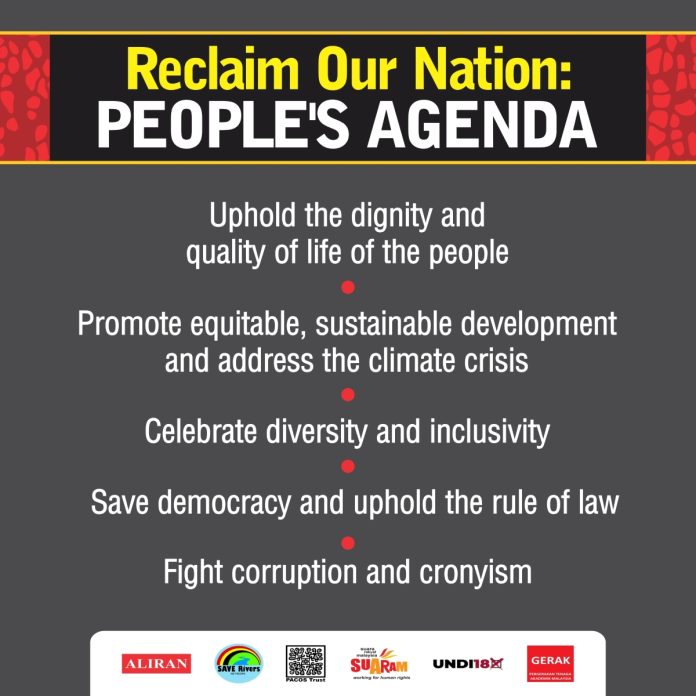 The Great Malaysian Race to convey overseas postal ballots to the various returning offices in Malaysia is underway. Witness the people’s mobilisation to ensure these ballots reach home in time.

Though this volunteer-driven effort is remarkable, surely the Election Commission could have come up with a better way of handling overseas postal ballots without inconveniencing – or worse, disenfranchising – thousands of overseas postal voters whose ballots may miss the 5pm arrival deadline on polling day. For a start a three-week campaign period would have given oversea voters more breathing space to mail back their postal ballots instead of the mad rush we are seeing now.

This time the postal voters are even more crucial. At the last general election, we had 7,979 registered overseas postal votes, but for this election, we have 48,109 about six times the number in 2018. So they are likely to play an even bigger role in influencing the results of seats, especially in the more urban areas.

The postal votes for Election Commission workers, election workers, armed forces and police personnel (Borang 1A) appears to have jumped from 149,730 in 2018 to 299,097 – double the number. How has this come about?

So postal voters are likely to play a much bigger role this time.

Don’t know what the fuss is this all about since Aliran could not put an independent candidate in GE15 to put present its manifesto to rakyat. So this is syok sendiri!

Political parties and civil society groups/NGOs have different roles to play in the public sphere.

Come to think of it, Aliran could have put one independent candidate in GE15 – just RM10K investment to EC to get all the publicity from the mass media to highlight People’s Agenda during the 2-week campaign period.

Aliran leaders in the past very vocal even physically to risk ISA to reach out to rakyat.
Anil being the leader may have missed the golden opportunity once in 4-5 years to gain visibility for Aliran, knowing bravity pulls in the emphathy support.

Was the People’s Agenda picked up by any political parties of either side? Ah did not see any, – why? Will it continue to be propagated for GE16 ?

The Council of Churches of Malaysia (CCM) has called for action to be taken against PN’s Muhyiddin Yassin over his statement that Christians in Malaysia were working with a group of Jews to Christianise Malaysia.

Jews or Yahudi are not Christians.
To imply Jews causing Christianisation shows the ignorance of facts and history. Malays are sadly still being scared by Yahudi, Communists… after decades of brainwashing.

Most of the independent candidates including Siti Kasim lost their deposit.

Same with Mahathir and son, as well as Jeff Ooi and Ong Tee Kiat.

Before your passing Tun M, please do the right thing and openly support DSAI and PH to return to power. This will be your last saving grace and will end your political career on a higher note. The rakyat will still remember your contribution towards nation building but your open support will be an even bigger achievement. We, as a nation must not be led by a racist incompetent ex-PM again supported by the most dangerous politician in our country.

Che Det in his twilight years will focus on writing his memoir. Certainly he has to admit his mistakes in politics and business. He should realise that his pet project Proton failed miserably until Geely of China took over. In other words, he failed because he shun meritocracy and too consumed with bumiputera agenda.

GE15: STOP HARPING ON WHO WILL BE BN’S PM CANDIDATE, DR WEE TELLS OPPOSITION by Yee Xiang Yun dd Thursday, 17 Nov 20228:15 PM MYT https://www.thestar.com.my/news/nation/2022/11/17/ge15-stop-harping-on-who-will-be-bns-pm-candidate-dr-wee-tells-opposition ======== Its is alright Dr. Wee. We Rakyat know what is going on. PH is already set on AI. PN is already set on MY. Just that on your side it is possibly three people vying for the PMship. Need to sort it out – internally before the end of the election day. BN needs to be seen to be on top of things and in full control for seamless transition. Our Rakyat do… Read more »

” Sivarasa, a three-term Sungai Buloh MP, was dropped as a candidate for the general election because of health reasons. ”

Instead of pointing fingers at others, why don’t tell us something about why you were dropped as a candidate for GE15 ? If it is for health reasons, what are you doing in a ceramah, on the stage, giving speech. Why health reasons for you and not for Padang Serai candidate ?

Here is an example of an Independent contestant and why Independent Parliamentarians should be encouraged more for next GE16.

GE15: I AM CONTESTING AS A INDEPENDENT BECAUSE OF MY PRINCIPLES, SAYS TIAN CHUA by Benjamin Lee dd Wednesday, 16 Nov 2022 8:39 PM MYT

” My decision to contest as an independent is based on principle and not for political gain,” said the Batu independent candidate.”

A1 == Anil Netto (Author) reply to Ginger dd 16 Nov 2022 2.57pm ” Political parties and civil society groups/NGOs have different roles to play in the public sphere. ” ======== Not necessarily. Time has come to change the political landscape. So, change your rules where necessary, as NGOs and Activist etc, will now have get into a bigger role to play as Parliamentary independents. Get prepared for GE16 participation. NGOs’ People Agenda has failed to get traction.  Start small , little by little build up the Parliamentary independents. ( Sedikit-Sedikit Lama-Lama Jadi Bukit ) Most political parties have not REFORMED. Not sure if they… Read more »

A2 == Rakyat can’t depend on political parties, they need political independents. And they are going to need NGOs, activist and individuals from each constituency as independent Oppositions to lead the way forward.   Note the current Rakyat’s sentiment / feeling, so eloquently put in words by Frankie D’Cruz, who like everyone else is a Rakyat. ” CURSE OF NAIVE POLITICIANS IN THE WORST-EVER CAMPAIGN by Frankie D’Cruz ” dd November 14, 2022 7:30 AM ” Having covered general elections for over 40 years, I have not known a political class so out of touch with the people and so lacking in original… Read more »

Addressing Malays who voted for PN, Siti said: “Good luck Malays, you dug your own grave. Whoever said not to talk about (separating religion and government), this is the result. I’m not surprised. Thank you. I got the last laugh.”

Siti and all other independents should move forward and start to focus on GE16 beginning now.

Siti should have at Cameron since she is known to Asli community, but she lost everinvluding her deposit due to arrogance and miscalculation!

Siti taught us that it is better to be humble before you achieve any success.