Stone and eggs were thrown at a PKR ceramah near flats in Lembah Pantai last night and one senior citizen, a PKR supporter, was injured. 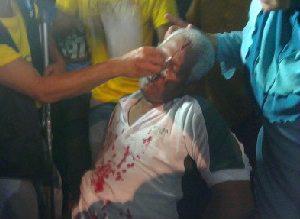 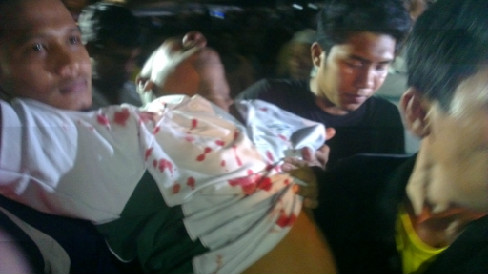 Among those speaking at the ceramah were Anwar and his daughter Nurul Izzah, the MP for Lembah Pantai.

Power supply was also interrupted and the speakers “sabotaged”, according to a tweet by Nurul Izzah. She added that she also spoke to Shah Alam Khalid Samad and found out that his tyres had been slashed.

The TV Selangor website reported that several groups of Mat Rempits revved their engines in a bid to disrupt the PKR speeches.

Another ceramah organised by Umno-Tibai was being held close to the site of the PKR ceramah.

Irrationality – by a minority who perhaps have a lot to lose – rules the day. A sign of increasing desperation ahead of the coming general election.

I wonder how Utusan and TV3 are going to report this.

It is the beginning of violence, no finger pointing. M’sia will one day end up like the Middle East just for the sheer desperation to win. Politics should be mature just like the US, you win OK, the losers will just close rank and join the winning administration. Something ought to be done before politician lose their sanity.

When UMNO has a ceramah, I never see PR supporters coming in big groups to distrupt the ceramah. In fact PR supporters stay away and mind their own business. But in … PR ceramah, …. gangsters … create trouble and violence. This clearly shows that UMNO can only rule with … trouble, they are not peaceful people. And yet that stupid old man has the cheek to claim that PR will be violent. It is clear now that (someone) has given instructions to these UMNO gangsters and mat rempits to create trouble as he has not said a word despite… Read more »

When the 3 datuks with their sex video also failed…

When the defamation by Nalla, Chandra, Wee Ka Siong, etc etc etc all failed, now, they resorted to violence !!!

This is the culture of Malaysia? Do Malaysia still have hope? Do we want our future generation to learn and inherit this culture? Let us stay calm and God will always protect the right against the might.

Crush bones, lost lives, these were the war cries to win at all cost, war against whom? against m’sian whom don’t support them. This is the best democracy’s effort, product of 1 malaysia, great!.

M’sians should have not booed him in London! huh!, “show some repects, wei!” shouted an idiot, during the booing.

The more stones, eggs and other missiles these imbeciles supporting UMNO/BN use to disrupt peaceful ceramahs by the Opposition the more hatred they are sowing against the government of the day for allowing thugs, hooligans, ruffians and hoodlums to hurt the people. PDRM lost its credibility long ago. Now they have become so incompetent and directionless in discharging their duties, that they too are showing their desperation in keeping IPCMC at bay. UMNO/BN will be obliterated if they cannot curb the excesses that these unruly, uneducated and misfit lowlifes who have nothing better to do than be the running dogs… Read more »

How are they going to report it? Probably that old folks should stay at home, like students should concentrate on their studies.

Anwar & Nurul at Lembah Pantai – doing their job is wrong?? Seriously screwed up in the head by entitlement these people..

If pakatan home ground ceramah is greeted with eggs and stones, then you know the rakyat wishes. Rakyat is angry with BERSIH 3.0. By the way, Anwar kena sue again !!! PKR better sack anwar because he is court-man. Yeah, always visit court just like a habit.

And the prosecution team leader is now defending Anwar. Doesn’t that just make your day, Gherks? Better visit your 1clinic for more anti depressants and reduce the fried chicken.

AMMO, Barang Naik and Ah Cheap Kor are now feeling the heat and they have (condoned) hooliganism and thuggery to prevent the Pakatan from spreading out the truth. The truth has prevailed when the Bukit Jalil gathering could not even fill half the stadium. Its not the people who are angry. Its the Na Cheap cronies who are angry because just like the Geelakan they will lose out big if Pakatan come to power. Using the police, judiciary and the govt machinery to silence Anwar, Ambiga and all peace loving Malaysian will not work. Anwar is a court man but… Read more »

Yes, we know what you wish for.

We know what is crushed bones and lost lives, how to launch war against the people, to win the election at all cost!. Utmost honors thing to do!.

Best democracy in the world!, 1 Malaysia!.

My pray to your god.

Once again.. a proof that there is something gravely wrong with the way our country is at the moment..

Thugs rule the land when perpetrators know they can escape and get away with it !!

This is indeed a VERY VERY SAD day in Malaysia when anybody can condone such incidents, stone-throwing-etc.. till there is shedding of blood.

Is this the ‘???ways’ of Mat Rempits under the tutelage of Khairy Jamaluddin?
Samseng is the only word I can think of for the whole year 2012.
Inclusive of some men in blue …

Khairy said those umno … racted because they were provoked. If that is true, going by FIFA Fair Play rulings, those retaliated should be given the red card and punished!

LOL, signs, signs more signs of desperation! Surely, these actions are not going to win the hearts of the electorates! The magic of Bersih 3.0 is showing. UMNO/BN must be scared? If the actions are not by UMNO/BN? Think about it folks, don’t you think those doing such things have alot to hide? Don’t you agree that DSAI had been able to outdo them? The media blitz against DSAI are not working as people just do not believe the medias anymore? They believe DSAI more? Whatever they do, the fact is, UMNO/BN may fall anytime come PRU 13! This is… Read more »

WHAT BODOWI SAYS IS ABSOLUTELY RIGHT ! WE HAVE CITIZENS OF THIRD WORLD MENTALITY !