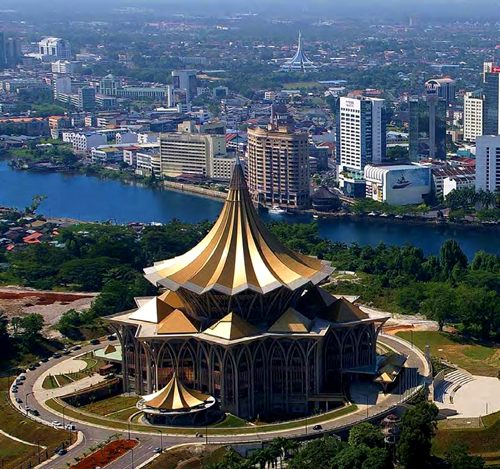 With the Sarawak state elections expected to be held in April, we can expect all kinds of announcements to be made ahead of the polls.

Like this one: Minister for Rural and District Development Ismail Sabri Yaakob reportedly announced on 21 February that a Mara Science Junior College would be built on a site in Bintulu, with the first intake of students expected in 2019.

Expect more such announcements in the weeks ahead.

By the way, can someone let me know the status of the “university” in Teluk Intan promised by Gerakan-BN candidate Mah Siew Keong on 26 May 2014, just five days ahead of the Teluk Intan by-election.

Ten days after he won the by-election, it was reported that the Perak state government had “enclosed” a 30-acre plot of land for the “university”. The talk then was that the “university” would be just a branch campus of Wawasan Open University. But a check on the WOU website shows that the only regional centre in Perak for WOU is in Ipoh at Wisma Gerakan.

So the BN should tell us what the progress of this “university” is, after two years have passed.

And what about his promise to get Unesco listing for the leaning tower of Teluk Intan? What is the status of that?

These updates of promises made are important so that the Sarawak voters can start believing all the BN promises that are expected to rain down on them, if previous Sarawak state elections are any guide.

Some people would call these kinds of promises electoral inducements or vote-buying or more politely, “the politics of development”. You know, “you help me, I help you”. These would be frowned upon, even forbidden, in more democratic countries. Unfortunately, in Donationland, almost everything is fair game.

If you can think of other unfulfilled promises ahead of previous elections in Saawak or elsewhere in Malaysia, whether made by BN or Pakatan parties, share them with us below.

What the Sarawak election means for Najib’s prospects http://www.todayonline.com/world/asia/what-sarawak-election-means-najibs-prospects Many Malaysian and international pundits are using the results of the upcoming Sarawak polls to see if the 1MDB scandal will affect Malaysian voter behaviour. Mr Najib has taken a personal interest in the polls, visiting Sarawak more than 50 times since he took power in 2009. It is fairly obvious that he is looking for a big win in Sarawak to use as political capital and momentum for the next federal polls, which are due in 2018. Many international and Malaysian observers are speculating on how Mr Najib’s political position… Read more »

Toll-free Pan Borneo highway (to be subsidised by hike in North-South highway too?) and cheaper PR1MA for Sarawakians… desperate for Sarawakians votes?
https://hornbillunleashed.wordpress.com/2016/03/13/cheaper-pr1ma-homes-for-sarawak/

Adenan should press for higher royalty for the petroleum. After the election he will have no chance. Look what has happened in Kelantan.

Umno may even brong Mat Rempit culture to Sarawak as it is considering street racing for Mat Rempit in KL.

Umno is desperate for votes, now is trying hard to appeal to Mat Rempits.
Umno is even thinking of legalising ganja – to get votes from the drug addicts(?)

The plan to provide motorcycle racing tracks in the city is still on the table, with the possibility of extending the proposal to East Malaysia as well. Federal Territories Minister Datuk Seri Tengku Adnan Tengku Mansor said that the matter was among the issues discussed at a meeting with other Federal Territories Members of Parliament (MPs) at the ministry today. “I have discussed the ‘Mat Motor’ issues, and I want to solve the matter at hand,” he said, adding that he is looking for a way to provide space to allow motorcycle racers to do what they are interested in.… Read more »

Didnt you all read until this stage (1mdb scandal and 1donation) there are still people not wake up but believe in 1pm and his cakap cakap, Zaid Ibrahim said what an idiot nation. How true ??? Dap govt did give rifle range a new lease of life that is some free renovations for the owners. I visited an owner there and he showed me his unit. He was happy! During the chinese new year i visited penang and i see that they are widening the pavements in pulau tikus for the pedestrians. All in all, what i heard was lim… Read more »

Penang wakes up this morning to read Ho Liao reclamation for people at Gurney Wharf, which Sarawakians or Telok Anson folks can only dream of.

It will bring back the old charm if Gurney Drive.

What are you talking cement?
Artificial beach, cement here, there everywhere.
And you want to dream old charm Gurney???

Ho Liao according to Penangites, as Wharf project in Penang gets thumbs up:

Lying session happen all the time.Its perks during election
rajraman.After all the lying the Political Traders goes on with their way of live.Sell lies.Just bad mounth Pakatan now bad mouth Umno Barisan.
Don’t have choice.One run by Deity,one run by proxy in Selangor,one run by God Party selling God name and one run by a well known thief.

Edelman 2016 Trust Barometer Malaysia Report has reported that Malaysians, regardless of their education level, are fast losing trust in Putrajaya, which could see the federal government ousted in the next general election.

The overall trust towards the government was at 40%. The main reason for this plunge in trust is the pervasiveness of the Internet which has democratised access to information.

Anil to note that BN’s Nur Jazlan has proposed that bloggers and online writers must register with the Communications and Multimedia Ministry.

Trust Politician-your $$$ gone.Trust their words-your future generation life gone.
Like Nur Jazlan was hype by MI and after his promotion his words gone with the wind.
rajraman.Check and balance but human gaves locks to Politician and the Politician throw the key after winning election.The voters become prisoners.Pakatan Harapan will be no Harapan if voters keep protecting the Deity without questioning his fist rule and PKR insist working with God Party.
I gave up with a bit of trust deposit left on Pakatan and without any trust with Umno Barisan.

Raj lost faith in BeEnd & Harapan and looks like he is migrating out of country ???

No henson,
Not migrating since there is some glimmer of hope when peoples like Tualang and Anil around although i can pack my bag and leave tomorrow.

rajraman. Lost faith totally on BeEnd but still hoping some reasonable thinking peoples will polish a bit the Deity arrogance and PKR flip flop. We will see the rise of our country again but no Anwar or Azizah as PM.
I have enough of Anwar Islamisation of Malaysia.

Brother Raj please forward your displeasure to MIC as I have done many times.

Kumar,
Any of your displeasure solve by MIC so far?
Personally i have non but as Indian the Indian community need help in getting a bit of economic pie.

rajraman.MIC good for nothing,UMNO good to siphone $$$ and Pakatan good for championing dead Indian with twitter king ,body snatching,child custody from UMNo Mullah.
I just need valium and xanax and i can pay for it.
Tq Kumar.

Already blogger Nkkhoo could have been warned by MCMC, now he is no longer blogging on local politics, but on health matters to be in the good book of the authority.

Nkkhoo has lost his oomph factor, probably his tagline of corruption DNA in BeEnd has antagonised the powerful one$.
Now he is talking health matter to be inducted into Subra’s Health of Fame. Truly shameful!

Not sure if Anil’s Justice Flows tagline may be misinterpreted by BeEnd as what they have done to PSM’s democratic socialism to create havoc later? The readers must stand firm not to be sidelined by ylang-zoro squabbles.

Are we better? If yes go and offer ourselves as independants otherwise like Malay mail big talk

The rural folks in Sarawak will likely be deceived by all the janji, as BN has used the strategy successfully in Teluk Intan. Once BN retains Sarawak, the floodgate will be open for the influx of Bangladeshi workers (Projeck IC in the making?) and more forest will be converted to oil palm plantation.

Mah’s empty promise may cause Penangites not to believe in Teng’s efforts to recapture Penang ?

Gerakan Mah has lost his conscience to be a Minister on empty promise, just like his former boss who entered the parliament as senator via the pintu belakang? So Gerakan Teng may try his luck with such method?

In the absence of accountability, anything under the sun could be promised by BN when they desperately want your vote.

MCA’s Chong Sin Woon asked why the JPA did not recognize the degrees from China universities for civil service intake despite the fact that BN has recognized 820 China universities as part of agreement for Xiamen University to operate here, and for China to recognise Malaysian degrees?