Pas votes have held steady – only a dip of 25 votes – despite the reduced turnout. But perhaps more people could have been encouraged to turn up and vote for Pas if Pakatan solidarity had been stronger and if it had not been for Pas’ hudud initiative.

This means in all likelihood, the GST and the higher cost of living has hurt the BN; it polled 6244 votes fewer this time compared with GE 13 and its share of the valid votes cast slumped from 66.8 per cent to 61.6 per cent. Pas’ share, meanwhile, has climbed from 33.2 per cent to 38.4 per cent, more likely due to unhappiness over GST rather than any enthusiasm for hudud. (Pas had used GST as a key issue in its campaign.)

The big question is … to what extent will GST hurt the BN’s performance and how will the hudud factor (and its impact on Pakatan solidarity) affect Pas’ performance? Mind you, this area is about 90 per cent Muslim.

Probably because of GST and hudud, turnout has dropped from 85.5 per cent (in GE13) to 73 per cent this time.

This means some 6300 people of the 45849 voters who cast their ballots in GE13 have stayed away this time.

So we can see, in the last few elections, the BN has polled two thirds of the votes and Pas a third.

My prediction is that Pas will lose votes, which means there is no great support for its hudud push, is there? But the BN too will lose votes as disenchanted voters might not be able to bring themselves to vote for the ruling coalition either, because of the GST and repressive laws. 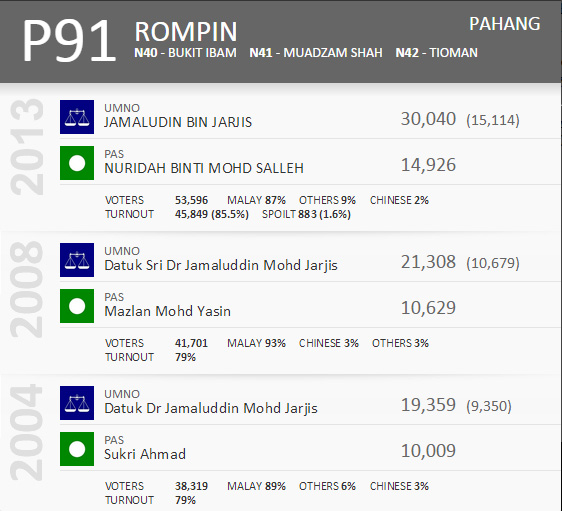 There is a 60% chance he will have to strip nake and walk Penang Road but I doubt he will janji ditetapi just like the many promises made by Pakatan DAP, PKR & PAS. Reduced majorities in by election are common. Even though BN MCA did not contest in the stronghold of Karpal Singh, DAP majorities was also reduced very substantially while the table was turnover against DAP in Teluk Intan. . The people are getting disillusion with Pakatan DAP & PKR especially the Chinese, Indian and PAS supporters. The turnout should not be more than 70% but then whether… Read more »

Can the MP of Pekan stretch … between Putrjaya/KL & Pekan together with Dubai, London, Paris or various cities in the US, etc? Don`t you think it will be too fatique for him even with the comfort of flying around in the jet 1Malaysia.

Awang Selamat Ori, well and good. Thanks for sharing about the ABCD, Asalkan Bukan Cap Dacing! I am very relieved. I was actually tempted to say that if the Umno-BN, with all its problems in tow, can still wrest back Permatang Pauh from PKR after the MP for Permatang Pauh has been jailed for Sodomy II, with all of its pregnant implications, then we can forget about politics in Malaysia. Yes, the entire country – “dari Perlis sampai lah Sabah” – as the lyrics of Malaysia Berjaya, that stirring patriotic song, epitomized our Merdeka! But, brother Awang Selamat Ori, please… Read more »

bctan ; I think you are like what the Malay say too jujur. Awang is a hardcore PAS supporter. Let me put it this way. Should BN UMNO lose, Pakatan comprising PKR, DAP & PAS will form the govt. As we all know PAS main agenda and motive is hudud and an islamic country. With Pakatan in the govt, you can bet that we shall turn into an islamic state with PKR and PAS members supporting the bills in Parliament. You may say PAS does not have the number. Are you sure. They will still have the number with the… Read more »

Yang, the scenario you painted is plausible, but not sustainable as I do not think Umno and Pas can form a stable government on their own. They know it. Just look at the figures for foreign investments and monetary outflow. Every time Pas acts up on hudud, the immigrant consultants tell me they experience a sudden influx of applications. If ever a pure Umno and Pas government is formed, I know where I am headed. God bless you, brother. You can also see that my prediction of a lower majority win for BN-Umno in Rompin has been proven correct. I… Read more »

If Pakatan loses Permatang Pauh, I will strip and walk the entire stretch of Penang road naked. No problem, I will deal with the fines and so on. Only fools of the first degree will waste their votes on UMNOBaru/BN, and fools of a higher degree will predict a victory for BN. Just what had BN done to deserve your votes since May 5th 2013? PR is no angel and they seem quite lost but they have secured at least 90% of the Chinese votes! Mujahid Yusoff Rawa spoke to thunderous applause in Bukit Mertajam on Monday night. And it… Read more »

Given the state of the Barisan Nasional and the Pakatan Rakyat, I expect the status quo to be maintained, with BN winning in Rompin and PR winning in Permatang Puah – both with reduced majority. It’s tricky because a low turnout in Permatang Pauh is more than likely to produce a BN win which, to my mind, is most unlikely.

The status quo result is expected to also reflect the custate of confusion that pervades the electorate in the whole country, Anything stunning is expected to erupt only after the date of the by-election.

Two Political Trader Party fighting for votes.
1. Hudud without respecting our constitution and their top leader proven failure. The same person lost Kedah and Trengganu. Can this fellow can be leader?

2.They think they are chosen for life to rule Malaysia 4ever. Don’t say much about this party since everything seditious for them.Can this Party and their warlords can be trusted anymore?

rajraman. Still wondering how Pakatan and DAP going to bed with their bedfellows PAS by just ignoring Hadi?
That’s about Politics where Power is corrupt.

Lowering of turnout has nothing to do with GST or hudud. There has always been a lower turnout in by election from the tiger constituency to Teluk Intan and many others. BN will romp through Rompin and should win Permatang Pauh by about 1000 votes