The attempt to intimidate those participating in the Bersih 5 Convoy started this morning in Lumut.

And later, see below. You judge for yourselves who is acting aggressively. This is happening right in front of a mobile police van. Why were the groups not kept apart?

Tense moments inside one of the Bersih 5 Convoy cars as the Red Shirts on motorbikes rev their bikes menacingly and try and provoke those inside the car:

Why can’t the Red Shirts hold their own gathering elsewhere and allow others to gather peacefully. Is this a sign that they are losing the battle to win public opinion that they have to resort to such measures to suppress dissenting voices? Are they hoping to intimidate and deter other Bersih supporters from coming out later? Who are the real leaders, the patrons behind the Red Shirts?

This was the scene at the Bersih gathering in Lumut earlier this morning.

But the Red Shirts turned up there as well:

I like the spirit shown by the Bersih supporters – see below: 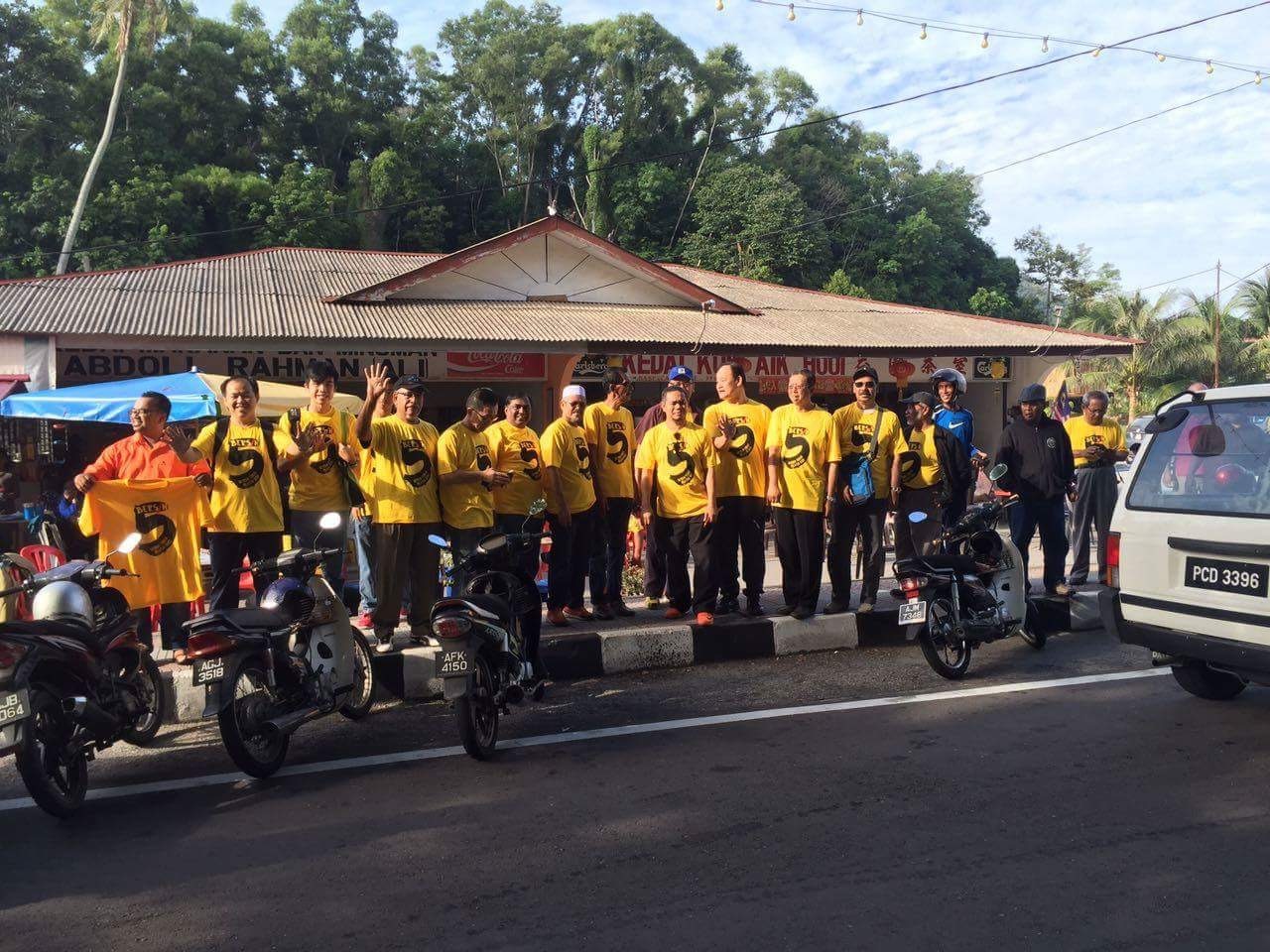 And this was the scene in Kota Bharu today:

And a Red Shirts motorbike gathering at Gurney Drive:

Katak jumping in Sabah, seeking more autonomous administration away from federal gomen as being done by Sarawak?

Bangsa Johor call a prelude to (what)?…

BN Johor has lost two-third majority with one Umno guy defected to Bersatu 3M. Tun M said simple defections in Perak or Trengganu will cost BN the state governments there. This could prompt Najib to call forearly GE before more damage is done, even before EC redelineation could come into effect to help BN? What is your assessment, Mr Anil?

Why no action by police on those red shirt thugs?

Because they are all reporting to the same boss?

And playing kompang on the Malay Psyche?
That Bugis warrior cannot do it alone.
It’s very unfortunate that one particular race can easily be clay-moulded & blow into it a life that highly depends on the clay moulder for direction (in life, work & national destiny) & timely reactive fervour in the face of the Bogeymen, also created by the same clay moulder in the minds of these dependents.
This is in sharp contrast to the Chinese who have no life-long affiliation to whatsoever except knowing their own survival game of the fittest minds & Money in the Milo Tins.

Anilnetto.com can use softer approach to get more to support more country green Penang by playing this song video to the readers:
https://m.youtube.com/watch?v=s9gAXwYZtfk

Petronas Cub Prix has inspired many Mat Rempits ready to ride into action when offered some Dedak as incentives, maybe get free red t-shirts, and ikan Bakar meal after the excursion.

Red Shirt Jamal Yunus to be investigated for link to IS as urged by MCA?
http://m.themalaymailonline.com/malaysia/article/wanita-mca-urges-jamal-yunos-probed-for-is-links

MCA tried to present itself to the Chinese community here. Nice try but 7-11 party is no longer relevant.

If those Red Fools think they can intimidate others with violence & anger antics, they are going to fail miserably! What we want for Malaysia is Bersih – free of corruptions, murders, violence & insidious election manipulations. Even a fair minded person who sees a wrong doing will not say it’s a right thing. Unless one is so obsessed with the Bogeymen chanted by BeeEnd & so intoxicated by money for a cause not worthy of a national good. Many kudos to those Yellow Shirts who mastered patience & EQ to confront the dangerous & violent Reds. May the good… Read more »

Scumbags in red shirts out to cause mischief and trouble.

But critics should make the point the Red Shirts are only following their leader’s lead – Najib’s. Najib is not subject to the law, why would they be? All this because if 1MDB.

So long as they do not turn violent, I say its great they are behaving like idiots. What they do attracts more attention FOR BERSIH. Think about it, what is the point of Red-Shirt in Gurney Drive? Urban voters are TURNED OFF BY THEM. It only adds the discussion as Bersih goes into heartland – gets people thinking. They rely on blind-loyalty, not thinking voters..

Red and Yellow fellow should harmonise and go watch movie RockBro together, and become better citizens of Malaysia to truly fight corruption in the country.

Good one. Just hope that the video could lure brother Raj back into action to this blog.

Who is this Raj?

A sea of red t-shirts made up mostly of Malay youths, has flooded the iconic touristic Gurney Drive, many on motorcycles, creating a lot of noise and causing a traffic jam around the Gurney circle. Some of the group, riding on their motorcycles circled the roubdabout and honked loudly at passersby.

Penang Umno youth chief Rafizal claimed that they number some 5,000 youths from all of Penang state who has “risen up to oppose” Chief Minister Lim Guan Eng over his graft charges.

Each red shirt Mat Rempit (allegedly) gets RM50 allowance for their brief outing along Furney Drive.

Brudder, Again thanks for thy write, will use as my UPDATE on “Keeping the Rage” on 1MDB/DS Anwar Ibrahim. Thanks, Zia You! YL, Desi PS C U at DE Miang CONner so.on. YL, Desi

Of course as brainless as their 1MDB leaders.
Wonder why IGP could allow such hooligans.

High time someone (takes action against) those yellow …