This evening I spoke to a PKR strategist in Permatang Pauh and he predicts a reduced majority of about 8000-10000 though his party colleague with whom I spoke to earlier had said perhaps a majority of 5000. Anything above 10000 would be a bonus, I suppose, given the reduced turnout expected.

The party strategist said the major issues in this by-election are GST, the higher cost of living and corrupt political leaders.

As I write this, a crowd of about 7000 has gathered for the final PKR ceramah in Seberang Jaya. Among the speakers are a Pas youth leader, Azmin and Rafizi. 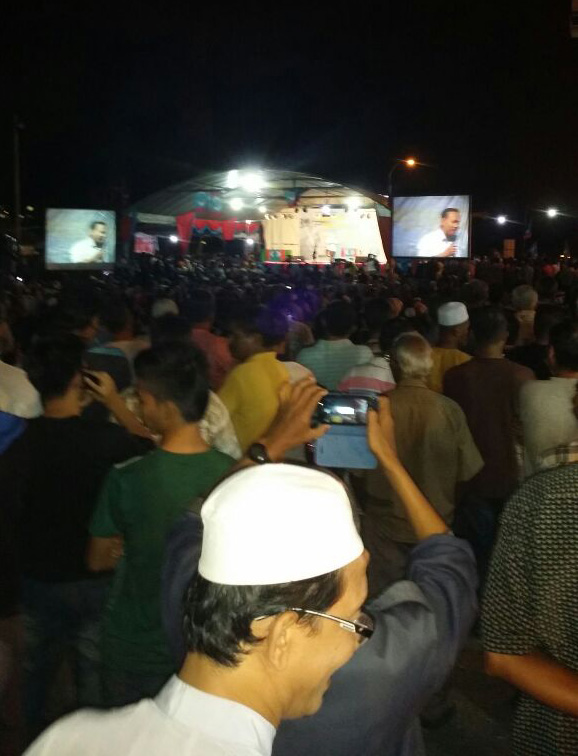 Roads leading to the Expo site are badly congested, making it difficult for more people to get there. 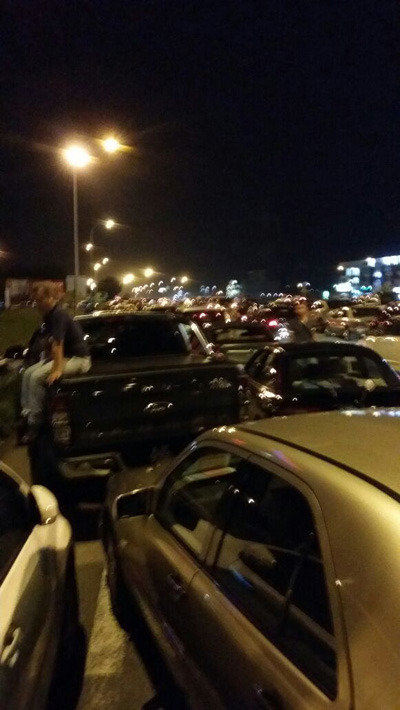 My contact at Seberang Jaya reports: “A helicopter circled overhead a few times. Mat Sabu made a quiet entrance. He was welcomed by Azmin Ali, who is at the mike now. Fiery speeches from Tian Chua and Rafizi followed by an equally fiery Azmin. All making fun of serious topics of GST, 1MDB, penyelewengan, the lavish lifestyle of you-know-who. Three speakers tonight have common credentials – they’ve been in the lockup. Azmin is talking about his recent visit to Anwar in prison, bringing a message from Anwar to Permatang Pauh folks to “berjuang lagi”. And now he’s announcing Wan Azizah’s arrival. Mat Sabu takes over the mike Lim Guan Eng arrived. Pemuda Pas presented a bouquet of flowers to Wan Azizh for Mother’s Day. Azizah speaking now. The crowd has swelled a bit more. Cars are stopping on the highway nearby – traffic there has slowed down. She is soft-spoken but strongly confident. The ceramah has to end by midnight The rally ended on a high note. All dispersed quietly and the crowd was well behaved. Though there was a massive jam, the situation is under control. Not a single uniformed cop in sight. Earlier, in my neighbourhood, there were three cops standing at the roadside with their motorbikes. But they were just lounging around, just to show a presence. At 9.15pm at Lengkok Tenggiri food court, I passed a BN ceramah. Audience: 30 people. Further down, a Jalan Tenggiri public basketball court, there was a BN-sponsored buffet dinner with a crowd lining up for food but no speeches. What kind of campaigning is this?” Over at the BN side …

– but how many of these are resident voters and how many imported for the campaign?

“Anil, there is no doubt PKR will win and win convincingly!

I was at Petron Jalan Tenggiri where BN and PR have their operations booths opposite each other. As usual, the BN side had nothing to say and no one bothered to listen to them. They were blaring those patriotic songs very loudly, perhaps to disturb the huge presence of PKR supporters and workers.

They were distributing mailers on 1MDB, Altantuya, GST and a lot more. And mind you, I observed out of 10 cars, eight stopped to receive and read the mailers.

Another thing I observed in Permatang Pauh opposite UITM today, was some people (SPR officers?) stopping at a PKR booth and instructing the guys to take down posters with Najib’s face bearing the question, ” Is the GST money meant to pay off the debts of the gomen”?

How funny, PKR putting up Najib’s poster when BN is not doing so! Those were solid big posters and very prominent. Perhaps, Najib’s presence will make Permatang folks love PKR more?

And there was an incident where I had my nasi kandar yesterday, at the warung besides the mosque. Some idiots came up to stir trouble saying they are (a) pro ulamak group, and with their loud-speaker said they would not support any party that does not support hudud.

(But were they really from Permatang Pauh Pas?)

Immediately, they were told to leave by a group of man who had been sitting in the warung. This is a solid Pas area and from their reactions, I can assure you that PKR will win handsomely. Their majority may be reduced but it will be a good win despite all the difficulties and sabotages!

The folks in Kubang Semang love PR well, telling those trying to create a stir, “Leave, this is a solid Pakatan area”! How heart-warming and reassuring!

MCA? MIC? Gelakan? I think these parties should just fold up to save the faces of their founding fathers. There was no reception for them at all. It is indeed a torture for members of these parties to “campaign” for 14 days when there are no listeners or supporters…

It will be a good win for Kak Wan, no doubt about it. In difficult times like this a win of any majority is an achievement, understanding the abuse of many acts against opposition lawmakers by the authority.” 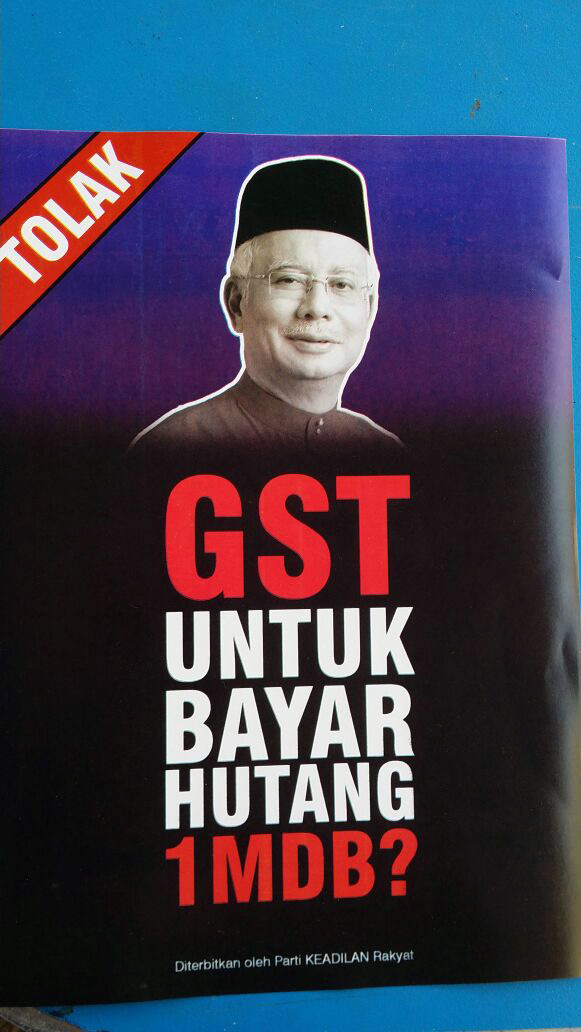 Awang Selamat seems to be highly confident but that’s not the message I am hearing. I have not joined the ceramahs even though I live not too far from PP but decided to avoid it due to work commitment and also due to jams. However from what I hear from DAP friends, they are not that confident. They say winning is likely but unlikely to get the same majority, perhaps around 5k the max. For sure the outstation voters are staying away and many residents will not turn up to vote. This will affect PKR more than BN. The GST… Read more »

Calvin ; Certainly agreed with you. At the height of last election Anwar could only garnered an 11,720 majorities with an 88% turnout, how the else could Azizah garner more than 12,000 majorities as predicted by Hasnon when turnout will be about 70%. I would say it will be a toss up either way.

When you hand up a poster like Malay pay more GST or Chinese pay less GST, that is racist because it is using and refering to races to stir emotion among the races to get votes. This is very despicable

You should have advised MCA’s Wanita Heng not to make those racist reference in the first place.

Although today has declared a holiday, many companies are not adhering to it with the exception of govt department and multinational. Most small and medium size company including factories are working as what the bosses are saying. Don`t play politics by wasting our resources and manpower. The turnout will be low at about 70%. This by election is a cliff hanger and could turn any which way. PAS supporters are not coming out by the droves couple with many Chinese voters who will stay away. We should not believe too much of what has been posted as the above comment… Read more »

Penang Hokkien-Lang should watch this to understand why corruption-tainted parties can never win the hearts of the people.

Sad to say, but in a society like ours, corruption may take a back seat against issues such as race and religion. Thankfully, the Gen-Y and an increasing number of Gen-X populace are becoming better informed about the destructive effects of corruption while simultaneously realizing the hypocrisy of those so-called racial or religious champions, especially those who are living a decadent lifestyle of wealth and exorbitance.

awagn is not telling the overall picture. He is taking one bit here and there. Can`t blame him as he is a PAS hardcore sypporters. This should enlighten you

Hmmmmmmm…. TMI pubished a Bernama report at 8:35pm last night about the EC taking down “hundreds” of “racist” posters / banners. Racist? Nothing to do with Najib and GST, I hope.

PKR’s billboards getting on BN’s nerves: