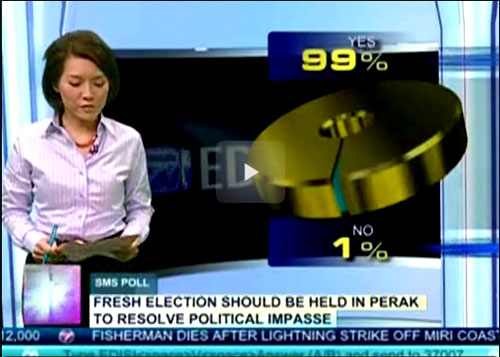 The results of the SMS poll over the 8.00pm news on ntv7 yesterday

This evening, the women’s wing of PKR launched a signature campaign to lobby for the dissolution of the Perak State Assembly. They aim to collect a million signatures within a week – Kinta Kid has the story here.

An SMS poll conducted by ntv7 on its 7 Edition (English news) bulletin at 8.00pm yesterday revealed that an astounding 99 per cent of viewers want fresh elections to resolve the political impasse in Perak.

If you doubt the accuracy of the ntv7 poll, consider this:

The ntv7 poll results are identical to the separate poll findings on this blog, which also reveal that 99 per cent (of some 2,500 respondents) want fresh polls in Perak (90 per cent of you want state-wide elections while 9 per cent want by-elections for only those seats where defections occurred).

Win the battle by all means, Nah!Cheap. And as quid pro quo, lose the war baby.

Time, to UMNO now, is like a wild wire.

The longer UMNO take to dissolve the state assembly, the fiercer this wild fire rages.

I just want Perak to be peaceful once more.

DISSOLVE THE PERAK STATE ASSEMBLY NOW OR THE RAKYAT DISOLVE YOU COME GE13!

BN to move a vote of no-confidence on Nizar, who according to their own version is no more a legitimate MB! If they do, then they accept that Nizar was and still is the rightful MB together with his EX-CO to this day. And by virtue of that they ALSO admit that Zambry and his government was an ILLEGAL one all this while ….. PLEASE DON’T MAKE THE WORLD LAUGH AT YOU … !!

I think His Majesty has made up his mind and there will not be any state election.

PM Najib and the UMNO/BN is sinking in deep s…. From their arrogance and self-denial attitude they are doing the Opposition a great favour in winning more votes in coming by-elections and GE13.The Perak political crisis is destroying them and I believe this is going to be Najib’s Waterloo. History has proven time and again that ‘peoples’ power’ will prevail at the end of the day.The biggest mistake is that the UMNO/BN idiots thinks that the rakyat will easily FORGET and FORGIVE come GE13. I can assure them that this would not be the case this time. Too many 8… Read more »

How about you MCA and Gerakan ??? Still want to cling on …..

I am a Malaysian who has been residing overseas for many years. The manner the Speaker was forcefully dragged out of the Legislative Assembly and locked up is a TOTALLY DISGRACE on the part of the perpetrators. We used to laugh at the Taiwanese and Korean Parliamentarians who resorted to violence in their Parliaments. Now, we Malaysians do the same shameful thing. My friends here just shook their heads and laugh at us Malaysians. May the PM do the right thing, cut your losses and call an early election and resolve the matter once and for all. Let the rakyat… Read more »

BN is really disgusting.They can think of all sorts of dirty and unbelievable tactic to grab power. I am very sure that BN is hopeless in Perak, and from here all the negativity of BN is fully shown. It has lost the confidence of the people nationwide. Not only state-wide election that I agree but general election (Whole Malaysia) since I believe that BN has lost its popularity in majority of Rakyat Malaysia following all the stupid things done by them in Perak.

Ppl, ever noticed that there are an even number of Palim. and state seats? Shud be odd number. SPR never thought of wat will happen if the when opp and bn equal no. of seats?

fresh elections is TOO costly : our blood money !
by-elections for the 3 sinful toads tercukup lah !!

The Misconception-PERAK FIASCO-by Charlatan. The public must be made to understand the position of PERAK State Government. It is not a problem. A 1st.Year Law Student is able to solve the problems. People who are learned, not so learned or ignorant in laws try to delve in the fiasco. They are wrong questions and get wrong answers. Many try to be too clever. They must refer to Perak State Constitution and Parliamentary practices of Commonweatlh Countries. The practices are known as ‘CONVENTION’. Basically members of Perak State Assembly, may vote to express that Non-Confidence in Menteri Besar Nizar. So what?… Read more »

zambry-mandela-gandhi-king-mahatir will do anything just to keep the MB post.

Holding a fresh nation-wide election would restore the image of UMNO-BN. They may lose badly this time but they will win back people’s respect whcih should augur well for them in the 13th general election.

Weary of Elections ? too many by-elections ? Quote : Many, especially from BN, are lamenting that we have had an unprecedented number of by-elections since the last general elections. Let us take a brief look at what triggered these by-elections. Kuala Terrengganu, Bukit Gantang and Batang Ai – Death of the concerned assembly persons by natural causes, something all parties agree as an unavoidable factor. Having said that, I do not recall any other time in history when three assembly persons died within one year of their five- year term, do you ? Perhaps the Health Ministry should consider… Read more »

NEXT; Instruction from the EVIL…Ban all poll on Perak Election to all public media. List of thing you can’t do in Malaysie include ‘No mention of Tuya’, No black shirt, No breakfast near State Building, No vigils, No show of Speaker being dumped, No this, No that. This is call ‘Freedom, My Way’…’Freedom, The Old Senile Horse Way’.

Even a less educated man will tell you what is the practical solution for the Perak political crisis…Obviously, Umnoputeras
are more concerned with their pride. They are not in favour for a State Snap election simply because, the fear of UMNO Ketuanan Melayu be humiliated in a massive PR win!

Will the minister of info ban TV polls? We’ll see.

The percentage is quite mind boggling. I think this spell trouble for BN and I don’t mean just losing Perak in a by-election. It shows how much people are now anti-BN. Normally in a poll like this, there will be quite a significant number of BN supporters who will support the party action even when they think it is wrong. I think Najib has dug himself deeper into a hole and one that will have repercussion in the next general election. This is not just Perak itself but the way the BN is running the country. BN still don’t get… Read more »

They will spin that the sms vote is rigged by the evil Pakatan and (maybe)…. punish the newsreader of NTV7 who did the show.

remember the Muhiyiddin’s rambling that the media dun understand BM? Its always somebody else fault?

btw, Mahathir thought we still using 8MB RAM in our mind, actually we already upgrade to at least 2BG. I think only UMNO using 8MB RAM and 386 CPU.

Next time just ask court to decide who is the next MB, no more election for Malaysia…

Any which way you plan but loose.Cents wise dollar foolish. the Bolehland style.

Whatever little credibility left is beyong salvage day by day as you drag on and on..

There’s a calm before a storm……