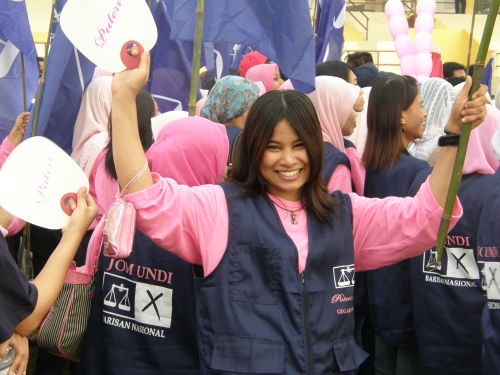 PERMATANG PAUH – While many people were trying to get to one of Anwar’s ceramahs last night, I stumbled upon a BN/Umno ceramah along the main road from the town centre.

It was in full flow with a crowd of 200 women and men – seated in separate sections – in the porch of a wooden double-storey building that houses the local Umno branch. Nearly all of them were Malay/Muslim.

I stood close to the main road, outside the house – I was not sure if I would be welcome – listening to a couple of the speakers: a Dato and an ustaz formerly from Pas.

Anyway, I needn’t have worried. A friendly man, noticing I was standing outside, brought me a chair and a bottle of mineral water. “Come in, have a seat,” he said, placing the chair at the back of the crowd.

Among the points that were raised by the speakers:

Half-way through the ceramah, the mike went dead – but it was soon revived. And then, this time from the main road, the speaker was interrupted again – by the roar of a convoy of about 100 motorbikes, some of them with BN flags fluttering in the night air.

“Ah, the young people, elections are like a festival to them and they go around honking on their motorbikes.  Let them have their fun. In the old days, we used to go around in our bicycles; the only difference is that back then we didn’t have horns to blare!” said the ustaz, as the crowd chuckled.

Remember DSAI sweared in 1998 and he still taken to prison. Dont be fool by BN lies. Follow What is right as the ULAMAS have preached.Dont listen to the BN and UP-no wrong teaching. E.g You have to follow what a mechanic advice concerning your car engines not to a doctor or lawyer or others who claimed even they have higher education.
why should DSAI follow the stu**d DENS OF THIEVES WAYS…

Anil,
Thanks for the trouble to fill us in on the otherside. I’ve come to treasure your blog-site, your energy and spirit of Malaysia. We have started the ball rolling, awakening the spirit of Bangsa Malaysia across the race and creed. My insides warms with pride at the spirit of Bangsa Malaysia and my heart is starting to beat with the Kompang, Indian Drums of Makkal Sakthi, Chinese Drums of lion and dragon dances. Lets start the Banghra, Ngajat and Sumazau together with the gendang and gamilans….wee hah..

again … UMNO for Melayu only and that do not even cover the rest of the Bumiputras…. so after so called 50 years of plundering their own Melayus in the name of ‘helping’ them … we still have 200 idiots willing to spend time listenning to their crap and BS. and mind you they said vote for BN – hello BN consist of Melayu, Cina, India, Kadazan, Muruts etc not only Melayu. the correct phrase the speaker should use us vote for UMNO. The rest of the non-Melayu parties in BN is a piece of ****. Speeches like that also… Read more »

thanks for the report.

i’m sad to see BN/UMNO has never touched on what they can offer how they can deal with all the critical issues (inflation, ruined legal system, severe corruption, stagnant economy) we are facing. but badmouthing PK to the fullest.

but that’s what they only capable of.

Sometimes I wonder whether BN’s speakers have anything to tell the audience if they do not speak on racial matters.Can’t they dwell something on corruption eradication,poverty eradication,economic development and improvement of infrastructure of the area etc.DSAI has touched on all these topics but BN’s speakers offer nothing except character assassination and instigate racial sentiments among various races.

BN makes itself irrelevant to Malaysians,luckily we have Pakatan Rakyat to our rescue !

What do you expect from a BN ceramah? Same old half baked logic, except that it’s even less convincing without the editing and voice overs.

and the BN fellas are offering ‘goodies’ again in the form developments etc… (what more can they think of??)

PP is a NATIONAL agenda. it’s not about longkang and jalanraya!

Hi Mr Anil, Anychance of catching a picture of the real prime minister in waiting ie. MR K J in Permatang Pauh. I hope that BN will use their best asset in this match, if not they have no chance, their best asset being the young MP from rembau. A lot of us are quite upset because the media has not been carrying his statements recently, I believe this mentality espoused by some jealous leaders in UMNO that KJ could somehow be blamed for PRU 12 results, has resulted in some of the MSM not carrying his words of wisdom… Read more »

Your country will be be great when you get rid of the racism and a new progressive developed country will be born and respect will return to Malaysia internationally. Malaysians of all class will prosper because resources will be used to the max without corruption and every family will have a good life. Gone will be the days of evil racism. The case against Mr Anwar on the sodomy issue is non evidence and will not stand in a court of law. Everything seems to point that Anwar is innocent.

Thanks Anil for the news update.
I am dependent on your site on this PP By election.

I remembered somewhere in the Mainstream News Paper that Umno claims to have 10,000 Umno members in PP.

Are you suggesting that your understanding of Malaysian politics is above all of us. It is people like you, who is like a frog that lives in a well…the sky, is your whole world! I respect your right to speak, certainly, I do not need you to speak on my behalf. Keep all your opinions to yourself, I have a very good mind, very capable to access Malaysia political situation for myself.

Thank you for your reports. I click your site several times each day to read the latest.

Hie Anil, thanks for the insight. I’ve listened to both sides’ ceramah at various points in my life. I think most of the comments here are from those who have never set foot in a ceramah except if it involves Anwar. If they did, they would realize that PAS would play to PAS’ crowd, DAP would play to their crowd, and PKR would also play according to the crowd. That is normal in politics, and let us not be blinded of the fact by our partisanship. In any case, though we are from different political affiliation, I believe you’re doing… Read more »

the majority of Malays and Indians are behind DSAI !

just go all out and vote DSAI your MP and our next PM of all Malaysian.

long live DSAI and may god bless you and your family.

Anil, the more visits you make to BN ceremahs, the more lies you will hear…or, sodomy or the Quran swearing. Is that the best they are able to offer?
Don’t they care about the economy, reforms and ridding out corruptions …ooops! I withdraw corruptions…just cannot ask the bees not to produce honey.
I hope, you were served with a little bit of snacks and a cold drink.

Put an end to this nonsense and vote the BN candidate and GOVT OUT !

BN is committed to see Anwar in Jail. Even a ceramah speaker is sure Anwar will be convicted.

i thot the Botak……..forgot his name……..mmmmmmmmm Oh yes yes Hamid Albar said sedition act will be used if anyone uses race/ religion to win votes……

To all still sceptical about the swearing by the “Al Quran”, kindly be informed that there are no such requirement. This is the malay – muslim thinking and has got nothing to do with Islam. However, just imagined that after all and Anwar does take their challenge and swear as well, will they than agree to stop all comment, apologise to Anwar for all they had said, close the court case and thats it. If that can be the case, well and fine, if not how does it matters. It is a cheap (probably not cheap considering the possible payout)… Read more »

thanks Anil for the article. Anil, what you see in a BN camp it is common.like PKR,of course they gonna stand to the points that gives more advantages on the party side.that’s how politics work.doesnt matter if there are 200 or 50,000 turns out at a ceramah (talk),campaign must go on. “Not to mention the usual BN ceramah…must provide food and drinks. Else I wonder if they can even manage to get half the people to stay there” it doesnt matter if people stick for talk or not.it’s effort that concerns.people who are supporters will stay until the end and… Read more »

Thanks for sharing, Anil. These are the interesting insights we never seem to get from mainstream media, and a lot of other online media either. So, 200 Malay-muslim people listening to messages tailored for them, meant to make their hearts beat strong and fast in the name of Malay supremacy and unity. What is the message that goes to the Chinese and Indian audiences then? I have not heard a single consistent pledge and vision for all audiences from the Barisan. And nothing about development of PP, nothing about development of Penang. Just personal attacks to shoot down the other… Read more »