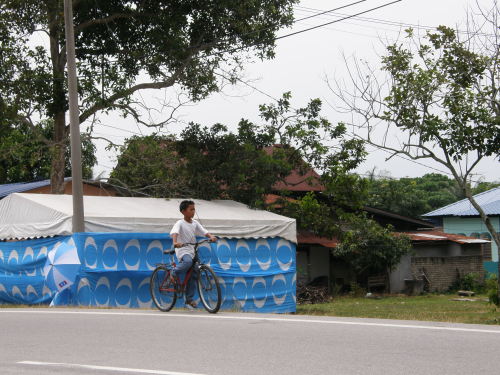 I decided to head for Permatang Pauh yesterday – soon after Anwar was released on personal bond in KL – to soak in the atmosphere here ahead of the campaign. A few more flags had been put up at the entrance to the old town, but it still looked quiet. But that could change soon. On Saturday night, there is going to be another big ceramah, this time in the heart of Permatang Pauh. The stage is set as Nomination Day beckons…

I filed in this report for IPS from a Malay restaurant in the old town after lunch – but not before buying some tempting freshly picked sweet rambutans.

PERMATANG PAUH, Aug 8 (IPS) – It was a humid, sweltering afternoon here in Permatang Pauh on mainland Penang state in northern Malaysia, the scene of what could prove to be a pivotal by-election for the country on Aug. 26.

A lunch-time Malay-Muslim crowd was filling up a restaurant by the main road. Some appeared to be office workers while others looked as if they were from out of town. Women with headscarves sat with their families; a couple of them wore smart office attire without headscarves. Men with smart, bright batik wear stood in contrast with villagers in more traditional Malay attire with white skull caps.

Thursday might have been just another day here in this semi-rural town — but it was not. Hours earlier in the sessions court in Kuala Lumpur, Anwar Ibrahim, candidate for Permatang Pauh, was charged with consensual sodomy with a party aide Mohd. Saiful Bukhari Azlan on Jun. 26. Click here for the full story

Maybe what we are going to see is the demise of umno thanks to pak lah.Hope that this happens in the near future.

There is a survey by The Malaysian Insider on whether sodomy charge on Anwar should be dropped.

If you haven’t read these exposes, then I don’t know what you are waiting for.

DATO SERI ANWAR is back home, a good sign for all Malaysian. God bless him!

The sleepy town, may become the torch bearer for true democracy in Malaysia! The sons/daughters of Permatang Puah have now been given, the honor to be contributors to a historic change, for a better Malaysia.

Er, here’s the part I don’t get. If it was consensual, and not consentual (courtesy of TV3’s Nightline translation last night), what is the complainant complaining about?

How do we describe Saiful then? Anyone?

Try to keep it civil, please.

So, the government is saying that Saiful is a fellow sodomer. Not sure a gay but surely an interested party.