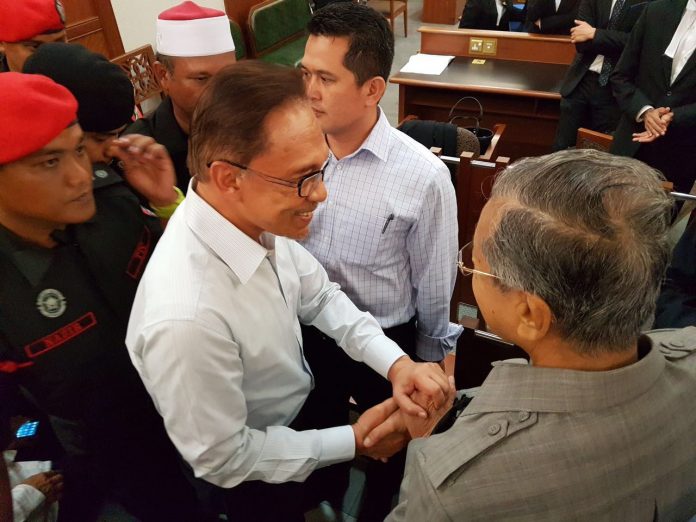 In a remarkable turn of events, Mahathir has told the Guardian that he would have “no objection” to Anwar becoming prime minister.

He also said Anwar should be allowed to contest in the coming general election.

An excerpt from the Guardian report:

“In the case of Anwar we can make a case that he was unfairly treated. The decision of the court was obviously influenced by the government and I think the incoming government would be able to persuade the King to give a full pardon for Anwar,” Mahathir said. “In which case he would be able to participate in politics and become PM. I can have no objection to that.”

While some of us may not be able to forgive Mahathir for what he has done, this turn of events perhaps represents the best opportunity to move towards a new politics that will enable us to come together and tackle the real issues plaguing the country – instead of being bogged down by the divisive old politics of race and religion.

I used to be critical of the Mahathir administration, for the way he treated his critics (Operation Lalang), crippled the judiciary, introduced neoliberal policies and allowed crony capitalism.

But if Anwar can find it himself to forgive Mahathir – even if it is for political reasons – then maybe it is time to come together for the nation. We won’t get anywhere with the present brand of politics. If anything, we are sliding fast by the day..

Mahathir’s latest remarks are a major concession, short of (or perhaps equivalent to) a full apology to Anwar.

Indeed, he has come a long way in making amends for his past: meeting Anwar in court, participating in Bersih 4 and 5, and now leading Bersatu into the opposition coalition.

Now, if Mahathir can find it in himself to apologise especially to the ISA detainees and the suspended judges (and their families), who suffered enormously, his stock would rise immeasureably. It would be a huge step forward in his rehabilitation – and redemption.

Please do it, Dr Mahathir. You have nothing to lose – and everything to gain.

DAP issues 48-hour ultimatum to RoS http://www.thestar.com.my/news/nation/2017/07/12/dap-issues-48-hour-ultimatum-to-ros/ PETALING JAYA: DAP has issued a 48-hour ultimatum to the Registrar of Societies (RoS) to serve notice to the party to hold fresh election for its central executive committee (CEC). DAP nation legal bureau chairman Gobind Singh Deo said the RoS had yet to serve any official letter to the party as of 1pm Wednesday since its director-general Datuk Mohammad Razin Abdullah came out with a media statement on the matter last Friday. “I give the RoS 48 hours. If it doesn’t, either by letter or otherwise, respond by the end of office… Read more »

The cost of living has surged and the opportunity to earn more money has declined. GST, weak ringgit and infloods of illegal worker taking over many odd jobs. The only defence Umno is putting up is to destroy DAP, discredit Mahathir and gang and tempting PAS over. Not to forget borrow and give out more. Umno has no corrective surgery for its problem. Only short term relieve and the demonisation of the oppositions. You can fool everybody sometimes but not all the time. The time has come. The force awakens. Looks like RAHMAN prophecy will be fulfiled soon.

Mahathir’s remorse and his endorsement of a legally untrammelled Anwar as Harapan’s PM-designate clears the way for the coalition to settle on a leadership line-up, a common logo and manifesto for recognition as a political entity by the Registrar of Societies (ROS).

There remains the delicate matter of seat-sharing negotiations among Harapan components, but this is more malleable to resolution than Mahathir’s incorrigibility and Bersatu’s dissent on Anwar’s designation as Harapan’s choice of PM.

Kalau anda betul-betul Anak Jantan, no need to sweat to resort to deregister your opponent’s party before the GE14.
Let the wise Rakyat, untainted by ‘$$$bribes’ & ‘Ko-Tai’ + K-pop Gangnam shows decide at the polls.

DAP: ROS out to cripple party before GE14 with re-election order
https://www.malaysiakini.com/news/387871
Only a coward employs such ‘ke-bo’ tactic to cripple an opponent (he knows he cannot fight nor want to fight) before setting a foot into the ring.

The good news, said Zahid, is that that the ROS will not deregister the party.

The bad news is if DAP doesn’t hold its central executive committee (CEC) re-elections as instructed, they may not be able to contest in the next general election.

RoS action: Why now, asks Guan Eng http://www.freemalaysiatoday.com/category/nation/2017/07/07/ros-action-why-now-asks-guan-eng/?utm_source=feedburner&utm_medium=email&utm_campaign=Feed%3A+FreeMalaysiaToday+%28FMT+News%29 GEORGE TOWN: DAP secretary-general Lim Guan Eng says the Registrar of Societies’ (RoS) announcement that the party re-election held in 2013 was not valid is “a little weird”. He added that the shock announcement would “definitely affect the party’s preparation for the next polls”. “We feel a little weird (pelik sedikit), as we had gone through a re-election process in 2013. It has been four years now, why again now? “We want an official letter which is likely to be delivered to us today… this is a serious matter and we are… Read more »

ROS to 4 years to make decision, what kind of productivity and efficiency?

The state in big mess. Still a majority of Malaysians being ignorant of the corruption and moral decay at every level of society. Many senior ones care more of dedak-brim to afford food [can’t blame them as their children ignore their needs themselves trapped in barang naik predicament] while the young ones more concern with smartphones n easy money schemes.
Others too overoccupied with bashing ‘niaokong’ and forget the real issue which going to affect generations to come with escalating debt resulted from abusing fund leakage mismanagement.
Time to wake up and be ready for potential bigger blackout!

No one politician = the whole of Pakatan Harapan. The same for Niao Kong, which has to buck up & be less arrogant. Otherwise, its demeanour can cost a lot to DAP & PH. Just observe the news of attacks on Niao Kong recently. And be more caring of Penang environment in the pursuit of development. Otherwise, this & many other issues can become DAP’s Achilles heel. We will never get a perfect politician, but we can hope for politicians to change this country for the better. And the most urgent is defeating BN & pursue the Biggest Thief &… Read more »

LGE should not hold on to Penang CM even if Rocket wins majority of Pulo Mutiara. If he has layout major good planning, his successor can succeed him to be the new grandcat.
Gelakan and MainCA in the minds of locals care more of personal business agenda when in office so unlikely to have major impact.

Not to say LGE has no leadership quality (we look up to since 308), but he has to fine-tune his acts & improve his EQ (for Penangites of all strata).
His ‘bravery’ to lead, his intelligence & fearlessness to challenge BeeEnd we have no qualms but supportive for him all the way.

Human DNA cannot change regardless of what strands of injustice, evil or malevolence are planted into it, but here we have one that have already changed.
Raja Petra, you lost my respect for you.

Mahathir has told the Guardian that he would have “no objection” to Anwar becoming prime minister.

This is the beginning of Nightmare @ Putrajaya Street for Naik Jeep.
A new chess move so unexpected that it requires Blue Ocean Counter-Strategy by his Putrajaya Bugis-trained warriors.

This was an impossibility in the 2008 Election. Now, is the golden opportunity to forgive Mahathir & support Pakatan Harapan to ‘finish off’ Bee End in the coming election.

Let’s hope PH is heading in the right direction without further squabbles.

For many, this could be the most happy dream before GE14.

I would like to inform blog readers of some free e-books I have written:

Then click on the links to my free e-books i.e. Leading Issues in Health Policy; Progressive Health Economics; and Introduction to Progressive Political Science.

It will be good if your ebooks are also available in Bahasa version so that majority in Malaysia are able to move away from destructive feudalistic warlord politic$.

Good idea. But my BM skills are not up to the mark.
From the English-educated generation.
Maybe some volunteers can assist ?

I may also write a couple more i.e. Public Health for the Masses;
Comparative Sociology. The Public Health book will also touch on environmental
crimes such as the rare earth plant in Kuantan, bauxite mining

Need a credit in SPM Bahasa Malaysia to cari makan (including contract renewal in RTM) in the bloated civil service. Phua can try to apply to sit for single BM SPM paper this year, at least tonprove a point?

I already got a Credit for BM way back in the mid 1970s 🙂 We called it MCE (Malaysia Certificate of Education) and not SPM then. For MCE BM, we also had to pass an oral test in BM (called Lisan) 🙂 In those days, no credit in MCE BM means that a student cannot go on to do Form Six. One of my Form Five classmates failed MCE BM and had to repeat Form Five. But he was one of the first of us to get a PhD (in biology) from a world class university in a western country.… Read more »

Not surprising that in those days (of the 1970s, esp 1975), some of the brighter students of non-bumis got no credit or a fail. Hard luck to say that.
But many went on to prosper in careers of their choosing either overseas or in the private sector without banking on a BM Credit. And even never use BM in their lifetime of workload.

Karma is very fair to those who are discriminated in life.

Is there any requirement for GE candidates to have at least grade C in SPM/MCE Bahasa Malaysia?