Pas leaders have urged their youth divisions in Perak to be prepared to play a key role in the next state election. 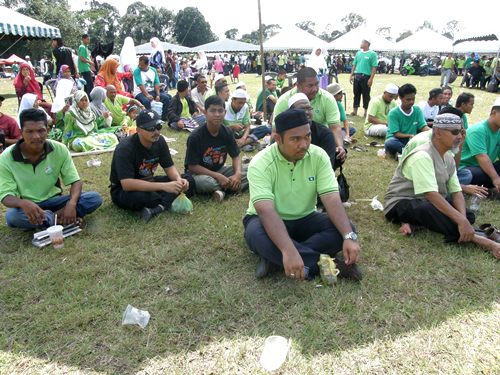 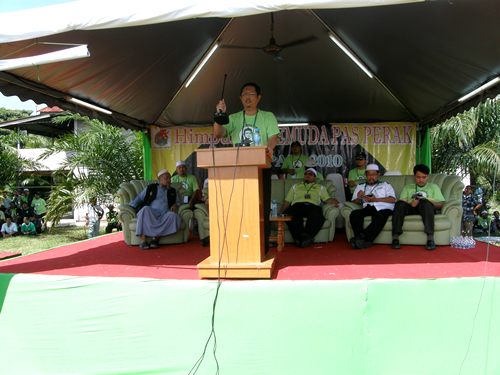 1600: The event ends with the youths taking an oath to work hard to oppose Umno in the next state election.

1540: Mahfuz, a addressing the crowd of about a thousand, says the youths have an important role to play in transforming the nation. He knows the youth are enthusiastic for not only Perak but the whole of Malaysia to come under Pakatan in the next elections. The outcome of the next elections, however, will largely depend on the younger generation, the new voters.

1530: Nizar asks the crowd, who is responsible for the cow-head and the boar-head. He says people are not easily fooled, but warns them not to succumb to any provocation. He reads a Quran’ic verse about God who has created diverse tribes from male and female so that people can respect and get acquainted with one another. 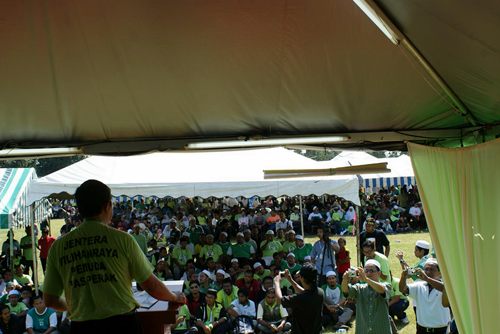 Nizar rejects Umno’s “ketuanan Melayu” politics in favour of the “new politics of Malaysia”. The Pas youths are soaking it up.

He then leads the crowd with chants of “Bubar, bubar, bubar Dun Perak!”

1520: As Nizar speaks, a Perak-based journalist standing near me tells me knowingly that a snap election is a distinct possibility. Nizar, on the stage, rallies the crowd to oppose Umno.

1520: Nizar refers to how Umno has been using the Allah issue to stir communal sentiments. He laments that Pas had been maligned in the past as an extremist party – which made many of the non-Muslims reject Pas. But since 8 March 2008, he adds, many non-Muslims have been able to see Pas policies in practice and they are now more comfortable with the party.

1510: Nizar, referred to as “MB yang sah” takes to the stage, as youths at the back ask those in front to sit down so that they can get a better view. Nizar takes an immediate swipe at Umno for “betraying” the people’s interest.

Election fever is beginning to grip Perakians. The women folk are fanning themselves with folded sheets of paper to keep away the heat.

1500: About a thousand Pas supporters, mostly youths, are looking forward to speeches by Nizar, Mahfuz and others. I am seated in the field as the the speaker leads the crowd in cries of Takbir! No official announcement of any election date has been made, but that hasn’t stopped youths wearing their lime-green T-shirts with the words “Jentera Pilihanraya Pemuda Perak” on the back. The event is dubbed Himpunan Pemuda Pas Perak 2010 or “Hempap 2010”. Hempap indicates some sort of ‘wrestling match’; it is obvious that Perak Pas doesn’t want to be caught by sucker punch in case of a snap state election.

A teenager sitting on the field in front of me is also wearing a lime-coloured T-shirt. Beneath a small logo of Pas are the words “Orang Muda Geng Kita“.

1450:Greetings from an open field in Kubu Gajah, where representatives of Pas youth wings from all over Perak have gathered under a sweltering afternoon sun in the rustic rural setting of Selama, northern Perak near the border with Kedah.

I think we ought to give PKR a chance. Yes, i agree that they may not be the best and they may not be better than BN if they took over the government. But, if we dont give a change to PKR and to show us what they can do, then we will never know what they can do. If PKR did win, I certainly hope that they will serve all the Malaysians (regardless of race) well, afterall they have only 5years to show results and prove themselves. If we continued to support BN instead, we probably be treated the… Read more »

O, can i say you are a very selfish person, only think of you and yourself… I was frustrated with some of the the people in PR and i would like to see Zulkifly (Kulim MP) sacked as well, and indeed, those bad apples should all be sacked… However, we still have many outstanding politicians in PR, like Nizar, Khalid Samad, Zaid, etc. O, we should not give up so easily… I came back because i see some light finally… and I really want a government changed, i cant stand that rotten BN anymore… So,let’s fight for a better tomorrow… Read more »

Kee, Lawan Tetap Lawan! You see, I was frustrated with the way justice was delayed on the Zulkifli guy, because to many it is a sign of weakness. Then sure enough, this Zahrain guy came, and he has the guts to tout the other MPs to return BN the 2/3 majority. Yet, no action was taken, it only gets to show how weak PKR is, then sure enough the joker from Nibong Tebal came, you know this joker is such a shame! He has got no followings and support at all…but, yet he continued… Yes, I must say I was… Read more »

Dalbinder!With corruption,cronyism
happening right infront us,you still say
PR is bad?Let’s give them a chance
for them to prove their worth.

YB Nizar, you are THE one to lead in Perak!

Dilbert Singh! Grow up… You are still very wet behind your ears.
I presume you are one of the products of the BTN programs. If you have seen the mess we have gone thru’ then you will know how much the rakyat have suffered under the Dr M era and his successors. Were you even born during the Ops Lalang era? Did you live thru’ the Nov 19 Tragedy of Memali?
Have you seen how innocent people were dragged into Kamunting just because they said Dr M was wrong?

Without a doubt, i want PR to win and Nizar be the MB of Perak as he is fair minded and much loved by the people of Perak.

… how many judges there are bold enough to uphold justice???

What if BN still refuse? Najib’s job is at stake. He will not let it happen unless he absolutely has to. He don’t have the … to take even a bit of risk on this one. Only way this can happen is that Muhiyiddin backs pressure group within BN to do it to topple Najib because Muhiyiddin have lost confidence Najib can lead GE13..But its a big gamble even for Muhiyiddin..

Even if the court rule in their favour, they need to take this frenzy to another level. There is gameship here that is getting hairy…

You are spot on Nizar, we heard you loud and clear!!

It’s gonna be quite an uphill battle, with all the nonsense going on in PKR now. Minimize the PKR candidates if elections were to be held.

Most of them are still UMNO goons.

Even if the judment sided PR, the … the state election (could be held) just after the CNY maybe around 19 february (which means) outstation voters cannot make it for voting….

Pakatan Perak must fall even if elections are held. Good lesson to PR. ask nizar ang geng to declare their assets first as promised!

Letting Zambry … to win. No wonder Koh can be CN for 18 years. Because some eeeee……

Dalbinder,
Before you ask Nizar to declare their asset, why not you ask your PM Najib …. why … people who are corrupt (were enticed) to usurp democracy and the peoples right….. Isn`t that worse than declaring one asset.. Yes UMNO must fall after 52 years of corruption and arrogance. … HOPE THERE WILL BE A MIRACLE THAT SOME OF THE JUDGE WILL TAKE A FAIR STAND.

Yang,
I think we should be too hard on Dalbinder Singh. He’s not BN folk

Yang bro, I think I am also seriously thinking of supporting BN this time. You see, those PKR fools within PR are giving us such a headache every day. Why must we be played out? Should we not concentrate our time on our business and make more monies and when the time is really too bad, we just pack our bags and flee? I think it is better to be happy than to be bothered about democracy and spend hours of our time fighting for them, and then these elected fools make us look like fools? Looking at PKR where… Read more »

O, In any political organisation, there are bound to be rotten eggs. I understand you must be sadden by the need of referring Zaid Ibrahim to the disciplinary commitee. Anyway, perhaps, we should look at how magnanimous Khalid Ibrahim of willing to sacrifice himself for the greater good If you were a christian, you would have come across the christian matryr in the book of Acts. The point is justice being done. O, I felt political organisation must be judged by how top leadership resolve issues such as these. Otherwise, they won’t be any different from any organisation. In fact,… Read more »

finally you have proven yourself as repetitive parrot that take message from your master, i.e. the most wanted RPK.

Gerakan K, Syiok, right? No, I was just disappointed with DSAI for not taking immediate action against the culprits. We need to be decisive in matters concerning discipline, and today, you see, the joker from Nibong Tebal? These are politikus, yet they are threatening… Perhaps, he will join Gerakan or the new Parti Cari Makan? Ooopppsssss … sorry, it is Parti Cinta Malaysia, like Thai rak Thai? Do they have a Thaksin there? If not, they will not last one election. Good for Gerakn to accept these politikus. No, bro, you should not say I am taking message from RPK.… Read more »