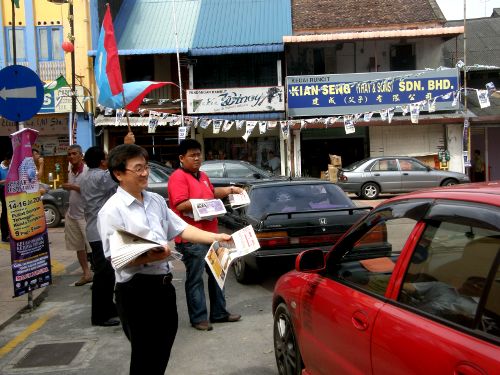 1130: We walk into the Chinatown area, at Jalan Bandar, not far from Hotel Sri Malaysia and immediately spot about a dozen PKR politicians canvassing passing motorists. Among them are Elizabeth Wong and Tian Chua.

“We are confident of (Jalan) Bandar (Kampong Cina) area,” the folks tell me. About 60 per cent of the Chinese vote in the bag, apparently. We shall see.

They get a fairly good reception from passing motorists, who have slowed to a crawl.

Jalan Bandar is decorated with BN banners which residents a happy chinese new year, red lanterns next to Pas flags. A big Pas banner proclaims “Pas for all”. It is plastered on the outside of a shop-building. I look to see what business is being conducted inside the shop. It’s a Chinese butcher, selling what appears to be pork…

Further up, another group of about 10 DAP politicians and volunteers are also canvassing motorists. Among them is Bukit Mertajam MP Chong Eng.

They are still talking about last night’s DAP dinner at the Ocean Restaurant with senior Pas leaders the special guests. The Pas speakers found themselves in the odd position of receiving louder applause than the DAP leaders, the DAP volunteers told me. Kelantan MB Nik Aziz spoke so softly that many could barely hear him, but when he uttered a few words in Chinese, they erupted in applause, giving him a standing ovation at the end.

Apparently, many of the Chinese residents here also attended a BN dinner held nearby last night. Great food, and I believe, karaoke too. But after that had ended, they adjourned to the big DAP dinner at the Ocean.

If you cannot win the election, how you gauge the hearts of the rakyat. This is so-called “siok sendiri” syndrome. PAS Terengganu did not win the heart of KT Chinese for its past anti-Chinese policy. Although many alternative political analysts predict PAS will win, I beg to differ with them. I can see through the true color of DAP, PAS and PKR when they are governing parties in five states. PR is no better than BN in many aspects. For instance, LGE used to condemn Gerakan for appointing UMNO Deputy Chief Minsiter when he was in the opposition camp. He… Read more »

We people of KT are not stupid.Where the hell bn has so much money to splash.Definately they are spending our money from oil.Take OUR dinners and moneys but then vote for PAS for the future of our generation.Don’t be taken as fools,ok!

nkkhoo; It is not all about winning an election. It is winning the hearts!!
Elections come and go, the loyalty stays. I am with the Opposition since Merderka till today, have I wavered…NO
Money can’t buy me Love!

Large turnout in “ceramah” does not mean Chinese will vote PAS in the ballot box. LKS shall know better than others in his Tanjong 3 campaign.

It’s that time of the year when everyone says they are for all. Words! words! words again. I still remember the time when I left KT. It was without a Catholic church though we have the land. Till today it is without a church because its presence as we were told would hurt the sensitivity of the majority of the people there. How can all these words be concretised? What harmony and ‘muhibbah’ are we talking about? Reminded me of the beautiful words of our PM, “walk the talk,” but alas.

Hello Anil, thank you for your daily postings on the happenings and your personal view on the coming by-election. Really appreciate it.

Yeah!!! enjoy the good food provided free by the BN … and once finished moved to DAP speeches and come 17 January, please don’t forget vote for PAS.
Have fun KT folks.