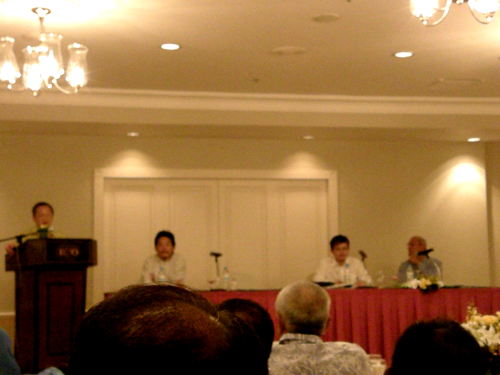 The forum on non-sectarian politics at the book launch

A last-minute letter from Gerakan politician Chia Loong Thye’s lawyers failed to stop the launch of a controversial new book on Gerakan by authors Neil Khor and Khoo Kay Peng at the E & O Hotel.

The letter was sent to the authors during the book launch at the hotel. Issued by the legal firm Lee Hishammuddin Allen & Gledhill, it put the authors on notice that Chia would “claim for any aggravated damages that will arise from the launch of the book….”

The book “Non-sectarian politics in Malaysia: The case of Parti Gerakan Rakyat Malaysia” had already ruffled the feathers of certain quarters within Gerakan even before the launch.

High Court Judge Abdul Wahab Patail had earlier today denied Chia’s application for an injunction to stop the launch and sale of the book.

The book launch – along with a forum promoting non-sectarian politics – proceeded without a hitch in front of a packed hall at the hotel. Among the crowd of about 150 were Gerakan politicians, Penang civil society activists and even “old boys” of St Xavier’s Institution, the authors’ alma mater. The media showed up in full force. All quite extraordinary for the launch of a book in Penang.

Among the speakers at the forum were Gerakan stalwart Toh Kin Woon and veteran activist Anwar Fazal who spoke about the importance of adopting a non-sectarian, universal approach to politics and public life to counter communal trends.

The books put up on sale outside the hall flew like hot cakes and there wasn’t a single copy left.

The initial print run is 2,000 copies. An additional run of 2,000 copies is expected soon.

Oops Anil, ISN’T looking at the monetary side.

I met Mr Netto after the forum by which time you had already left.

Wah …Khoo, Neil you make Xaverians like me feel proud! … because during our time in St Xaviers’ there are no sectarian politics or race base relationship … we are one family and it was the best time of my life until I entered UM ….then the working life and now …in my 30s …every f***ing thing is race race race … St Xavier’s during my, Khoo and Neil”s time is best time … as for Gerakan … I think you better bury yourself lar … you got ZERO people any kind of vision, ability or talent to even manage… Read more »

That Penang has been marginalised by the Federal Government for the past 20 years is really no secret – it’s there for all to see.

Even if the oil price were to hit USD200, Penangites still have little choice but to use their cars given the shambolic public transport system (it has improved recently with Rapid Penang).

Such is the legacy of the KTK administration of the past 18 years. A total flop.

What a disappointment, did you introduce Anil to me?

As a voter in Tanjong Bungah, I do feel Chia Loong Thye’s candidacy smack of cronyism, and that he is given a safe (so they thought) state seat to contest because his brother was the MP there. The brothers’ “combined” candidacies gave a negative impression. Correctly or not, they created a perception of self-importance, well-oiled advantages, aloofness, and a lack of concern for voters who are outside of Gerakan. Many voters must have been turned off by their ill-considered placement of campaign banners that blocked traffic lights in at least three places (both directions) in Tanjong Tokong and Tg Bungah.… Read more »

Hope you don’t mind, I made a mention of this posting in my blog.

By the way, it was nice meeting you in person so soon after discovering your blog.

Well done. Precisely what we need, a non-partisan approach because we need to keep the politicians honest and on notice whoever they are. The game is up for Gerakan. They were warned a long time ago about their loss of usefulness to Penang after they have been in power since 1969. When they joined Barisan they promised to reform the administration from within. But instead bad company corrupted them and they met their Waterloo on March 8. With DAP likely to do a good job Gerakan might as well fold up. Look at how UMNO treats its political allies…now courting… Read more »

Well done, though I’m pretty sure Kay Peng, who isn’t short of a few bob, is looking at the monetary aspect of this. It’s high time we left communal politics in the sunset.

This is what we should expect from a race which lives in the memories of empty stomachs. If we have gotten this far, correcting this aberration should be a walk in the park.