A large crowd turned up at Hulu Kelang last night and listened intently as Anwar highlighted the growing gap between the top 20 per cent and the bottom 40 per cent.

But Anwar didn’t elaborate on the reasons behind the growing gap. Clearly, the gap between the rich and poor began to widen in the 1980s after the Mahathir administration adopted neoliberal Thatcherite policies especially privatisation and the reduction of tax rates for the rich. The gap continued to widen throughout the Mahathir administration (even during the period when Anwar himself was Finance Minister in the 1990s), right until recent years. 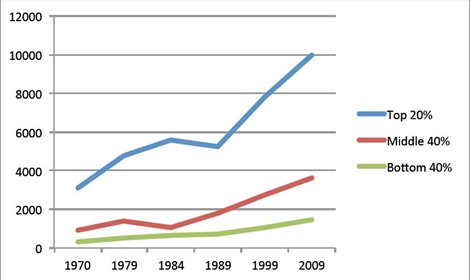 Mahathir now even reflects that he and Thatcher were almost similar in character. That reveals more than he is saying. The autocratic PM followed the ‘Iron Lady’s’ privatisation push with earnest, privatising many areas to cronies in sweetheart deals in a form of state-managed neoliberal capitalism. Like Thatcher, he curbed the trade unions too. Is it any wonder then that Mahathir is among the 2500 guests from more than 200 countries invited to Thatcher’s funeral and will be representing Malaysia? As Wisma Putra said: “”Tun Dr Mahathir, then Prime Minister of Malaysia, enjoyed a close friendship with the late Baroness Thatcher. Bilateral relations between Malaysia and the United Kingdom also strengthened during their time.”

Following the introduction of neoliberal economic policies including privatisation, the gap between the rich and poor has soared in both Malaysia and the UK as well as in many other countries that have followed similar policies. No surprise there.

But clearly, as you can sense from the video above, many ordinary people are feeling the stress and pressure posed by the prevailing neoliberal economic model, aggravated by rampant corruption, cronyism and rent-seeking.

Even in Parliament, they only trot out old figures such as from 2009. It must be a lot worse now, regarless of 1Propaganda to the contrary. Income inequality/distribution is a key aspect of quality of life, though oligarchs and their servants desperately try to distract from this point. “One might feel better about income inequality if there were a grain of truth in trickle-down economics. But US economic growth and median incomes were higher in the decades following WW2. Some argue that increased inequality is an inevitable by-product of the market, but several countries are reducing inequality while maintaining growth.… Read more »

JUST REJECT HIM! He was in the government for seventeen long years But can anyone remember any contribution he made of significance? Try hard as you may with all your blood sweat and tears None, coz he spend his office time not to work but for political machination First he became Minister of Youth, Sports and Culture Malaysian youth were none the better under his management Our sports was at its lowest ebb and our football lost its lustre We didn’t win any gold in regional or international event Then he became Minister of Agriculture for sometime The only monument… Read more »

BN also has janji tidak ditepati. Don’t just say this to Pakatan. If this is not so what so many bank workers are holding their picketing in front of the GLC banks.You think bank workers do not know how to enjoy themselves watching DVDs at home? I heard their union met PM who promised to settle their complaints. After 365 days, this has not been done. Maybe you can help to remind BN of their “janji tidak ditepati”

@WSL: That is what I called election strategy. Johor MB vs LKS is a strategy. Datuk Zulkifli Noordin vs Khalid Abdul Samad is a strategy. And also Gerakan 4321 strategy in Penang. Only smart heads can understand the logic behind of these candidate selection/seat loaning strategy. I know deep in your heart you are worry very much that your supreme idol LKS could be defeated by huge majority. Cool down, rethink the tactics employed by our 1Malaysia PM Najib and enjoy the victorious moment of Barisan Nasional in GE 13 !!! You have nothing to lose when BN win GE13… Read more »

Catfish: “DSAI told the rural malays that each of them only got RM20 to ‘pasang bendera BN’ while the cronyputera gets millions per ali-baba contract.” I’m familiar with Selangorians. Ordinary people are always aware of their own status. Let’s say one day suddenly Petronas wanted to grant you a 1 billion contract. But do you capable to do it ??? Ordinary Selangorians know their status. Their expectation is not in the range of million or billion. While Anwar is “mudah lupa” and poked fun at “RM20” jobs, there are sizable Selangorians are angry with Pakatan Rakyat. I pick the notable… Read more »

Don’t bull… lah. Never try to belittle wise & brilliant Selangor voter with such a stupid nonsense. They rather prefer a claen & responsible state government that can’t promise due to it limitaions & intervention by the dirty BN government than a corrupted BN that only know how to splash Rakyat $ to fulfil all the “Janji” & putting the country in jeopady of bankrupcy. Wonder Gerakan & MCA still relevent to this election as your “big brother” UMNO has stolen most of your seats? The fact is both of Gerakan & MCA have no value & unwinable in the… Read more »

Easy to deliver promise using rakyat money when you are in control of Federal Government.

If Tok Guru has more royalty from Kelantan oil, I bet Kelantan will be as propserous as KL.

In one ceramah, DSAI told the rural malays that each of them only got RM20 to ‘pasang bendera BN’ while the cronyputera gets millions per ali-baba contract. Yet many malays still ‘cium’ tangan BN when they gets the BR1M. Sigh!

The theme of income inequality is being exploited by politicians EVERYWHERE. It isn’t that its not a real issue, the problem is politicians don’t have answer to the problem.. In the US, even as Obama won his election on it, he is still willing to trade away social welfare in order to make a deal to solve the larger fiscal problem. In Europe, they overthrow govt that cut budget and welfare but every new govt still have to do the same thing.. In Singapore, in China, the govts have attempted every means they can but it has resulted in slowing… Read more »

Really, this election is between the haves and don’t have. To the haves, where did they get their monies? It is little wonder that when I spoke to a few of my friends who stayed in urban and semi urban areas, who will have to return to vote during the GE. These guys had to slog it out in the urban and semi urban areas but those UMNO ketua cawangan allegedly do not have to work. When these guys from urban centres come back to vote or return to the village, they can see these people who do not work… Read more »

Yes Ahmad. All Malay, Chinese, Indian, Kadazan, Iban & others let us hold our hands to “Selamatkan Malaysia” in this coming election. Everyone of us must go all out work 200% harder to destroy BN, Ini Kalilah totally wipe them out jadi habuk. Tell all the kampung folk how they have been treated for the last 50 yrs. They take RM5 million & we take RM500. They eat big fish, big prawn & we eat roti. They stay in bunglow & we have no house. They drive sport car & we ride motor. Fair? Adil? Saksama? Adakah lambang “timbang” untuk… Read more »

You are quite mistaken. If you look at the real situation on the ground a lot of poor and very very poor still vote for BN. In fact I would say that most of the upper middle and middle class supports PR while the poor especially in rural areas are voting BN. If PR wants to penetrate these areas esp in Sarawak, PKR and PAS have to do a lot more work.