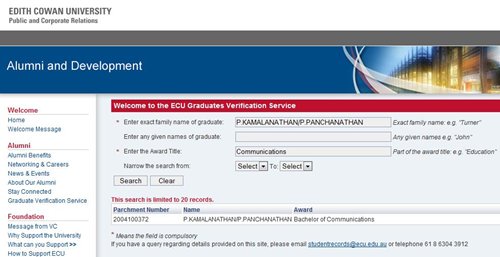 He has also displayed his certificate on his own website. The certificate states he was awarded a Bachelor of Communications from the University on 23 January 1994 2004.

Check it out here.

His name shows up on the Edith Cowan University’s ‘Graduate Verification Service’ search here. Try it yourself using the name ‘P.KAMALANATHAN/P.PANCHANATHAN’ under the ‘Family Name’ field and ‘Communications’ in the ‘Award Title’ field. The conferral date was 25 November 2003. (Thanks to blog reader Y for the heads up.)

Strange that instead of discussing real issues, the campaign has veered towards one candidate’s drinking habits and the authenticity of the other candidate’s educational qualifications (though no doubt there are a few people with dubious qualifications around).

That said, Zaid Ibrahim has touched on the land problems faced by the folks in Hulu Selangor. I hope he follows through on that, whether or not he is elected.

I also got a reply from ECU, counter-intuitively (in light of verification web-page) claiming privacy regulations. Perhaps it’s time we organised a National Fact Verification Service so that institutions aren’t overwhelmed by people checking allegations! I think it’s to ECU’s credit that they are responding to our enquiries. I wish all organisations responded to messages sent to their “Contact Us” email addresses. I don’t understand why people are still clinging to the false allegation. His certificate has been verified by ECU: that’s all that matters. Speculating about the circumstances of his individual certification is invasive, petty and spiteful when possibly… Read more »

Someone from Hulu Selangor and a registered voter there might write to the Australian Ministry of Education to verify this.

If they won’t it speaks volumes for Education NOW in Australia!

If it eventually proves phoney any official parliamentary decision Kala takes part will make it legally subject to a legal challenge.

The Australian MPs who had sympathised with PR might be able to help!

I wrote to the ECU but they would not confirm the results. This is very odd as there is a search engine… the information does not add up.. Dates are questionable.. … To get a degree in 1 year is also odd…. Maybe, there is another Kamal with the same name…

Hi Folks, I think the degree is genuine but the the process is questionable. As an Australian graduate, I know why Kamalanathan name need to be fullname in ECU website becoz the management was not sure which name was correct. So, it just appeared to be in full name. These was so clear that somebody… from Olympia College give some “workout” document to proved the student has completed the course in Olympia to ECU, so ECU issued the degree based on Olympia’s name and integrity becoz of the “twining programme” with Olympia which only happen to be one year, 2003-2004… Read more »

Dear Ulu Selangor Indians please vote wisely. Think ! and Think and Think! Even BN-MIC candidate Kamalanathan (did not go to) local universities, until he have to do twinning degree program with private college. Why? … If only he graduated from local universities or a JPA scholars, nobody will question his degree’s validity. … 11 universities available in Malaysia. This is the truth. …. Indians….. rich, middle class, gov servant or poor have no other choice but to take out their own money to study in private colleges. We have to wipe out BN-UMNO if we want to see justice… Read more »

(He) could have good chance of winning by just being a plain guy.

If Edith Cowan is a serious institution, they would insist on keeping their student/scholar archives of personal details in impeccable condition by sticking to their database system design of family name and given names. One of these days, one of their students might be somebody really of world prominence eventually. As proven by searches, this is avoided when you use Kala’s family name or given name.

In any case how can they give you a scroll when they don’t even offer the bloody course? Neither does Olympia?

i rang the school and they said they never had any twinning program with olympia college.

The only program they had was with Uitm..way back long time ago and has stopped.
.

There is no such thing as long distance or twinning.If they had , i would have known.

I’m one of the few Malaysians in this school..mostly private students. And i was there when the claimed degree was conferred.

he said he never set foot in OZ and there is no twinning program. How in the world did he get his degree?

Can you get Y to confirm the same Cert holder is the same Kamal we all talking about ???….by

Using the DOB or IDs of Kamal for double checking as most UNI does to comfirm ones status (tally). Surely the UNI have all the corresponding records if the names are spelled wrongly.

I like your comment on Zaid`s promise to settle land issue……..Sounds very familiar. PKR is going to get burnt second time around…..

“really clarify things”
This story is an ex-story. It has passed on. It has shuffled off its mortal coil. It has snuffed it, kicked the bucket, popped its clogs. It is now 6 feet under, pushing up the daisies, sleeping the eternal sleep.

‘Although Kamalanathan’s actual student record was no longer available, Tan Chee Seng, the school’s academic director, said he remembers Kamalanathan and confirmed that he did an external course in communications, majoring in public relations, with Edith Cowan University (ECU), Australia.’ – Malaysia Insider Ok, now Olympia’s academic director has stepped forward to clarify things – but I still have my doubts because he said that ‘there is no actual student record’ and he is basing his confirmation on memory recollection? And are companies not supposed to keep all records for 7 years (audit purposes)? In a field audit conducted by… Read more »

LOOK AT THE DATES – The certificate states he was awarded a Bachelor of Communications from the University on 23 January 2004.

But the Graduate Verification Service states that the degree was conferred on 25/11/2003.

And isn’t it odd for someone to have ‘P.KAMALANATHAN/P.PANCHANATHAN’ as a family name????

Anil, The EC has changed the polling stations of more than 14000 people in Hulu Selangor without informing them. The Pakatan people have painstakingly printed out the invidual names and their changed polling station to go to individual houses to inform them. Imagine their surprise when they found that the addresses were also mixed up so that the people cannot be informed. However they managed to go a certain house and the owner of the house told them that she had already been informed by phone regarding the change; definitely not by the Pakatan people. Please Anil and readers, try… Read more »

Sadly, he is a hand kissing…

And one Orang Asli village defied that ban, and you know what the authority does?

They sent in the cops !!

They set up 16 “pondok polis” in the 16 Kampung Orang Asli – one pondok for each Orang Asli village.

Do you have the link to that report where they sent in the cops?

There was no report when they sent in the cops. My friend was there with his PR team, tho. But they are not reporters.

Why not ask Kamalanathan to post a picture of himself at his graduation and of course receiving the scroll.
In any case, the truth will come out soon.

Oops Anil..
Sorry after reading your article, could be the lP is actualy /P. My mistake – dont have CSI-gene in me 🙁

Dear Anil,
I laughed so loud and hard till the rest of staff looked at me.

Look at the Kamalanathanlp – both the ‘l’ prints are not the same. How can this happen? Oh my gosh..

I wanna do the song ‘ How Low Can You Go ‘
Hahahaahah

Here’s a link that’ll save some typing (or some copy and paste, anyway):

Can’t get closer than that, sorry – the page (wrongly) uses POST for the form data, so there’s no link that will get the result, you still have to click the button.

Maybe we should solve another mystery this way!

Old news. Latest news is Mahathir breaking his promise and showing up to campaign in Hulu Selangor. Its clear BN in trouble and need go even further back in time for old tricks to win…

Mahathir in Hulu Selangor? That should be fun!
It didn’t really help when he stepped forward in Bukit Gantang to take on Nizar.

Not this time, Anil. All the BN bigshots are there, or on the way. It’s a celebration for them. From the get go PR has blundered. They put too much effort trying to woo the Indians in the estates and forgot about the Malays in the kampung. Nobody’s blocking PR in the Malay kampung but the estates are not permitting the PR volunteers from entering. And still PR tried so hard to enter the estates, and negate the importance of the Malay votes. Plus PR talked about the WRONG ISSUES there. They tried telling the Malay folks in Felda how… Read more »

check out this site and compare the cert yrself … see any difference? http://www.nachtschimmen.eu/_images/refs/GradDipLang.jpg

Yeah its real but its also tainted – sounded like a crappy course that did not sell in the first place.

But Muhiyiddin again put his foot in his mouth by saying ‘It can’t be fake. You can’t expect him to show his degree’.. He was not so sure meaning he knows there is a lot of people in BN with lots of fake qualification..’?