If we think this week of uncertainty over the choice of PM and government is too much, spare a thought for Belgium, which last year had to go through 500 days of horse trading before settling on a seven-party coalition government.

In a sense, Belgium, like Malaysia, is also caught up with identity politics and regional economic disparities.

Much attention here is now focused on Sabah and Sarawak, especially GPS.

Anwar Ibrahim is the front-runner and popular choice in most rudimentary polls. The other prospect is Ismail Sabri. Tengku Razaleigh Hamzah and Shafie Apdal are the dark horses.

Much will also depend on the Pejuang, Warisan MPs and Zahid’s Umno 15. If most of them throw their backing behind Anwar then he could be the next PM. If not… then it will be Sabri.

The problem is few want the ‘court cluster’ in government. So we will have to watch out for that one.

It is also not clear what any new government would do with a string of ecologically damaging mega-projects in the country: think of the three-island project in Penang and other mega-reclamation plans, controversial mega-dams, an unpopular highway in the Klang Valley ….

We cannot count on the politicians to proceed on a more sustainable path and undertake many of the institutional and other reforms we need. That is why we must remain ever-vigilant.

Will they even undo the damage done by privatisation and neoliberalism, including the critical underfunding of public healthcare for decades?

Which of the coalitions can best manage the pandemic while caring for the vulnerable and without trampling on the people’s basic rights (the right to earn a living, the right to peacefully protest, the right not to be discriminated against, etc)?

The Perikatan Nasional reign was disastrous in more ways than one. We wait and see what the next few days has in store.

Penang is under Pakatan Harapan state government and the numbers have been gradually rising for sometime now. Who should we blame for this cock-up ?

PN buys all the vaccine using certain funds reserved for the future. Why under BN, we are pokkai? The vaccines are limited and some are donated as under we under BN are like those in Basok.Land. Cases in KL and Putra are spreading like wild fire. Of course KL and Putra under BN received more vaccines and medical staff and get them protected first.

Albert Einstein’s famous line: “Insanity is doing the same thing over and over again and expecting different results.”

Since FMCO (3 months ago), our DG has repeatedly said the peak would happen in 2 weeks, but we have witnessed new peaks repeatedly instead.

Senior citizen like Waiyat should consider inactive Sinovac, not mRNA vaccines like Pfizer-Biontec (do not confuse with Pfizer-Viagra) or AstraZaneca, for lesser risks like blood clotting.

lucky to get vaccine. but in hospitals, limited oxygen, older has no chance

PM SELECTION :-  ———————– All these so called professors, analyst, economist etc, etc, etc, are coming out with so many proposals , suggestion for this, for that, for that, for this, thinking some grand poobah is now going to take over and govern the nation.  But look boys, its the same old uncles from the same old baby pool who is going to be selected. There are, no other pools or new pools to select from. THERE NEVER WAS. And all this so called experts in their field are so naive, intellectually blind even. So, Good old Grandma’s homemade apple pie on all their… Read more »

SingLand has former Penangites as politicians and badminton Olympian.

Quote – Cases jumped due to RTK-Antigen tests, says health deputy DG (Penang) She said the record high numbers were also caused by the adoption of RTK-Antigen tests (where test results are immediate) since last week for a quick turnaround after the positivity rate shot above 10%. Unquote https://www.freemalaysiatoday.com/category/nation/2021/08/18/penang-seeks-donations-for-new-centre-as-severe-covid-19-cases-hit-40/ The same reason ( testing ) was also given by the Health D-G for the rise in covid-19 cases but the PH opposition continually demonized the former PM and PN government as if they were the Covid-19 virus infecting the people.    So far, have given the reason for the rise in… Read more »

why want to be the gomen of the day? tax, mata2 etc and all other resources under wyatt. you are the godfather. if many rakyat get sick, you still want to ask uncle lim? uncle lim, anwar not godfather or boss. or you want to bully small potato?

What happened, why the sudden surge in covid cases in Penang, overtaken bigger states like Kedah and Johor. Why the quietness of Komtar 28th floor ? 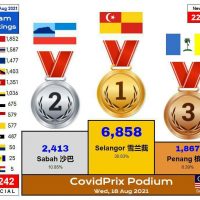 Penang now in Phase 2 recovery can dine-in in restaurant – no mask open mouth wide to savour Penang food more opportunities for Covid delta strain to enter the lung as well.

Why DG and health Minister more quiet? That is their department to monitor ther Covid. How Komtar monitor Covid? Use hand and feel the forehead for rise in temperature? Is this orso what health department do?

Istana Negara has yet to announce who is to be the country’s next prime minister but it seems the jostling for the number two post has already begun among the Bersatu trio.

DSAI will soon be counting the cost of not accepting PM8’s offer of 7 reforms and senior minister position?

Tony Pua will have the last laugh?
GPS prefer to remain as Umno’s minion?

Umno+Bersatu+PAS = Barisan Muafakat?
How will MCA and MIC fit in?

Dominic will extend carry….logy to Ismail for Gelakan to sneak in?

Will Wyatt care to answer?

DSAI is not destined to be PM?
His liberal and multi-ethnic approach does not sit well with the majority in the nation?
Can the opposition still have the patience with him on the road to GE15?
ALIRAN must ne writing on this matter now.

50% discount, not at Lazada or Shopee.

Lelong at Johor Baru can spook the prices of overhang homes in Penang? Domino effect can happen. Penanglang time to check out your Ideal homes?

Pengland kias strike empat ekor. Chip chip housing. But with people looking for food in komtar, many can afford to buy lelong?

You buy underground empat ekor?
Magnum and Toto now where got open?

No sure how this will impact projects like Forest City targeting foreign buyers.

Dominic to apply Gelakan back to BN.

Dominic should be more visible jn Penang should he want to recapture Penang otherwise he could ne overtaken by Ah Keong?