This was the scene at Dewan Panorama in Taman Tun Dr Awang, Butterworth this morning, when RM500 each was given to the first batch of successful low-income applicants in the area. 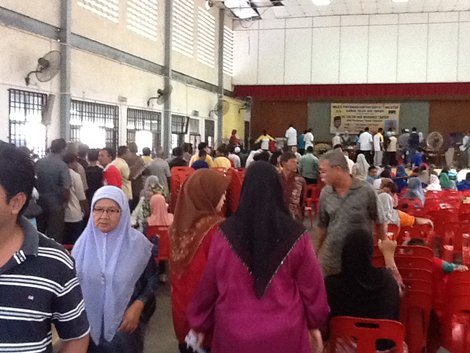 Residents who had applied for the aid and received letters of approval via post from the government turned up at the venue. Young and old, they came, a few in wheelchairs. Outside the hall, they registered at counters and were given a voucher each. Clutching these vouchers, they queued up inside the hall as the line of people inched to the stage to redeem their vouchers for RM500 in cash.

On stage, a large banner on the backdrop proclaimed that this particular event was facilitated by (“disempurnakan oleh”) Nor Mohamad Yakcop, the MP for Tasik Gelugor, who happens to be the Minister in the PM’s Department in charge of the Economic Planning Unit. Also on stage were folks attired with BSN tags while a couple of others wore white shirts on which was printed ‘Pemuda Umno’. An Information Ministry van was parked outside.

The announcer told the crowd that if they didn’t want to wait, they could also obtain the RM500 cash from banks such as BSN and CIMB.

Today, I saw quite a long queue at Maybank Farlim eagerly getting their RM500 ‘ang pows’. Many Ah Peks and Ah Chim were shining bright in their faces brigthening up the bank interior, more brighter than the usually hot sun of January. And it rained cats and dogs signifying ‘Shui’ (Money) for the timely collection. To all of them, spend prudently on the families and vote wisely for a better future and Rakyat’s prosperity (for all) of Malaysia! If only I am eligible for the timely RM500, I will spend more Kopi-O kau kau topped up with Penang’s famed street… Read more »

Thanks for the thought, tunglang! 🙂

Courtesy of the most fiscally irresponsible PM
our country has ever had.

Over in S’wak, the RM500 scheme is apparently hitting a big bump. Folks from the areas far from towns are complaining that they will have to spend more than RM500 to get that RM500.

The ill-planned RM500 financial assistance for the poor in Sarawak is incurring the wrath of poor rural folks who had to spend more to get the aid money.

So kind of them. But what about the rising prices of big-ticket expenes, big purchases including houses (RM 10,000 to 50,000 a year) and cars (monopoly), deliberate destruction of public transport (the exact method including incompetence does not matter)? Remember, there has been no significant rise in the salaries in the private sector for decades, and this is made worse by the regular increments in the civil service.

They used our money to distribute to people… have they asked for permission first??!!! What makes us the taxpayers even more angry is that they said those RM500 are courtesy of BN and not us the taxpayers. And to make the situation even worst, aren’t the budget is deficit now??!! If they really think about the people, don’t just get barang naik! Sugar price has rose several times since Robert Kuok was forced to sell his sugar business to the roti canai boy from alor setar. Everything goes up.. yet they say inflation is still under control without any harm.… Read more »

What those idiots don`t realize is that they have to still buy the raw sugar from, Robert Kuok

Yang, i thought Robert Kuok’s sugar refinery has been sold to Umnoputra !!!

Kee,
The takeover of the sugar mill (allegedly) earned the UMNOPUTRA cronies 10 billions but the counctry lost 200 billion. Right after Robert Kuok left Malaysia, he immediately announced the acquisition of Australia’s biggest sugar factory. This is the world supplier of raw material for sugar manufacturing. Of course, this includes supplying to the … Sugar factory in Perlis.

At the rate that the deceitful and corrupted Umnoputras are dishing out money from the nation’s coffer each time before an election there is no faster way to avoid going into bankruptcy faster than predicted ! Here again, the deceitful Umnoputras, their only solution to all the woes the country is facing or better still the morons are able to find a solution is to give away, not own their money, but that belongs to the country, money. Can money really be the solution to every problem ? Just like the numerous cash incentives they are now offering to the… Read more »

Malaysia may not be bankrupt but the Raykat will soon start to cry. Thats when GST and various taxes would be implemented to cover for any shortfall when the Corrupted UMNO & BN form the govt again. Don`t say you have not been warned when price of essential good start to increase drastically. Its good to take the money to celebrate the new year but then vote Pakatan Rakyat.

Anil, Yes indeed…Our Taxpayer’s blood, sweat and tears… Politics is ugly. Never doubt what small men will do for great power… Democracy is the state of affairs in which you consent to having your pocket picked, and elect the best man to do it. Wealth without work, Pleasure without conscience, Knowledge without character, Commerce without morality, Science without humanity, Worship without sacrifice, Politics without principles… In Bolehland, Jibby & his ilks will promise to build bridges even when there are no rivers…! Finally, to share this… “In a written reply to Chong today, the Finance Ministry, which is under Prime… Read more »

News say , there is 3 millions “benefactor” .
Hmmm, a 28 millions population country, after so many year of “satu lagi project bn”, there is still 3/28 = 10.7% of population eligible !? If this is not … up , I really can’t find other thesis better than this to describe government dysfunctional.

By the way, among 28 millions population, at least 20% are not working class(e.g. children, student,retired person) . So the “benefactor” level are much worst than we imagine. In addition, there is no audit about “double payment” or payment to “phantom”.

It is your money folks, bukan wang UMNO/sycophants! They are just managing the country’s wealth, infact, they are badly mismanaging it, they do not have the money to give it to you folks, they have to resort to borrowings to follow what Pakatan Rakyat State Government in Penang is giving. Penang is giving 100 per year, thinking of making it a twice a year affair in Penang. UMNO/sycophants are giving RM500, once off, perhaps once in five years. That means 100 per year. Serupa saja, thank you Pakatan Rakyat, without you, the Rakyat will never have the chance to gain… Read more »

I think the monies distributed by the State govt. in Penang was attributed to/because of a surplus budget – unlike habitual monumental deficit run-up by UMNO/BN admins. Case in point – Perak – where a surplus under the auspice of Pakatan Rakyat, had its state coffers turned upside down to record a deficit of some RM$200 mil while under the care of a state admin that was hijacked but sanctioned by the Istana. Also, as correctly stated by ASobri, sums distributed in Penang was to aid retirees and not the “free-for-all” that we currently see – I think that distinction… Read more »

Andrew I
Reply to  Ahmad Sobri

Ahmad Sobri: “…thank you Pakatan Rakyat, without you, the Rakyat will never have the chance to gain some form of assistance during difficult times. from an uncaring Federal Government.”

Gherkin K: “aiyah, why you let the cat out of the bag ah??? Now we have to pretend to change and some more we have to pay. Also so hard to cari makan nowadays. Must answer for this and that. This Anwar is a real pain in the…lah, pun intended.”

Sorry, just filling in for Gherkin. I think he’s off somewhere sulking because of my last comment.

Penang gave money to the deserving (who qualified) even though the Federals had not paid Penang its allocation.

Ahmad Sobri, you need to talk to the kampong folk, explain to them as they are easily deceived just like my mom said to me that BN give me RM500, so i need to vote for BN.

Of course, i quickly corrected her that that was the people’s money, our own hard earned money, and i said to her go and tell your friends.

The money is paid out of Bank Negara from Taxpayer funds.
It is Wang Rakyat, not Wang Barisan Nasional…

Its way, way overpoliticised to look like the receipient should be thankful to Barisan Nasional. Leaves a bad taste in the mouth….

I found it interesting that quite a number of Penangites I talked to of a wide range of backgrounds understand that…but how will it turn out in the kampungs and other communities which only rely on MSM news ?