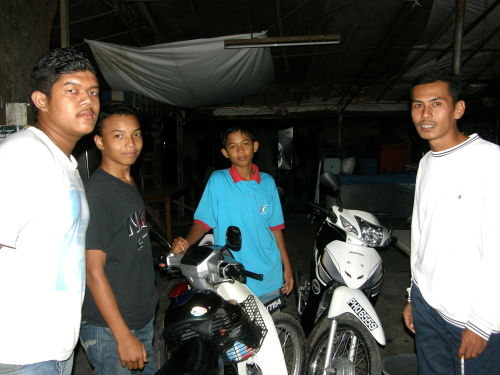 As some of you have pointed out, there is a discrepancy between the Election Commission’s figure for the voter turnout of 65 per cent turnout and the actual turnout, which was 81 per cent. This discrepancy created a lot of confusion.

My math whizz friend comments, “It looks like the Election Commission can only count correctly when the BN wins.”

He further analysed the results and came up with the following conclusions:

One final point, 33 per cent of you were correct in your prediction (in the poll on this blog) that Anwar would secure a 15,001-20,000 majority. So were those who predicted a high turnout.

Our citizen journalists were also spot on in predicting a landslide victory for PKR/Anwar. Speaking of which, I will let Karma have the final say:

A jubilant mood all over Permatang Pauh.

Yes, with all the machinery BN had – the TV, the newsprint, the money, the swearing, prominent spokesmen including top government officials to counter Anwar – they still lost. The people want a change. BN’s 51 years at the helm, they feel is enough. People are now united as Malaysians. They are no more talking about racial matters. It’s the oneness they want now…

P.S. from a car load of nice guys I happened to bump into in Permatang Pauh today:

Remember us!…the car that shout ‘blogger unite’ at you (1.00 to 2.00pm…in Permatang Pauh town)… about the winning statistic 70 per cent for PKR and 30 per cent to BN

Then my brother replied, “Now it’s 80 per cent to 20 per cent” (after checking his crystal ball).

We are from Kepala Batas. And the rest of us like to thank you and all the bloggers for coming to P44 and making our dreams come true. Zillion thanks!

BN Partyman, Be a gentleman and just shake hands with a “Thank you, it was a good fight”. I hope you do not take after Barisan N katak dibawah tempurung mentality and blame “lost cyber war” “we expected to lose PP anyway that’s why we send the entire UMNO machine to PP” or “it’s a working day” for BN’s loss. And you better get used to the majority votes and majority voice from now on, since this is a democratic country, where the majority speaks, not N speaks. Read my lips (fingers): We are sick of the sodomy lies, the… Read more »

what did the EC say?

btw, you guys have done a marvelous job. well done.

Thank you for your coverage & updates during the election. I was eagerly waiting for each update from you guys!

Dear Anil, Thank you for your live coverage of PP by-election. We Malaysians of all races are hand in hand to support DSAI and his reform agenda. We hope that PR will soon take over the goverment by Sept 16 to manage this country we love. For the people of Permatang Pauh, representing the rest of the 27 million humble Malaysian citizens we would like to thank you and salute you for making the right choice. It was not that you have made Anwar to win but you have made all Malaysians to win… A BIG THANK YOU!. And for… Read more »

Dear Anil,
I think you guys the blogger deserve a Nobel Prize awards for your writing. Well done.

UMNO leaders are a laughable lot …. they blame this squarely on our current PM that they lost because of Malaysian hate our current PM.

These people just don’t get it. We hate the damn ******* UMNO/BN parties and everyone in it especially those holding positions plus all the …. corrupt cronies irregadrless of race.

Sulk or blame all you one. Whether it is Sept 16 or next general election, UMNO/BN will NOT BE THE NEXT GOVERNMENT IN THIS COUNTRY

Need the support of all Barisan Rakyat supporters!

What is Meredeka? It was merely a holiday for me. It was the same for most of us born after Meredeka. The spirit of Meredeka was never with us. It takes a simply by-election of Permatang Pauh, to gives us a true new meaning of Meredeka. We have been given hope and looking forward for a new horizon which is coming soon. It will be a fantastic feeling looking forward for this coming 31st August and thereafter. Thanks to you Datuk Seri, you have given us hope to look forward for a NEW Malaysia. Team Pakatan, keep up your good… Read more »

Hi Anil I was concern about the voters turn out Vs the total casted votes The whole night in Astro Awani they saying 65% turnout and I was using my calculator and see something is wrong with the figure. My concern is from where the figure 65% came? When people go in to vote their names are check, read & striked from the list so the total striked names should be the total turn out. So the Striked names & Total voted ballot count end of the day should be tally. There could have been 65% turn out but 80%… Read more »

Dear Anil, Your biased live coverage of the PP buy-election was disgusting to say the least. It seemed like the Barisan Nasional was non-existent in PP. The fact that more than 15,000 people voted for Arif Shah is testimony to BN’s popularity. If it were not for the rough house tactics of the PKR goons, more legitimate voters would have made it to the polling stations. You and your ilk ought to be detained under the ISA and the keys thrown away. You are partisan, unfair, biased, and a false witness to the events in PP. Like the 31,000 odd… Read more »

Thank you (and all the other bloggers and the poll watchers too) for all your hard work in keeping us informed.

Lyrics from the song are as follows:

The bars could not hold me/Force could not control me
They try to keep I down/But Jah put I around
Yes, I’ve been accused/Wrongly abused now
But through the power of the Most High/They got to turn me loose now

You did the Malaysian bloggers proud with your reporting and unpdating of results.

Thank you very much.

increased majority of 2283 votes. that is substantial. however, to najib this is what he said : “”There was not much difference in the number of votes garnered by Anwar when compared with that won by his wife (Datuk Seri Dr Wan Azizah Wan Ismail) in March.” as reported here :
http://www.nst.com.my/Current_News/NST/Wednesday/Frontpage/2333409/Article/index_html
well, to najib (who earns a lot), 2283 is definitely nothing.

The decision of the citizens of PP is an unequivocal statement that the Malaysian people has had enough of the UMNO/BN government.It just reinforce the last GE that it is time for a CHANGE of the type of government that has ruled this nation for the past half century.It is an indication that the people are not satisfied with the “little” that the ruling government has brought to this nation, when it should have been much much more than what the nation is at this point of independent nationhood. After 5 months of the March GE, every indication from the… Read more »

Great job and thanks to you and your team. It was an awesome coverage. I like the pictures. God bless!

Great job. I followed your updates all the way from Austin, Texas!

Dear Anil, Like the nice guys in the car said – a zillion thanks to you for your “live” coverage from ground zero. When the political drama in Malaysia has been played out, when Anwar finally becomes PM, when the rogues running this country are on the run, when a semblance of democracy and our defiled democratic institutions are restored and when the dust finally settles, you will be one of many people Malaysians will need to heartily thank for your tireless efforts and priceless contributions in shaping the politics of this nation for a better future for us all.… Read more »

Please read my blog http://www.penangfengshui.blogspot.com on what I wrote about the luck of BN and PR from the view of feng shui.

hi there anyone knows how to get into malaysia today and malaysia insider news website …. looks like they block it again.

Thanks for the continues update of this mammoth by-election, to my opinion will be a turning point in Malaysian history and the lives of the people. As I live in Singapore (Malaysian of course), all official media have been quiet and I was not getting any news. You blog was the main source for us in the office consistently in getting an update.

Again thank you and the people of PP. A change is needed, a change is a must.

Maybe the EC counted correctly. Ghosts can’t be counted as far as I know…

Very Many Many Thanks, Man!

At 4pm the EC announced 64% voter turnout. So how did the turnout reach 80% in the last hour with all the traffic jams, road blocks and difficulty of voters to get to the polling centre? In the 2008 G.E., the voter turnout was 81%. With the by-election held on a working day coupled with rainy weather and many voters outstation, the high voter turnout in this by-election is extraordinary and rivals ideal conditions in the G.E. Either it shows the extraordinary determination of the PP voters to vote for change or there is some suspicious activity here to reduce… Read more »

Please remind Anwar to pay a visit to YB Gobalakrishnan and his sons.
They have sacrificed alot for us.