For the peninsula, his tally of parliamentary seats shows:

Notice the survey predicts that Pas could be wiped out. 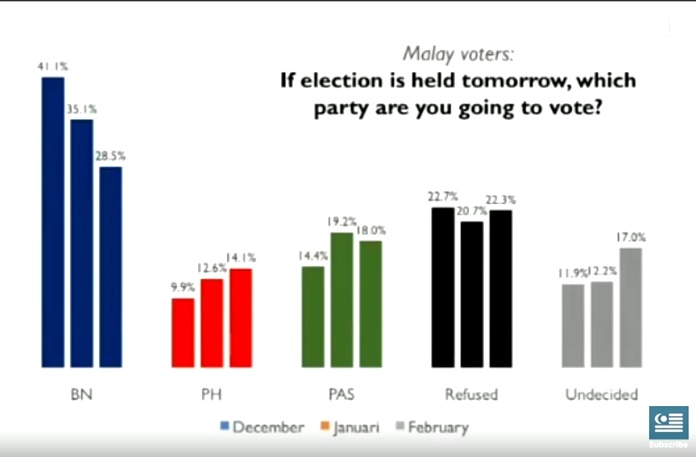 An independent economist who was present said this was the best statistical study on the elections he had seen so far.

Check out the video and share with us what you think.

In marginal seats, every vote counts.
That is why Umno is working covertly with PAS to defeat Pakatan.
So do not waste your vote on mosquito parties.

Yet PSM is trying to dilute the votes of Pakatan Harapan by engaging in multi-cornered fights. Sigh!

Mahathir said MIC mismanaged allocations to Indians besides not raising the problems which needed to be addressed.

Pakatan Harapan’s latest strategic partner, which is the Minority Rights Action Party or Mira said they will not contest in the coming polls, unless they were invited to do so.

Its president A Rajaretinam, said as a newcomer, they should respect what has been decided by Pakatan.
He said this during a press conference at its headquarters on Wednesday.

Polls commissioned by Putrajaya show BN has at least 145 seats in the bag and that only a little push was needed to win a super-majority government.

Independent researchers say BN can win as many as 155 seats, especially in view of the Election Commission’s redelineation – an exercise that many believe favours the ruling government.

Better for PH to take low key approach because most Malays will ultimately vote for Umno-BN for fear of losing the Ketuanan status.

So Indian voters must back Harapan.

Do not expect even a ripple from the Indians.

This line-up will tell you, if and ever, should BN win back the state of Penang, big brother will be calling all the shots and Teng Chang Yeow will again be a CM without power just like in the good old days when Koh Tsu Koon was CM.

We must deny BN since mo1 is stealing GE14 via gerrymandering daylight robbery. Zunar is right, EC is the new component party of BN.

Last night 9pm live on TV1 and TV3, PM Najib said he was not implicated by the Public Accounts Committee’s investigation on 1MDB.

“I urge everyone to read their report. We need to ask ourselves some key questions: Firstly, did any paragraph claim that I stole 1MDB funds? Absolutely not.

“Secondly, did the report state I committed a crime? Did I do any wrong? The answer is no.

“Finally, in the report, did it say the donation from the Saudi government was from 1MDB? Absolutely not,” he said.

The survey shows Indians are going back to support BN. Possibly the goodies from MO1, or they simply do not want to forgo BR1M. What do you think Mr Anil?

Pakatan do not count in Indian votes as most of the Indians are easily satisfied by BN instant goodies for immediate gain and sacrifice long term future. Let PSM fight BNnfor Indian votes.

Are you that Gerakan Yang making a comeback?

It’s interesting why Negeri Sembilan and Malacca are coloured black. Majority of respondents refused to give an answer?

I wonder why and what will be the outcome of this.

I think there could be a tie in those two states.

Invoke survey has a flaw. All the polls have very significant number of non-respond and refuse to respond. They do not count to the undecided. The error in the survey result COULD be bigger and therefore too close call is actually meaningless.

BUT general big theme should be valid, namely Hadi’s PAS would be wiped out. BUT PAS at 18% of Malay support means PAS role as spoiler certain. Anything in the double digit, PAS window to ransom UMNO is opened. RUU355, Hudud and theocracy is ever more likely.

Rafizi said they probed with further questions from those who refused or declined too respond and made certain assumptions from their answers to those questions. But yes, Pas will end up being the spoiler – and, they hope, kingmaker.

BUT is anyone in Sabah and Sarawak talking about this? It is SHOCKING that when Anifah says he will resign if Sabah state rights is not returned and the opposition did not dare him to commit Hara Kiri if RUU 355 is passed.

East Malaysians will still provide FD to MO1. They worship their Bung leader.

How can there be any progress and escape from dissolution when
– our elected and other paid servants decide what, how and how much we can criticise?
– there is no widespread education and urgency on climate change, destruction, poisoning, waste, fraud and plunder?

News that I find to be in the Twighlight Zone category of wierdness:
– MACC trying to “inculcate anti-corruption” in primary school pupils – Star 28/2
– In CPTPP which replaces TPP, the govt. has agreed to join UPOV, “Union for the Protection if New Varieties of Plants”. Somehow, this prohibits all farmers from saving seeds to replant. They must buy the seeds – Star 26/2.
–

I have not watched the whole video but firstly above infographic of Malay voting intentions does not include the Bumiputras of Sabah and Sarawak – BN’s fixed deposit states.

Secondly, according to the February 2018 figures, after BN, more Malays would vote PAS than Pakatan and in a three-cornered fight, this would allow BN to win seats with the largest minority of votes in Malay-majority constituencies.

Zairil, who was the speaker at recent Anil’s hosted event at Black Kettle, confirmed marrying Dyana, to become power couple of DAP to pull in more young voters towards PH???

The event was actually organised by Penang Forum and the Chevening talks series. I was the moderator.

You must be surely joking right? Zairil and Dyana allegedly had an illegitimate affair for months before finally Zairil divorcing his 2nd wife and taking Dyana as the 3rd wife. Hardly a moral role model for the young generation.

Calvin must be blue saga seed joker better then jais ir jAkim? Now, they enjaged nit married. Bn best for hitting bdlow ths belt. Jais and jakin is like aca. Aca caught holiday in bali and calvin deep silent. Your (leader) mentioned in world journals as ali baba but remain quiet. But local drop a ballon and yet sue the accused without letup. Good in bully she woman.

Be careful he may overturn tables at coffee shop…

Whatever the merit of this Invoke survey, it is hard to assign any credibility to it as it was done by an organization funded by a political party. There are many independent surveys with better methodology and credibility. I find it hard to believe that PAS will be wiped out. It is more like PKR and Amanah who are in the danger of implosion.

What is so hard to believe pas will not wipe out? Your paymaster will stop yr payment as they want to win kelantan. Most of the seats involved with yr paymaster.

No Umno leader had been able to answer the two questions which had been posed by the national laureate Pak Samad to expose Umno’s political lie:

1. How are Malays under threat? How can Islam and Malays be threatened when those in power have been Malay for over five decades?

2. What have Malay leaders been doing for five decades if Malays can be under threat?

Invoke data survey creates kia-su knee jerk reactions from both sides of political divide.
To understand kia-su from the original source, read here:
In practical terms, ‘kiasu’ means that Singaporeans love a bargain and hate missing out. But where did this deep-rooted belief come from?
http://www.bbc.com/travel/story/20180311-the-most-ambitious-country-in-the-world

The positive aspect of being kiasu is that it drives for the best, which many Malaysians are lacking being over complacent and too dependent on hangouts like dedak.

Being kiasu to strive for improvement is better than the ‘tidak apa’, ‘syiok sendiri’, ‘belakang kira’, ‘rileklah brother/santai’ or ‘buat bodoh’ attitude in Bolehland, despite 22% of Bolehlanders are depending on BR1M handouts, while taking slow TN50 ride (moonlighting as Uber drivers and nasi lemak sellers) to that elusive high income dream.

I rather be kiasu like Singaporeans so long as I have their Hugh purchasing power that can buy things easily even if they are 70% more expensive than in Malaysia. SingDollar anytime for me!

Typical Knee-Jerk … reaction!
Pity you for your kia-su extremity!

zoro > shriek > Zolo?
Now, I understand how desperate are personality attacks of some.
Pls try harder to make it believable, otherwise you are another form of desperate spinner.