Has Tengku Razaleigh been put in a spot? The BN MP or Umno division head for the area would ordinarily be expected to play a pivotal role in his party’s campaign. 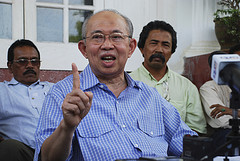 The Kelantan state assembly seat of Galas falls smack within his Gua Musang parliamentary constituency. But Ku Li is no ordinary MP.  He has been one of Umno’s most vocal internal critics.

His relatively more progressive and inclusive statements of late stand in sharp contrast to the ethno-nationalist rhetoric of the Umno mainstream. And this has often put him at the fringes of the party since his return to Umno.

This by-election could put him in an awkward position. Muhyiddin has already expressed hope that Ku Li will help to ensure an Umno win.

Lying with Galas is a logging township with kampungs, Orang Asli settlements and Felda schemes. From a national perspective, the latter two communities have expressed concern over native customary right lands and the way Felda is being run respectively.

Umno surrounded by the spectre of Perkasa’s chauvinist rhetoric will also be fighting an uphill battle in this constituency, which has a sizeable presence of minorities. Not only Ku Li, but also MCA and Gerakan would be in an uncomfortable position.

Time to put your cards on the table, Ku Li, and make a stand for what you really believe in.

Was in Galas the other day. Support for Pas was just fantastic. Looks like the seat will go to Pas again. Squabbles in UMNO camp here will make Pas sail through. Out of 10 people talked to, 8 gave their thumbs up to Pas. A good sign for Pas. Tuan Guru Aziz was there and he mesmerised the huge crowd. This man is well-liked by almost everybody – Malays, Chinese, Indians, Aslis and Others.

UMNO did not want him they did not want to nominate him as UMNO president. Now when the chip are down and they need him badly to save that Najib image. Well UMNO we know what sort of party you are. Now DPM is pushing very hard for Ku Li to take the lead and also the blame should UMNO is defeated. He will claim that it was his
idea should UMNO win. Ku Li either way you are a loser the champion will be the … DPM..

Muhyiddin is using Galas to push Ku Li to declare his undivided loyalty to UMNO (and thus to his leadership) despite all the rot.

Anyway, the deputy president knows very well that if Ku Li remains neutral, BN would lose this seat by a large margin.

KuLi is not UMNO but Semangat46 ( previous UMNO which is nulified by M… ) . Current UMNO is …

Ku Li is a smart guy, one leg on UMNO and the other on PAS. He can twist and turn. He gets the best of both worlds.

In other words, he (lacks) principal.

“He lacks *principle*”
I lack principal: I’m skint. I expect Ku Li has plenty of principal.

Thanks Sean for the correction.

I must be influenced by our 2 racists principals whose btn principles are upheld and supported by Umno.

If Ku Li put his money where his mouth is, we must salute him as a noble son of Kelantan…immaterial whether he is in UMNO or PAS. Let’s watch if he will put the interest of his State before self!

A tiger will not change its stripes.

Time for his excellency Tengku Li to put his foot down.
In his last few public speeches he has aligned himself more with the political views of PR then he has with UMNO. Tengku Li is a gentleman and a scholar and we at Pakatan Rakyat believe that Tengku Li will do the right thing by Pakatan Rakyat and all Malaysians.

Once Ku Li jumps to PAS everything is clear-cut.

Although, it was a sad event of the premature passing of the Adun in Galas…perhaps, Allah is play a fast one on the UMNO-BN goons! hahaha! “Truth will prevail”… As for Ku Li let’s see his true color. Obviously, the beggar parties in the coalition as usual, will just be sniffing around aimlessly and unproductively. We shall see the Bugis language of “You help me and I help you” from the UMNO PM worth much in Galas.