Say bye-bye to the 1Malaysia free beers. Now we can expect Ubah! or GST. 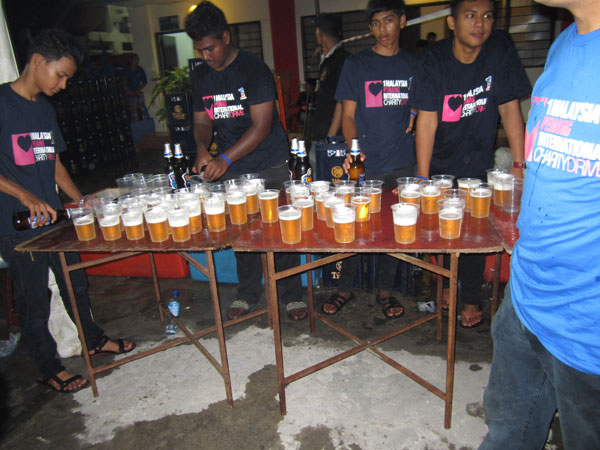 This is the sort of scene at the 1Malaysia free dinners all over Penang.

Earlier, one of the 1Malaysia free dinners had served a Vietnamese beer brand ‘3 Amigos, but this blog pointed out that it was a San Miguel beer. And you know who is linked to San Miguel, right? That was the last we saw of that beer. Since then it’s been stuff like Tiger beer and Carlsberg.

But another journalist said he drank some Cambodian beer at another free dinner – but couldn’t remember the name of the beer. The journalist also saw migrant workers happily lugging away more cans of beer home while locals ta pau’ed quite a fair bit of food. There was almost a fight and a scramble for ice-cream at a free dinner near Komtar!

I thought we had enough clowns in Malaysian politics, but here’s one roaming around at a 1Malaysia free dinner recently. 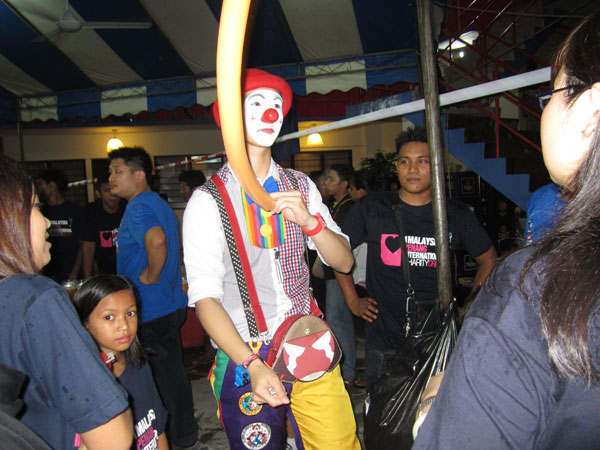 Lets all come out in full force and vote.
Lets hope for the best.
Meanwhile curse Goh Choon Lye … and others vote buyer

This is BeeEnd way top corrupt/poison the minds of Penang Chinese & Indians – to be dependent on freebies, soft loans, promises & vouchers. What comes next is unimaginable by all standards of dignity & decency.
No thanks to Kutty’s legacy HQed in Helang Island.
Is this the drunkard way forward to 2020 as a 1st world nation?

THINK CAREFULLY, VOTE RESPONSIBLY for a clear (not drunkard blur) future as well as for your children’s destiny.
UBAH now or never.
Btw, Crouching Tiger, Hidden Dragon, Drunkard Voters marketing (from Ipoh) has no place in the hearts & minds of Penangites!

Must be one of Gherk’s relatives.

Where is our court jester, Anil? I really miss his predictions and verbal diarrhoea.

If BN retakes Penang, these ‘free dinners’ will be the beginning of your worst nightmare !!!!