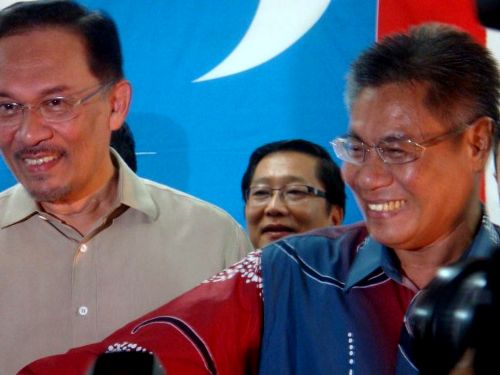 2213: The worst kept secret is officially revealed: Mansor Othman has been chosen as the PKR candidate for the Penanti by-election on 31 May.

2207: The candidate is expected to be announced anytime now.

2144: Manikumar, the victorious PKR candidate in the Bukit Selambau by-election, has just walked in.

2136: Former Penang Deputy Chief Minister Mohammad Fairus Khairuddin has made a surprise appearance with Anwar at a ceramah in Penanti that is now in progress, says my contact at the scene.

He says he has been through hell and back and now knows who his friends are.  He pledges his allegiance to Pakatan before the 1,000-strong crowd at the Yayasan Aman and vows to make a comeback.

PKR’s Zahrain says there are no major differences in the Penang Pakatan.

It is an open secret that Mansor Othman is going to be the Pakatan candidate for Penanti. He is looking dapper in a smart maroon-and-grey batik shirt.

Good luck to Dr Mansor. Yet to know who is UMNO’s candidate. Anyway, Penang needs a capable DCM to see it through the present economic glooms. Dr Mansor is the right man to work with Dr Ramasamy and Mr Lim – a great combination. Good news that ‘hardcore’ poor does not exist anymore in Penang. It took less than a year for the new governmnet to handle this problem. We need more leaders like Lim Eng Guan at the helm. He is a selfless man who works for the people.

Penanti is already in PR’s pocket. It’s quite difficult for BN to get a candidate to match the calibre of Mansor. By the way, over 90 percent of Perakians cannot accept Zambry as their MB. They are adamant that Nizar is their choice. The people want a fresh election to decide once and for all who rules Perak. The best option for BN now is to dissolve the asembly and call for a fresh election. This is ultimate democracy.

Why wasn’t Mansor Othman selected to stand for PKR in GE-12? Can anyone care to enlighten me on this?

Yes, an educated man indeed. He is the right person to be DCM of Penang. PKR has its candidate. See who BN will pick.

3 master degree plus 1 phd holder.
sigh…… what a great man.

So good to see a smiling and honest looking untainted MP to be! Mansor Othman congratulations for being chosen, Anuar it appears has hit upon the right choice…your face spells honesty and that is what the Ra’ayat want. To hell with BN and its falsehood, it has left behind a lasting bad taste, for which we need a cure. May we rely uon you to win in Penanti in view of the big take over by Pakatan which is everyone’s wish. Do please, the people of Malaysia will provide you with the necessary steam, you just ride to battle and… Read more »

Some pictures from this event.