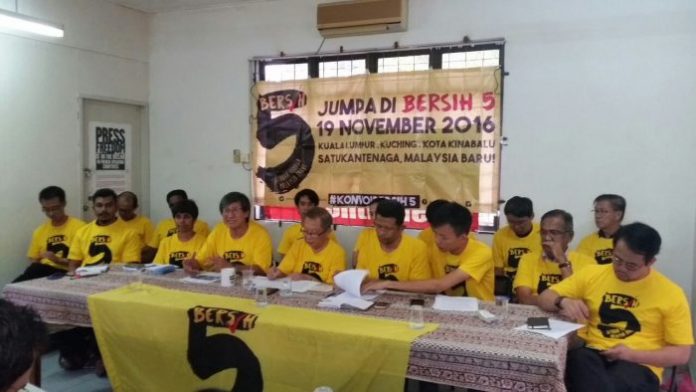 Amal Relief Malaysia, a wing of Parti Amanah Negara, will assist in providing security for the Bersih 5 Convoy activities in Penang, the Penang Bersih 5 team announced today at the Aliran office.

The Penang Bersih 5 contingent, consisting of a broad base of civil society organisations and individuals including representatives of Ikram, Aliran, Suaram, Hindraf, the Malaysian Trades Union Congress (MTUC) and Amal Relief Malaysia (Arif), are pleased to announce a week of Bersih 5 activities in Penang.

The activities on 8-15 October are part of the lead up to the Bersih 5 rally on 19 November in Kuala Lumpur, Kota Kinabalu and Kuching.

The five demands of Bersih 5 are:

These demands clearly reflect the needs of the country at this time.

From the north, the Bersih 5 torch, which has travelled through Perlis and Kedah, will make its way to mainland Penang on 8 October and subsequently to the island during the week. There will be a number of activities on both the island and the mainland during this time including flashmobs, leafleting at night markets, photo exhibitions and public talks.

The public are cordially invited to the following public talks:

Bersih 5 T-shirts will be made available for sale at RM20 at all the public talks.

The Bersih 5 torch will leave the island on 15 October and meet the Perak Bersih 5 contingent at Parit Buntar, where it will continue its journey.

Bersih 5 needs support from all Malaysians. Now, more than ever before, concerned citizens of Malaysia must come together in unity to fight against corruption, greed and injustice. Money has been stolen from the Malaysian people. Money, which could have gone to meeting the needs of the people, has ended up in certain people’s bank accounts.

Laws (such as the National Security Council Act) that are repressive and unconstitutional have been enacted. Re-delineation of seats has been done in such a way that would result in lopsided representation of the people in legislative bodies. A climate of extremism is pervading across the country. We must all stand up to contest and challenge this.

The struggle for a better Malaysia will need all of us to get on board to protect our basic freedoms and uphold democratic principles. Support Bersih 5 and make your way to Kuala Lumpur, Kota Kinabalu or Kuching on 19 November

Besides this, the political parties so far supporting the Penang Bersih 5 campaign are PKR, DAP, Amanah and PSM.

AG Apandi Ali confirms that his office has received the request from Switzerland’s Office of the Attorney-General (OAG) under the Mutual Legal Assistance in the alleged embezzlement and money laundering involving 1MDB.

This was the Swiss OAG’s second request to gain help from its Malaysian counterpart under Mutual Legal Assistance, after the AG’s Chambers here claimed it did not received the first application.

Red shirt thugs are not welcome in Penang!

They will be there to cause disturbance – knowing that they have the immunity from the police(?)

Immunity from instant arrest (for physical violence) in situ.
They can cakap tak serupa bikin (buat arrest).
tell me, any arrest so far of these Angry Red Birds who beaten up others?

Many pictures are circulating on internet/whatsapp/fb showing Umno guys who were with Najib are now wearing red as Jamal Thugs, including that bearded guy.

You sure need some fundings from the public !
Of course, never from that sort of RM52 millions cash in Sabah !

Bersih is timely when top civil servants like the Sabah duo are corrupted to the core.