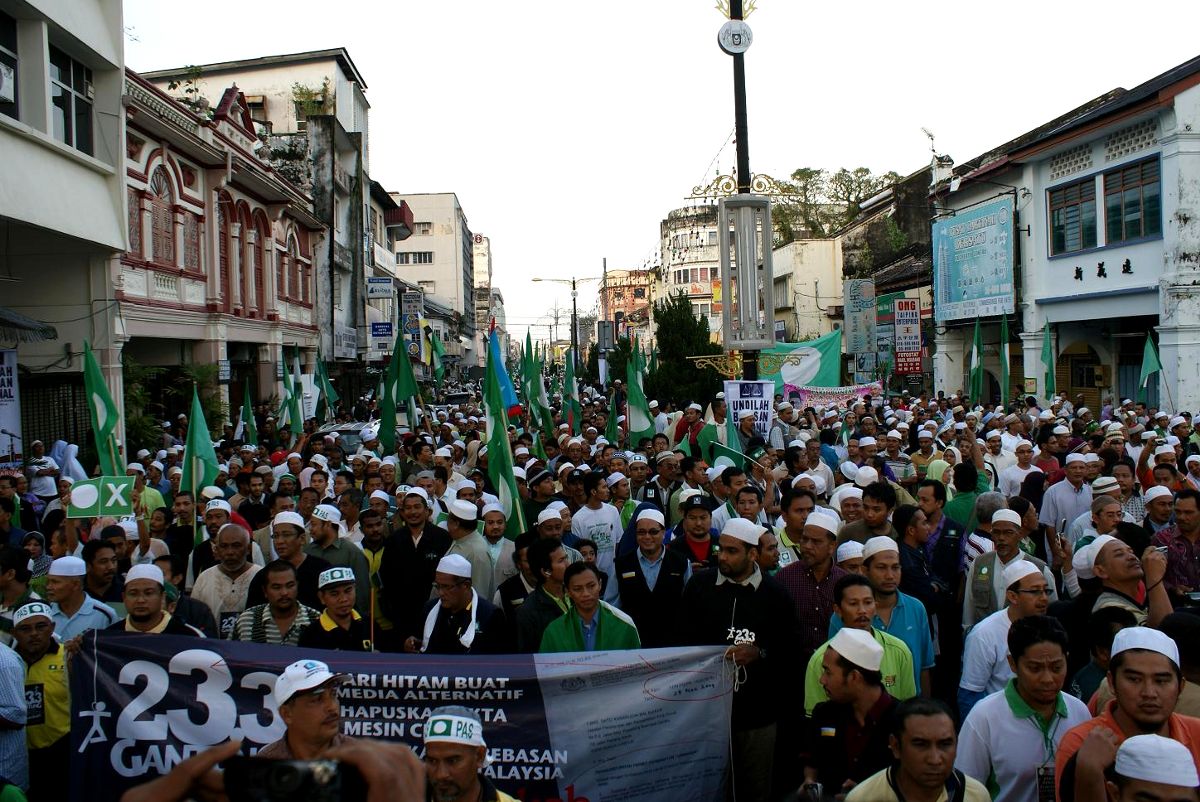 Taiping was jammed and packed with supporters. The police presence was felt with a helicopter above. Pakatan had 30,000 supporters compared to 5,000 for BN. We had fun with the Mexican wave, Indian dancing, crowd singing, families on an outing, young adults and old retirees. All converged into melting pot of Malays, Chinese and Indians.

Malays holding DAP flags. Indians wearing Pas T-shirts. Chinese chatting with one and all. People came from as far as Trengganu, Tampin, Damansara, Shah Alam, etc. Only sour note was when Karpal’s was pelted with water bottles by Umno Youth.

bukit gantang voter on March 31st, 2009 at 11.42pm
I wonder why Nizar is now IR HAJI MOHAMMAD NIZAR JAMALUDDIN on campaign posters. What happened to his Datuk Seri? Can anybody enlighten me?

he will be strip down his datukship …

karma on March 30th, 2009 at 7.55pm
It was massive… real massive support for Nizar. Democracy is at work. Let the best man win the by election. Nizar is a charismatic leader. He is a new found leader for PAS. The people’s general view here is that Nizar will win because the people here acknowledges him as a man who is highly educated and with Islamic credentials.

hahaha what a joke!charismatic huh?hmm maybe to u not to us here in bukit gantang. no malays want him!… there is nothing he can do…

Democracy is in the streets.
Plutocracy was in PWTC.

I wonder why Nizar is now IR HAJI MOHAMMAD NIZAR JAMALUDDIN on campaign posters. What happened to his Datuk Seri? Can anybody enlighten me?

You can cheat the people sometimes, but you cannot cheat the people always. People are not buying governmnet controlled newspapers as much, why? They know the reason best. It’s only fair that the media cover both PR and BN the same. Watching CNN was just interesting in the run up for the presidency in the US. This should be the way in Malaysia. Then we can talk about 1st class in everything and also Islamic in what we do.

Just make sure the number of voters are in place.
“They might use the already dead to vote…!”
“The Hantus might come out to vote…!”

Tun Dr. Mahatir said “Why do they need 6 hours just to count 750 votes…????”
when last time PR win there no issue of ghost voter.when BN win ghost voter.dei!ini mana punya law?law in playing american football does not aply for so call soccer.

karma on March 30th, 2009 at 7.55pm
It was massive… real massive support for Nizar. Democracy is at work. Let the best man win the by election. Nizar is a charismatic leader. He is a new found leader for PAS. The people’s general view here is that Nizar will win because the people here acknowledges him as a man who is highly educated and with Islamic credentials.

Taipingite, with all the slanted official media (including our tax-funded RTM) and BN using tax-sponsored resources (remember maximum campaign cost is supposed to be 150KRM for an MP seat), there are still people like you seeing the tree for the forest. Anil and other bloggers owe you and I nothing and would be free to express their opinion if this country were an actual democracy. You should be asking why tax-funded media blatantly support one party if you had any integrity. By the way, I dare you to demonstrate how this is not accurate: “if nizar wins, it’s people power,… Read more »

I find it amusing when the MSM too enbarrased to show a puny BN crowd take only close up shots.

Just make sure the number of voters are in place.
“They might use the already dead to vote…!”
“The Hantus might come out to vote…!”

BN BANNED HARAKAH AND SUARA KEADILAN PAPER ,
IS INDIRECTLY TO GIVE WARNING TO OTHERS PAPER.

Hidup YB Nizar the TRUE MB of Perak !
A Leader of Great principles & integrity not to mention intelligence and one who like YB Anwar Ibrahim care for ALL the RACES unlike Umno who only care for Umnoputras !
This by election is about choosing between Good Governance,
Fairness, Truth & integrity vs Corrupt, Racist Deceit & Arrogance.
Remember ALTANTUYA and all the LIESSTEALINGS of the whole stinking episode………that stinks to high heaven !
…
Hidup REFORMASI ! Hidup Pakatan Rakyat ! Hidup Nizar !
Hidup KEBENARAN !

Dato Seri Nizar is a sure win ! I don’t even have to look at the picture.

Voters or Not .You can tell that’s the voices of Democracy.

We walk extra mile for Democracy..

If Nizar lost, I will drop my pants!
Are you prepared to do likewise if BN failed?

please do not pull numbers out of a hat.
and how about malaysiakini and all you hostile bloggers showing pictures of BN supporters?
and my sources tell me three-quarters of those so-called pakatan supporters are from outside perak, hence they are non-voters.
anyway, it’ll be a lose-lose situation for BN. if nizar wins, it’s people power, makkal sakhti, reformasi, hidup anwar and all that crap; if BN wins, then it’s vote-buying, cheating, postal votes, phantom voters.

Huge crowd, but how many percent would make a difference in the results. They could have been bussed over … 🙂

NTV7 news didn’t even mentioned a word on the huge support. They only talked about the Jerai PKR division – TV will balckout when things are doing well for PR. Let’s work harder to ensure 3 wins!

The Presence felt is just TERRIFIC.

Just forget about whether they are voters or not ,
if one can attract such an huge attraction is just another AWESOME.

IT’S A GOOD OMEN. LET’S HOPE AND PRAY FOR NIZAR, THE LEGITIMATE MENTRI BESAR OF PERAK

There will be more media blackouts and oppressions and baning of flags of Pakatan coalitions who are not contesting in the by-elections. If the EC and police ban us from displaying our party flags, we can still wear our party t-shirts and caps to show undivided support for pakatan’s coalition which is contesting. Nothing gonna stop us now! Hidup ketuanan rakyat.

Let’s not be over confident. Supporters are not necessary voters. So let’s have more people stepping forward and be counted. The way najib is moving, I’m afraid the days of I give my vote to PR might be enough anymore. Do more.

Long live PAS for ALL…you’ve got someone that going to be your great leader in the near future! DS Ir Nizar – a new born leader for all malaysian !!.