Several BN supporters at the nomination centre for the Bagan parliamentary seat yesterday assaulted Tasik Gelugor Pas information chief Abdul Rahman Kasim as he was shaking hands with a few of them.

Abdul Rahman, known for his inter-faith initiatives in the northern region, was passing along Jalan Raja Uda in Butterworth yesterday when he noticed a crowd milling around the Kwang Hwa School.

He got off his motorbike and approached a group of about 200-300 BN supporters, about 80 per cent of whom appeared to be Umno supporters.

Clutching a Pas flag in one hand, Abdul Rahman, true to form, started shaking hands with a few of the Umno-BN supporters and members, including Bagan Umno chief Abdul Latif Mirasa.

One of the BN supporters then tried to press a BN cap on Abdul Rahman’s head, but the Pas man tossed it away, protesting, “I am a Pas member, not a BN supporter.”

Someone then shouted “Agen DAP!” and four or five unidentified BN supporters, around 30 years of age, began kicking and punching Abdul Rahman.

The 56-year-old ran for safety to a nearby backlane followed by several of the assailants, while others in the crowd urged the assailants to restrain themselves.

Abdul Rahman then bumped into two TNB personnel, who calmed the shaken Pas man and then offered to retrieve his motorbike for him. He later lodged a report at a police station along nearby Jalan Ong Yi How.

Abdul Rahman told me over the phone that four or five of the blows had connected and he suffered a swollen lip and a slight cut on the head.

Umno folks have been playing up Pas’ purported supporting role (“DAP agent”) to big brother DAP, but in the English press the BN sings a different story:  ‘a vote for DAP is a vote for Pas’. The BN can’t make up their minds which is which. 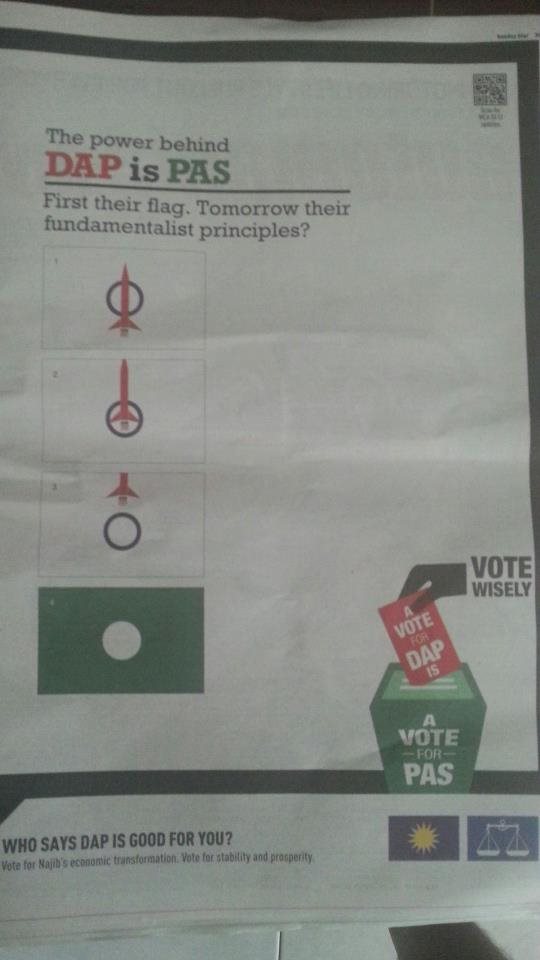 Abdul Rahman Kasim, carry on your good work. Every man would have his account balanced during judgement day. Don’t be disturbed by brainless actions of the retards.

2% of the filthy rich in this country controls 28 million Malaysians. The 13.3 million voters must put a STOP to all this nonsense. We must stay united and resolve to wipe out corruption now and clean up Malaysia.

No matter which side wins, the 2-party systems are here to stay – providing a check and balance to the ruling government. The people and PR is stronger now to ensure that this system works in the future and for generations to come for the benefit of the rakyat. The umno/bn rule for too long without challengers and hence their arrogance and perverted governing.

All these is Mahathir’s doing..In the past, you never hear of these things.. In fact, in the past, it was PAS youth who were really more the samseng up north. How UMNO/BN has fallen to those they used to look down on..

It is sad indeed that political dinosaurs, once political giants like MCA had resorted to placing such contradicting advertisements for PRU 13. It just showed their mind sets never changed. They still believed the Rakyat chose them to lord over the people not to serve them. They just do not have ideas to counter or have new plans to offer Malaysians. It is still, “A Vote for DAP, is a vote for PAS”! Sounds funny when the Chinese community had largely embraced PAS more than UMNO/MCA/MIC/GELAKAN put together. It is still the usual scaring tactics, but will it work, MCA?… Read more »

Yeah violence trending everywhere cause they are scared. All over the net many evidence of huge crowds for PR. Only weapon left to fight Malaysian who love Malaysian. FEAR.

Shaking hands with the Flintstones is hazardous to the health.

One must also be prepared to avert being casualties to a party on the verge of extinction! NEVER VENTURE alone, bring pepper spray if you must or even chili or tumeric! Thet travel in hooligans and thugs groups. In Penang this DKKs are just like their PERKASA patron..Product of abusive and rule by the rod parent!
Don’t try to offer friendship to minions too, they mostly scarce material between the ears which was why they relegated to menial duties and jobs!
FORGET the POLIS …

A vote for DAP is a vote for Pakatan Rakyat and a Vote for PAS & a vote for PKR.
Yes that is unity and solidarity for all races

The example above is ample proof.

Time BN start learning that soon to be opposition party, they will not be allowed to raise their hands on anyone.
The PDRM will be empowered to be an honest broker.

Encik Abdul Rahman Kassim you are obviously a true gentleman. It is sad that there are still many among us who has so much more to learn. I would gladly shake your hand.

The PDRM have become an effective tool of the UMNO/BN. They have become ineffective in maintaining law and order in the country. You do not see them when you need their assistance. Even when they are around, they act as ‘tourists’ watching the fun when the UMNO/BN goons go on a rampage and harass and intimidate innocent people who are not as rabid as them. Numerous assaults and thuggery has happened in the presence of the police force but they are more often than not just bystanders. They fail to discharge their duties impartially. Their action if any is to… Read more »