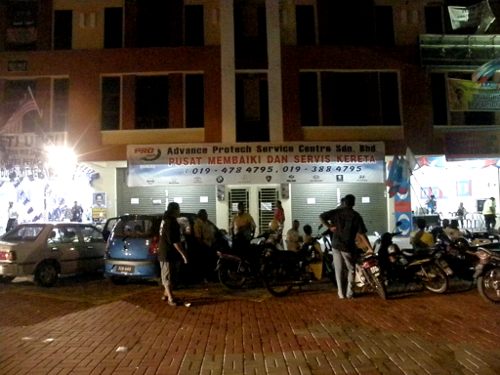 An unusual situation in Bukit Selambau with the ops centre for the two parties in “close proximity” not far from the Sungai Petani town centre. And in front of both ops centres, a police canopy booth at a bus stop on a main road. Yes, the canopies are back with a heavy police presence in Sungai Petani and surrounding areas.

When I was there last night, a mini ceramah was in progress at the PKR ops centre. It was funny to hear a PKR speaker using a sound system to denounce the MIC and saying stuff like “Kita mesti menolak MIC” while a couple of doors away the MIC volunteers were nonchalantly carrying on business as usual, paying no attention. All in a day’s work.

A Malay PKR supporter tried to use the race card on me, thinking I was a voter in the area, as he tried to convince me who to vote for. “If you vote for our candidate, you would get an Indian to represent you in the Kedah state exco for sure. How could you refuse that?”

Some things are hard to change.

The PKR and the Pakatan in general also have to seriously review the way they select their candidates to avoid the sort of local disgruntlement we have witnessed. Perhaps a party selection committee, using properly defined and transparent criteria, would be better placed to evaluate the suitability of candidates rather than leaving it all to party supremos.

The old Bukit Selambau town is actually about half an hour’s drive away from the ops centres: just a couple of rows of shophouses with the largest employer there being a plywood factory employing mostly foreign workers.

PKR is right in not selecting Kanaivanal as the candidate for Bkt Selambau.

…. this Kalai fellow is a smooth operator with “black and white” connections.

Manikumar seems to be liked by all people – Indians, Chinese and Malays. The lost one division here is not going to make any impact on the support for Manikumar. Only the head seems so disgruntled but the people in general know the reason why he is not chosen as a candidate. PKR must have done a thorough homework before choosing the right candidate for this by election. A good job, indeed. Once bitten twice shy. Let’s not delve deeper into this. The people in this constituency and most Malaysians know why. PR like BN need leaders of high calibre.… Read more »

indian mudah lupa. lol no wonder being whacked upside down the last 52 years… and you still have samy malu to save your …!!!

We were fed up with mic propaganda. A vote for pakatan will kick mic out from bkt selambau.

BUKIT SELAMBAU 15 CANDIDATES VYING FOR THE ONE SEAT! WOW I HAVE LITTLE DOUBT IN MY MIND AND IN PEOPLES MIND THAT THIS IS THE JOB OF THE … WHO HAS SO MUCH ALLEGEDLY STOLEN MONEY FROM THE PEOPLE THAT HE HAS PLANTED SO MANY NEW OR UNKNOWN PERSONS TO STAND FOR THE SEAT SO THAT VOTES CAN BE SPLIT, IN THE HOPE THAT (HIS PARTY) CAN WIN. NO WAY PEOPLE ARE GOING TO VOTE FOR THIS DEAD PARTY AND ITS LEADER. MALAYSIAN INDIANS SHOULD WAKE UP TO FIND ANOTHER MOTHER…. MACC SHOULD INVESTIGATE THIS HORRIBLE AFFAIR RATHER THAN GOING… Read more »