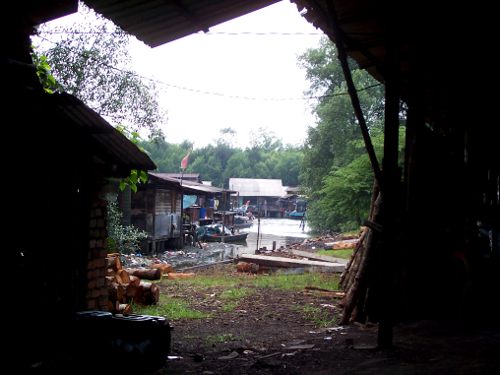 A rustic scene from Bukit Gantang – Photo by Jong

Many expect Pakatan to easily win Bukit Gantang. But Pakatan campaigners, it would seem, are worried about over-confidence leading to complacency.

Wong Kah Woh reports from Ipoh in his blog:

I was at Simpang PR-DAP ceramah yesterday with 300 people attending. The atmosphere is worrying in the sense that the public are too confident of Nizar victory while in fact that is not the case. Not to forget, Barisan is also having free dinners here and there to buy votes, more particularly there were two free dinners of 180 tables each just nearby our ceramah yesterday.

The crowd attending our ceramahs play a very important role. It is not only that they have to be convinced to vote for Pakatan-Nizar. They must also help to convey the message to the rest, to the fence-sitters, on how to ensure a Pakatan-Nizar’s victory.

In Chinese area, BN components lack new ideas. They can only use the same old tactic which had proven to be a failure on 308. DAP is being bad mouthed as supporting a “fanatic-religous-Islamic State”. In Malay areas, BN is accusing Nizar of being a boneka (puppet) to the Chinese and DAP.

Although a lot of people hold the view that Nizar can win, even winning bigger, I will not be that confident. It is a 50-50 battle. Due the attack on Nizar by Umno, it is even more pertinent for us to help Nizar, especially in Malay areas…

LLHeng
such a idiot!where got PKR here in bukit gantang…u see PAS,PKR and the … (well u know the name), is totaly diffrent party and no such thing as Pakatan Rakyat.oh sorry they are not register under the ROC so PAKTAN RAKYAT is pakatan haram… as u know, this is a malay majority and malay people dont simple menderhaka to sultan. nizar? well he’s not a malay…

to indian voter in bukit gantang, do not vote for nizar.if he wins and he goes to parliment he will continue marginalize indians.masih banyak indians living in the estate have no ic, no job etc.so what roslan sharum did?nothing!virtually nothing!so vote for ismail safian…an new hope!

Please do not speak thru your …., “Sang Kancil”. If not you will be ended up in a cooking pot for the Bkt Gantang voters especially the soon to be victorious PKR party. You know, “kancil” meat is real tasty, yum yum!!

sabahan..u are not bukit gantang people.so shut the … up.BN is not rasist like DAP…. nizar dont solve local issue and i bet he cant because he also a have pasir panjang to look up.malay people dont vote for pupperters like nizar.sorry!FYI, now PAS always give keropok and kain batik to people.what a laugh what a laugh says umno rasuah, pas also rasuah the best is after the solat jumat bagi rasuah.come on please!TAK NAK TO PAS!

anwar, If you don’t vote for Nizar than you are the … of our country’s democracy.Do you think when you vote for BN they will give you 999 land title? They will share their fat commissions with you? Did Khir Toyol ever ask you to joint his luxury trip to Europe. Malays and Chinese are the same. Both pay tol, both pay taxes and your tax monies have been abused for don’t know how many decades.So don’t be too envy about these little sweets for Chinese when the umno-putra takes all inclusive of your pride… So be careful, don’t be… Read more »

Over confidence…that’s the grave risk.

Hopefully, workers on Ground “0” will keep the flow of info unhampered.

It begs repeating how significant a win is for Nizar but if the little of what I know of the man, let’s hope his humility in the meaningful stride he’s taken will keep the pace at no slack. Forget the sleep!

This is too good to bungle!

If you hear something, splash it. It’ll help!

Like the average Malaysian public opinion, Americans too are alike. In the great John Wayne days, they fought off snake oil peddlars and shooed them away. But by God a few people actually healed themselves with snake oil.

Obama fought hard against the larger American public opinion. Most of them wanted to hear snake oil. Obama could have obliged. His campaign managers, like Abrams, [is that his name?] must have substituted the snake oil with “minyak kapak”! 😀

Dr Su & Jong, please read carefully before spewing stupidity from your mouths, as your foolishness comes clearly indeed. Jong, too bad you are as stupid as Zambry Kadir in your writings.

Hahahaha! – Obama snake oil salesman? I thought that title was specially coined for the MB of Perak – Zambry Kadir?

The American system of selecting their presidents will be the first to identify any ‘fake-pedestal-messiah’ that you claim should there be one. You obviously fail to see one right under your very nose in Bolehland! 😀

Go read what Salak has to say about those snake oil sellers of Perak and Sarawak:

speaking about chameleon,
after 50 years of ruling..
RAKYAT know who is the real chameleon…

Sang Kancil I think you are talking terbalik. Obama is US President , not Hillary!

malays in bukit gantang will never vote nizar… the issue such as TABIKA KEMAS, 999 land issue really make malays fedup with him.some more most of the malay contractor dont belive in him anymore because when he was a MB the contract (allegedly) all goes to DAP contractor. now this is issue that nizar have to counter.but unfortunatly he fails.most of the ceramah mentionaning about islamic state here and there especially in malay are but when go to chinese area.no islamic state.just like chamilion.nizar also always marginalise malay people here in bukit gantang…so malay people like me feel left behind.how… Read more »

I do hope nizar will win. Latest news in the UMNO is throwing in TDM. Although people can say that he did not help his son to win, he may have a big impact.

Sang Kancil: Although I think you are slightly unfair to Obama, I agree with you in essence. That woman was an inspiration campaigning even when all seemed lost.

Over confidence is definitely a killer. It may snatch defeat from the jaws of victory. Remember that April 7 is a working day (EC can you explain why?). If many supporters don’t bother to come back and vote, Nizar will be on shaky grounds.

Please persuade voter you know to go and vote, even if they are outstation. Every vote counts. If you don’t vote, some phantom voter may take your place and they don’t even have to be physically there to vote.

Very true indeed. As a Hillary Clinton supporter during her fight against Obama in the democratic primaries, overconfidence is a killer, and there were tense moments like during the Texas and Ohio, and Pennsylvania Democratic Primaries when it seemed that Hillary might lose to the snake-oil salesman Obama instead of winning comfortably. Nizar must take a leaf out of Hillary Clinton. She campaigned vigorously, up in fact at 6.30am one time to greet and ask for the vote of factory workers entering into an Ohio factory to work, and embedded reporters describe how she had many 4-5 hours sleep nights… Read more »