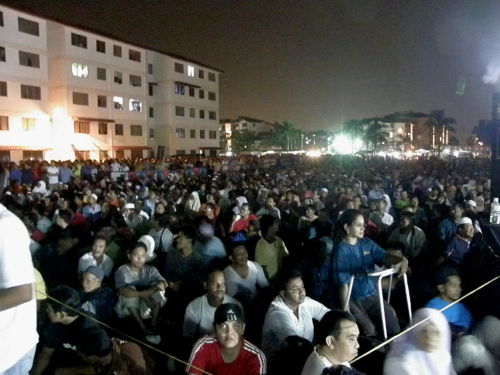 A large crowd, estimated at between 10,000 and 20,000, turned up to listen to a ceramah in the heart of Permatang Pauh, opposite the Seberang Prai Polytechnic. Among the speakers were Anwar Ibrahim and Lim Guan Eng.

The event also saw the launch of the national PKR youth wing’s election machinery with representatives from each state taking a pledge.

The PKR security personnel put up a much better, more organised performance with friendlier arrangements for the media. Penang PKR deputy chairman Mustapha Kamal Yusoff told me that the party had carried out a re-registration of their security personnel. He said they were still unable to identify the “security personnel” who had attempted to throttle a photographer from a Chinese newspaper at the last ceramah. Anyway, neither the dubious “security personnel” in question nor the Chinese photographer was around (Someone told me she was away in Beijing covering the Olympics!).

One of the speakers on the night (not from PKR) was someone who had earlier in the day been protesting outside the Bar Council forum. After rubbing shoulders with Umno protesters in the morning, this time he was telling Umno “jangan cabar” this and that. I didn’t know whether to laugh or cry.

Certainly, the PKR and Pakatan as a whole needs to work out an acceptable solution to the problem of what happens to families when a spouse converts to Islam. They cannot sweep this issue under the carpet and hope it will go away. Otherwise, even if the Pakatan comes to power in Putrajaya, they could be faced with a serious split the moment a case like this hits the headlines.

At the stroke of midnight and as the ceramah drew to a close, a cake was brought out to celebrate Anwar’s birthday.

Blog reader Mohammad Firdaus Christopher was one of those present:

Yes, I was there as well with my father in law and few neighbours & the crowd/ atmosphere was simply awesome. DS Anwar, as usual, with his excellent oratory skills captured the hearts and ears of the crowd once again. In short, after talking to some local folks, will put my $ on DSAI re-capturing the seat with > 25,000 majority

Let’s put aside our races and religion and accept ourselves as Malaysians and each and every Malaysians is responsible to work hard for the betterment of our Beloved country. A country clean of corruption should be the priority. What is race and religion means to us if our country falls apart. We are all from adam and eve, for some we are from ape or whatever form I myself don’t give a damn. As for religion, what’s the purpose of having so many mosques, temple or churches if most of the time its empty. Don’t politicised religion and races. Lets… Read more »

Lets all Malays, Chinese, Indians, Eurasians, Singhs, Sarawakians, Sabahans etc…join together as MALAYSIANS and help move the country forward.
Now, only PKR can do it. BN is gone.
Make sure every PKR supporters make an effort to help PKR in the Permatang election. Ensure that there is no foul play by our desperate BN goons.

“yesterday’s bar council demo”.
Hope your valued comment helps to cool down the strong emotional currents amongst us.

Politics is not clear cut as black and white. We must not lose sight of the bigger picture which is a new hope and direction for our country.

We have an opportunity now and must make the most out of it lest we may have to wait another 50 years.

He’s a politician by nature. As an underdog trying to move into the top spot, you can’t get anywhere without being populist. As for promises, I look at it this way. I’m not 100% sure he’ll fulfill his promises although I believe there’s no reason why he won’t. But I’m 100% sure if we stay with BN, we’ll have the same corrupt, racist system for the next 50 years. So what do we have to lose?

Lets send DSAI to parliament first and later on only we take care of this belligerent politician.We cannot expect PKR to have 100% wise people in the party,human have their own weakness,some are outright stupid and some are a pain in our a**!

We have to unite and ensure BN candidate is defeated and lost badly to send a crystal clear message to BN government that their days are numbered and it’s time for a change for the better.

Well, I think that people need to be smart in judging and evaluating the ‘things’ that Anwar brings with him. His promises are not to be heard and forgotten since he always said things that he didn’t even intended to do. A populist by nature.

We should not blame the whole party for one renegade MP. Read MalaysianInsider today, there’s news that PKR may discipline the MP. PKR has also issued a statement to condemn the protest.

PKR is still the best alternative we have to Umno hegemony. Don’t let one bad apple distract us from the overall picture. The party does not support the action of this MP, that’s good enough for me.

Refering to one of the speaker (not from PKR). How can Pakatan Rakyat allow a speaker with fork tongue to be a speaker? He is a fanatic and racist to us, RAKYAT. He may be one of them calling chinese babi and balik China.How can we, RAKYAT trust such a person like him and Zul also a MORON who lead and create hooligan?

Dont be surprise the action of the overzealous mp who disrespected a civil discussion meeting will be used by bn and result in protest and spoilt votes.

I think certain people are not getting it. The reason Zulkifli and others from PAS and PKR Malays went to that meeting was to steal the thunder from AMENO which wanted to use the meeting as a launching pad for the Permatang Pauh by-election and eat out Anwar on it. No, AMENO is wondering where they were hit and anyway after people continued to ask questions, PKR released a statement condemning the protests.

Dear Anil, I think most people fail to understand the tactic that PKR and Pas used in yesterday’s bar council demo. By being there they obviously managed to defuse a potentially explosive situation. They actually took the edge out of the threat used by UMNO vehicle GPMS (read Malaysiakini article), no doubt Zulkifli Nordin did get carried away. Malaysiakini reports that Unit Amal of Pas (admired even by Lim Kit Siang) actually bodily prevented protesters from storming the bar council building. In all fairness most of the problems associated with conversions is actually caused by the convertee themselves, who for… Read more »

a leader is chosen by the people, and this is democracy. DSAI seems the favourite to become the next PM of this country, so let it be. he is the choice of almost 90 percent of malaysians, today. DSAI can deliver and he has the charisma and intelligence to bring the country to the front. almost all world leaders appreciate this man just just because of his vision and openness. DSAI has thus to be given a chance. politics has to be matured enough for the country to progress. politics does not belong to BN, exclusively. if the people want… Read more »

Matt, is he really? One of the South American countries might be ideal, just like after WW2.

Malaysia can only be strong if the very foundation of the Nation is based on tolerance.Pkr Nordin unfortunately doesnt belong to this fold of mentality.
Malaysians in Peninsular should emulate the Sabahans where inter religious harmony is a fine example.we have members of the same families who are of different religious beliefs under one roof!
We cannot disown our own family just because he or she is non-muslim just as we cannot disown fellow Malaysians if they are not muslims!

HAPPY BIRTHDAY Dato’ Seri Anwar Ibrahim. May you have many, many more to come!

I’m a Penangite with many friends voting in PP in the upcoming by-election. If I can command them, I’d just say don’t vote. I don’t understand PKR ANYMORE. First they say its multiracial and all, but their MP doesn’t share the party’s views.

I’m disappointed. Come GE13, things will be different – very different from GE11 and 12.

It is time to wake up that sleeping PM that the crude oil prices has dropped. Petrol price must drop immediately. Otherwise the rakyat will be subsidizing the oil companies.

Yes, I think today is a day we should show our appreciation to Anwar Ibrahim for all he has gone through and still going through.

“Happy Birthday! Anwar. May all your dreams become true.”

from a Well Wisher

Most of us have no problem with dissenting opinions, even if it’s within the same party. After all, We can and should agree to disagree. However, we read news reports from Malaysiakini that we have a PKR MP threatening to use violence to stop another party from expressing a differing opinion through a public forum. From the same reports, even PAS leaders/members who assembled to protest were peaceful and better behaved. In fact they, together with the police, blocked the crowd from storming the building. This is clearly unacceptable and DSAI leadership must disassociate the party from this. The offending… Read more »

Anil did you hear about mahatir talking about migrating.this shows how scared these t——- are, if you photos are of people from pp the result won’t be in doubt.

I feel that we need to tread carefully and with doses of wisdom in tackling this man-made sensitive issue on religion. The present BN goverment can never be approach to deliberate the subject as is obvious from their active role in derailing the forum by the Bar Council. We stand a better chance when a new goverment takes charge. It will not be easy as the harbinger of destruction will still be around but at least then boh sides will be given the opportunity to be heard unlike the mafia style approach that is the norm at present.

I think PKR should disassociate from the ‘Cabar Cabar’ man because PKR is supported by Malaysians and not Islamist or Malay. The agenda of PKR is Malaysia for Malaysian therefore people like them with still the pathetic racist UMNO roots should be expunged.

And sometimes these people forget when they insult other religion because the Malay forefathers before Islam’s arrival are either Buddhist, Hindu or Animist. By insulting these other religions they also directly insult their nenek moyang.

How pathetic is that.

A vote for Anwar is a vote for TRUTHMULTI RACIAL PARTY and also GOOD GOVERNANCE as against the CROOKS,LIARS<CONSPIRATORS & ROBBERS of the Nation Wealth……HIDUP ANWAR !! REFORMASI !

1. An MP and also a lawyer who encourages violence is no MP of mine. What sort of character and behaviour is that?
2. Are those the type of future MPs to lead us to 2020?
3. Get rid of such racists and satans first before you even ask others to vote for you.
4. Do not even try to justify such uncout behavior and characters in yourteam.