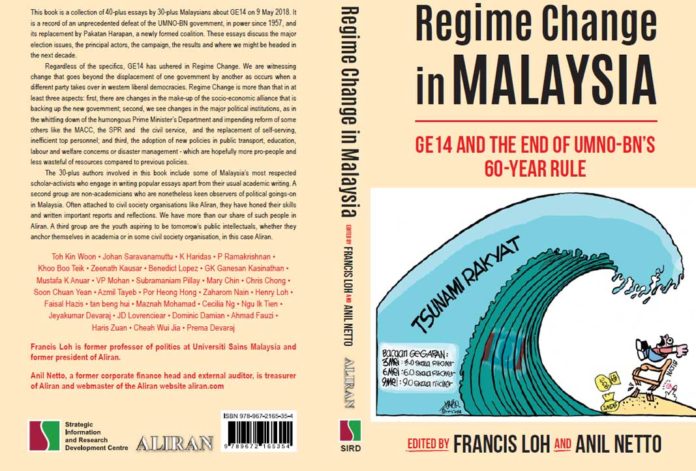 Developments over the past 100 days of Pakatan Harapan rule have given us some hope that we are on the march towards not just a more developed Malaysia, but one that upholds freedom, justice and solidarity.

In this regard, Aliran has just published a comprehensive and important book entitled Regime Change in Malaysia: 60 Years of UMNO-BN Rule End, edited by Francis Loh and Anil Netto (Petaling Jaya: SIRD and Aliran, 2018).

With some 40 chapters from 30-odd writers, the book looks at some of the general election issues, actors and the campaign itself. It also analyses the results and some of the challenges in store for the future.

The book, which is already ‘trending’ in bookshops, will be officially launched in the Klang Valley:

[Join 14,500 other subscribers – subscribe to Aliran’s free daily or weekly newsletters or both.]

[The book is also available at the Aliran office in Penang 04-658 5251, the Gerakbudaya store in Petaling Jaya and other leading bookshops. You may also order the book online from Gerakbudaya.]

All are cordially invited. You will be able to meet the editors and some of the contributors at this event.

We also have have a line-up of ‘young’ scholar-activists who will share with us their views on the general election result and the implications of regime change for the future.

They will also be joined by two veteran academics:

About 20 contributors were present for the soft launch in Penang held in conjunction with Aliran’s 41st anniversary on 8 September (photo below).

Here is the Table of Contents:

INTRODUCTION: Regime change and all that Francis Loh

PART V: TOWARDS A NEW MALAYSIA

Aliran is ‘out of phase’ by 100 days, reporting on outdated news by internet standard, and attracts low interest except from history scholar like Prof KKK (local one, not that one associated with BlackKklasman).

Today most readers are tuned to the life story of Fatso Jho’s celebrity exploits in Billion Dollar Whale, or Ram vs Shafee courtroom drama of MO1 trial.

Alirab still using old school approach, not capitalizing on new and trending issues but reviewing outdated and long gone events. Difficult to capture the interest of young readers. Furthermore the English used is rather complicated for average Malaysians like me.

Young generation now read trending news on internet and social media. Aliran needs to keep up to stay relevant. Content is good but the old method of delivery is no longer appealing. Just my view, not mean to criticise the great effort by Aliran.

Young generation will not read, they simply look at Zunar’s cartoon to get the necessary information.

… Najib want to become Robbin Hood and steal the Rakyat money to pay to Umno Malay(?) This don’t work anymore (although accept by umno) but by Islamic principles we want clean money not stolen money we want honesty not liar we want fairness not berat sebelah.

Need to have ISO mentality of traceability of the source of money. If a doggy-stained trolley is a taboo, what about illegally gained haram money even use to sponsor your holy land trip?

Wahai Najib, You left a big hole in 1MDB and the country on the verge of bankruptcy. To date, you have never explained where did all the money borrowed by 1MDB disappeared. Now we have the 3 books on 1MDB to explain where and how the money disappeared. Aren’t you ashamed? Many Malaysians were worried if Malaysia will end up like Greece or Argentina. Luckily, everyone was concerned enough to vote you and your gang out of office. Now we have a chance to rebuild the country and remove the kleptocratic stain caused solely by you. PS: PH must be… Read more »

Don’t be a cheapskate, go buy an original copy.
Cetak Rompak can affect livelihood of authors like Anil Netto.

Proceeds from the sale go to Aliran.