As the verdict for the Sodomy II trial draws closer, a defiant Anwar has vowed to carry on the struggle for political reforms.

He said many people had been asking him what he expected the Federal Court verdict to be on 10 February.

Speaking at a ceramah near the Batu Uban Adun’s Service Centre, a relaxed-looking Anwar told a crowd of several hundred that he was convinced of his innocence under the law. 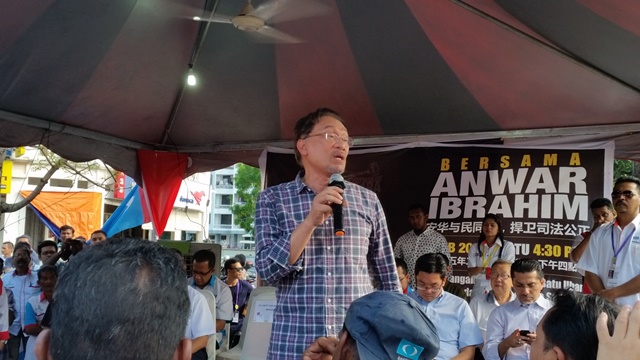 But if he did end up in jail, he urged the crowd to carry on the political struggle. “Lawan tetap…”

Anwar warned Malaysians not to succumb to irresponsible attempts to manipulate issues of race and religion so that minor matters are blown out of proportion. In contrast, serious corruption did not seem to be a problem for those stirring up such communal sentiments, he noted.

He urged Malaysians to come to the aid of those in need, irrespective of ethnicity, while praising flood relief efforts in the East Coast that crossed the boundaries of ethnicity and religion.

The 67-year-old politician took a jab at a recent call to boycott Chinese businesses that had not lowered their prices. “Sure, I am against unscrupulous traders, but they aren’t limited to any particular ethnic group.”

People should be asking why TNB tariffs had remain unchanged. “Why are they silent about this? Is it because it is their people who are in charge there, and it is easier to bully the small traders instead?”

He said that the country was facing serious economic problems.

It was time for us as a nation to reflect on the disasters and tragic incidents we experienced last year and discern where we as a nation had gone wrong, he said, noting that some saw this series of bad news as a test from God.

As he left the venue, heading for a larger ceramah in Ampang Jajar on the mainland tonight, the thunderous drums of lion dancers reverberated in the evening air while the thumps of Indian drums joined in the rhythmic din.

Nearby, small traders were setting up stalls for the weekly pasar malam. It seemed like just another ordinary evening.

And yet, behind this ordinariness, a nation awaits with bated breath the outcome of Anwar’s trial, a question that is never far from the lips of coffee-shop talk.

Whichever way it goes, the verdict will surely come under the spotlight of the international media and have far-reaching implications for domestic politics, including Umno’s own internal factional struggles, and the credibility of the current administration.

Anwar himself sounded upbeat. “The majority of the people, 52 per cent, voted for us. And if I am jailed again, we will win 60 per cent of the vote (the next time)!”

The very fact that a court decision can be reversed clearly shows that the decisions made by judges are not infallible. Even in their best professional self, judges are still just humans with certain degrees of biasness and subjectivity which in turn are dictated by believes, convictions, sentiments or even pressure. Therefore, it is not surprising that different learnt members of the bench saw and interpret a same set of evidence under different clauses or perspectives of the law and arriving at different or even opposite judgments. As such, the fate of an accused person is more often than not… Read more »

DSAI was right, if TNB is not reducing electricity tariff, how can cost of doing business can be brought down to allow lower pricing? Ismail Sabri forgets that not all traders operate their business at Pasar Tani or Pasar Malam with negligible overhead.

The meeting lasted less than hour. Have some discussion, tea & makan and then click for a good photograph to tell the world that they are one united front. So much so for a united front or the artful dodger.

Don Ananmalai ; Siapa yang monopoli most of the housing development in Penang.

At this moment, the most excited person will be Hadi Awang ?

Think about all the tax payer ringgits wasted on this farcical political persecution of Anwar Ibrahim.

It has also made us a laughing stock of the world.
Third World politics UMNO Baru-BN style, I guess.

Lets face the fact, 52% or 60% Pakatan will still not be the govt. In fact it will be a BN Malays govt. Even if Pakatan win, PAS will hold the trump card. Either PKR and DAP kowtow to PAS and agreed to hudud or an Islamic State or PAS will go over and form a unity govt with UMNO. It will then be even worse, hudud and an Islamic State wll be a forgone conclusion. Do you want that to happen. Would the non Malay especially the Chinese want that to happen. We have at BN for 54 years.… Read more »

With existing overwhelming majority in the Parliament, it is the BN and not Pas, that is going to decide on the fate of the hudud private member bill to be raised by Pas. If UMNO were to break ranks with the rest of its BN partners in supporting the bill, then they are worse than Pas in terms of integrity as the hudud has never even existed before in any of the BN or even UMNO’s manifesto or policies. It would denote a sudden change of direction or principles after 54 years of rule without any thoughts about their own… Read more »

Chinese traders rather have hudud than Ismail http://m.malaysiakini.com/news/288698.html

There you have your answer from the Chinese traders.

While the country is facing serious economic problems, there you go blah-blah about race and religion!!! DANG!

Some said the usual outsourced thugs that greeted me havoc at Esplanade dare not buat kacau at this ceramah.
btw, no ethnic boycott at Old Town kopitiam at Bayan Baru.