Commander (rtd) S Thayaparan has launched a compilation of his online commentaries, No Country for Righteous Men, in one of the most well-attended events of its kind in recent times. Some 370 people turned up for the book launch on 21 January at the Royal Lake Club in KL to listen to Ambiga Sreenevasan, Azmi Sharom, Zainah Anwar, K J John and Thayaparan himself. 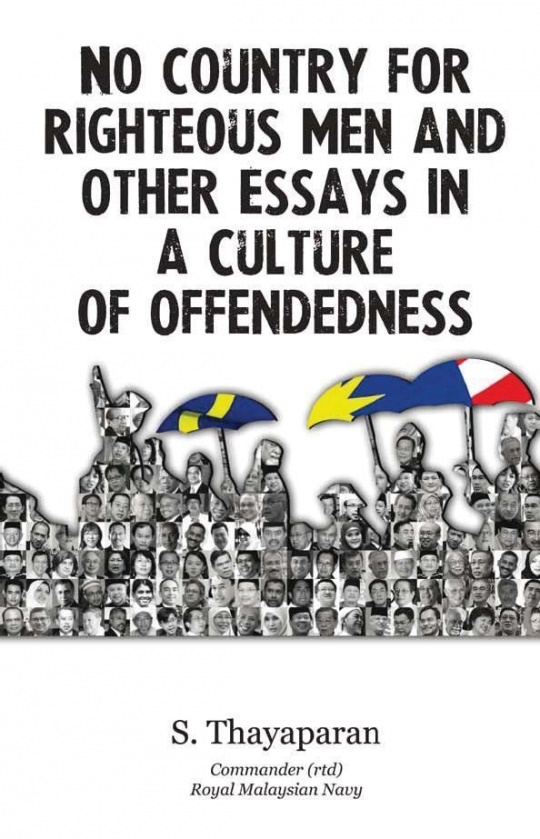 In an article for fz.com, Himanshu Bhatt describes the Thayaparan after a recent meeting with him.

GEORGE TOWN (Jan 21): As executive and commanding officer on a number of Malaysia’s naval vessels, S Thayaparan once oversaw the defence of the nation’s security while patrolling its deep seas.

That was a few decades back, following his graduation from the Britannia Royal Naval College in the UK in 1965.

Today, at 71, the retired navy commander still watches over the nation, albeit in a varied manner and from a rather different bridge.

Thayaparan now uses his depth of experience and insights accumulated over the years of service with the armed forces and his voluntary involvements elsewhere, by penning commentaries about the weighty and, many say, moribund state of affairs in Malaysia.

It has culminated in his new book, curiously enough titled ‘No Country for Righteous Men and Other Essays in a Culture of Offendedness’.

Published by the Strategic Information and Research Development Centre, the book is based on columns he had inked for Malaysiakini.com in 2012 and 2013 on the socio-political landscape of Malaysia.

From the excesses of Mahathirism to the expanding shroud of Arabisation; from wanton government malpractices to the political imbroglios that have riveted the nation; from the fervent Hindraf saga to the immensely gripping Bersih rallies.

Like an elderly sage, Thayaparan lends his perspectives and observations on paper, of these and many more issues with a measured, potent flow.

The earnest and impassioned nature of his critiques is grounded on a somewhat different Malaysia, one that he lived with in the past.

Comradeship among his old crew

He remembers, for example, the esprit de corps that he and his naval comrades keenly felt. They had come from a generation of sailors – as he puts it – “forged in the embers of the fading British Empire.”

In one instance, during the height of the 1969 racial troubles, Malay villagers attacked a lone Chinese crew-member of one of the ships he was on.

“The whole crew comprising mostly Malays were livid and wanted to take retribution for their fellow crew-member. This happened in Port Klang,” he remembers in an interview with fz.com.

“This did not degenerate into a major incident but I still remember the sense of community amongst crew-members.

“Of course, the power structures in the military are different from civilian life as are the obligations to them, but what I learnt is that human nature, Malaysian nature could be something more than just communal and religious preoccupations inspired or inflamed by men in power.”

His humble childhood also played a strong part in nurturing his sensibility.

Thayaparan grew up in the government quarters in Scott Road, Kuala Lumpur where everyone, he recalls, “fought, played and worked together.”

“More importantly, I started reading at a young age… Reading, I would say, especially during my formative years, was the biggest influence in my worldview today.”

Reconnecting with old friends through writing

Ironically, a career in the armed forces was not something he had considered when growing up.

When he was 19, he spotted an advertisement in The Straits Times for short-service commissioned officers to be trained at the Britannia Royal Naval College, Dartmouth and “on impulse,” applied.

“I wanted to see the world,” Thayaparan said.

It proved to be the beginning of a career experience that would fuse his intellectual proclivity with the adventurous spirit he yearned to let free.

It also led to him to work towards becoming the first Malaysian naval officer to study law and be called to the Malaysian Bar in 1985.

Fortuitously, since he began writing his commentaries a couple of years ago, many old service personnel have reconnected with him.

His former comrades are generally supportive of his current literate outspokenness, he said, even giving him insights or offering suggestions.

“Many of the views expressed in my writings are the by-products of discussions with service people, retired and serving,” he said.

Thayaparan however admits to have lost some friendships because of his views.

“These old friends suddenly say I am anti-Malay or anti-Islam.”

Most certainly, among the current events that he addresses is the violent intrusion of Sulu militants on the eastern coast of Sabah.

This is because he had himself operated in those waters during the Indonesian Confrontation and after.

In fact, his writings have given a unique outlet for sensitive but pertinent questions related to the episode, as well as to the military’s political relation with the government, to be aired.

For they reflect deep concerns only privately discussed by serving and retired members of the armed forces – and which he stressed “are important questions that need answers.”

Thayaparan cautioned that incidents like the intrusion crisis may happen again because of the “historical shenanigans of our political elite coupled with their present day interference of the military establishment.”

It is just one case among many that he has seen that unfortunately imbued him with pessimism of where Malaysia is heading as a nation and a person.

“I do think that the reality of Pakatan Rakyat as a credible alternative to Barisan Nasional is indicative of a democratic maturity of this country,” he said.

“However, I think that at this point, there is more form than substance in our political landscape and superficiality will be considered some kind of Pyrrhic victory.

“I also feel that class, race and religion balkanise us as a person, and my fear is that this will become the reality of the country geopolitically.”

When someone exposes injustice or hypocrisy and you cannot dodge easily, it is expedient to accuse him of being impolite, uncivilised, rude, seditious, etc. In Bolehland, this routinely extends to specially approved insults, demonstrations …

His pessimism is well-grounded. I also remember the good relations of Malay neighbours, classmates of yesteryears. The truth is the Malays have to decide what kind of future they want – now – they can’t assume, they can’t say tidak apa, They are not prepared for it after decades of Affirmative actions and not modernising their political system instead clearly deteriorated even as their wealth grew. The average Malays must decide and take responsibility – NOT look to their leaders, not eye it for personal gain, not blinded by ideology, sensationalism but reasoning, substance – grounded in EMPIRICISM – proof.… Read more »