Some 10000 people converged at the Expo site in Seberang Jaya within Anwar’s Permatang Pauh constituency in renewed determination to propel PKR and Pakatan to greater heights. 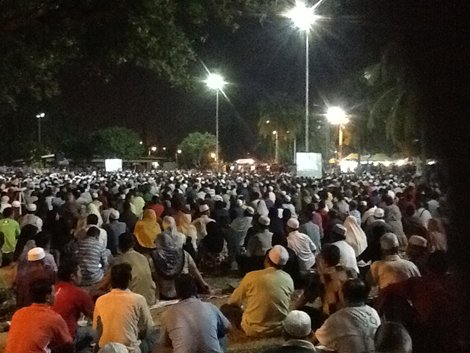 PKR strategist Saifuddin Nasution said Anwar’s release has had an extraordinary effect on Pakatan, galvanising the coalition and rejuvenating its supporters.

Among the other speakers were Azmin Ali, Mujahid Yusof Rawa and Guan Eng. Also present were Sim Tze Tzin and Toh Kin Woon.

Surprisingly – and refreshingly – I did not notice any uniformed police personnel around.

Some were disappointed that Anwar did not turn up. Instead he would be passing through this way this weekend on the way to the Pakatan convention in Alor Setar.

At first, I estimated the crowd at 5000, from what I could see. But a PKR activist said that all sides of the expo site were filled with people and the turnout was much bigger than during the Bersih 2.0 roadshow last year. That was evidently true as I made my way out of the event. Cars were double- and even triple-parked along the road outside the grounds and even on the highway flyover facing the site, reducing traffic to a crawl.

If the Chinese and the Indians refuse to vote for
lackey parties like MCA, Gerakan, MIC etc anymore,
UMNO will not be able to rule multiethnic Malaysia.
Remember that at least 50% of Malays are ALREADY supporting Pakatan Rakyat.

Chinese and Indians who vote for increasingly fascist UMNO and the other lackey BN parties are voting for continuation of their own oppression and subordination as second class citizens of institutional racist, semi-apartheid Malaysia.

The Chinese in Johor are moving the support away from BN.

no wonder MB Ghani is now busy courting Chinese with many visits to non-Malay areas in Johor.

Its to be expected. Everyone loves a winner. I am more interested to know what Anwar is talking about. Enough about the case. It should NOT have pre-occupied us and THAT is the real wrong of UMNO/BN with this case. UMNO/BN have so much to do and yet so much was wasted on such a silly thing as Anwar’s personal life instead of the issues. The latest survey shows that Perninsula Malaysia is majority in PR column but heartland Malay voters and Sabah & Sarawak stand in the way. Particularly Sabah & Sarawak – change is within their grasp now… Read more »

Every other Indian fears the other Indian voter who can be bought over with a packet of Briyani, white shirt & “veeshti” and RM10. They feel this group can be easily bought over by MIC, and upset the apple cart for PR in marginal seats.
No difference from what we see in Kollywood movies.

SamG
You must get these Indians to watch the movie Sivaji The Boss (starring Rajanikanth).
They can then identify with the culprits in barang naik regime exploiting the ignorant folks !

And the 10,000 who attended are just the beginning in a show of force and support for the good governance of Pakatan Rakyat and YAB Lim Guan Eng. Just imagine, mainly Chinese speakers speaking to a hugely Malay crowd! Even Zahrain, Zulkifli, cannot do that! Forget about the non Malay leaders of component Barisan parties, like MIC/MCA/GELAKAN! Can Chua Soi Lek or Koh Tsu Koon do that? Can Ezam do that? It just goes to show that if you practise good governance, the rakyat regardless of race will support you and in DAP led Pakatan State, Penang, we all can… Read more »

Let’s all look forward to a new Malaysia where all races can co-exist in harmony like brothers and sisters as in the past. God knows that our nation has been plundered, bullied and nearly destroyed by a bunch of greedy and power crazy warlords and bigots. Time we take it back and start all over again. Let Pakatan be warned that Malaysians will elect them with a caveat; take care of the nation and it’s people or we will get rid of you too.

ya, this is my dream for Malaysia that the Malays, Chinese and Indians, etc can live up the spirit of BERSIH !!!

Hope and pray that UMNO/MIC/MCA cant divide the Rakyat anymore.

slm reformasi to u all.

yup i totally agreed wth both of u…i really want us live together here more peacefully..trust each other more…without doubts wthin each other n mke our country more develop n more strength compare our neighbours…
the most important thing s we should live n undrstand more each other…undrstand each othr culture n believes…let us build the new Malaysia together to make us moving frward compare to othrs

Very promising. Note that this area also covers SPU where BN-UMNO have a few seats. If these votes swing then a few more seats in the SPU area could fall to PR. This is Malay heartland in Seberang.