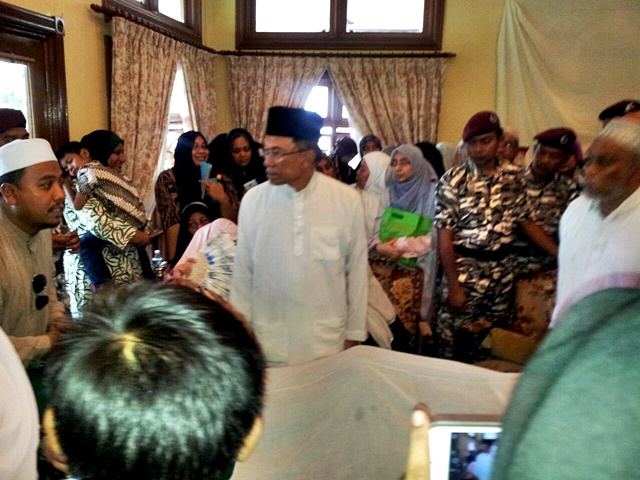 Anwar Ibrahim was allowed to pay his respects to his late father Datuk Ibrahim Abd Rahman at the latters’ home in Kajang. Anwar arrived in a prison car, a black Toyota Fortuner, just after Mahathir had left the house.

Earlier Mahathir and Siti Hasmah arrived to pay their respects. 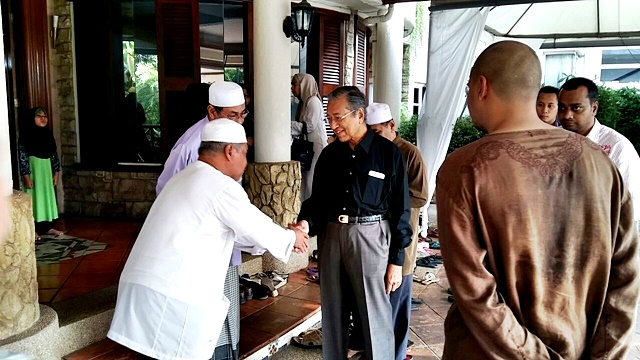 “Many of those who attended the funeral saw Anwar as a victim. They met Anwar and shook hands, and through their body language, I knew they sympathised with him, especially (those from) Umno,” said the eye-witness. “Umno knows their slim 48 per cent support wil reduce come the 14th general election.”

“The spirit of Pakatan seemed to be rejuvenated when the DAP, PKR and Pas sat together.”

Interesting comment by Kim Quek that should open further discussion on this blog on the topic of gerrymandering: When BN suffered unprecedented loss of Malay votes and equally unprecedented gain of Chinese votes in the 1999 election following the sacking of then deputy premier Anwar Ibrahim, the EC skewed the electoral rolls to maximise the creation of racially-mixed seats. Now, after BN suffering massive swing of Chinese votes to Pakatan Rakyat in the past two elections, EC is (allegedly) skewing the electoral rolls in the opposite direction – maximising the creation of Malay-dominated seats. This is done through a two-prong… Read more »

Can the EC deny anyone from registering as or being assisted to register a voter? Shouldn’t police reports be lodged for the alleged cases?

Helmi, such collaboration is not impossible. In politics there is no long term enemies or friends!

Haha funny. Someone complained about the red. Now is this BN blue or PKR blue 🙂

Anil is attempting a blue ocean strategy?
Let’s hope Anil can be bolder in his assessment of local politics.

Black or White no grey matter is best. 🙂

POTAtoes the dish of the day for Malaysian !

I hope this blog can continue to feature the feud between Mahathir and Najib, and gives us analysis on the feud.

Any comment on Najib’s “answers” to Tun M’s allegations on TV3’s Soal Jawab?

Could Mahathir be trying to collaborate with DSAI’s camp to (defeat the) Najib regime?