At long last, 10 years to the day after he first became prime minister, Najib appeared in court for what promises to be a long drawn out legal battle on multiple charges. A bit of drama outside the courtroom as well. And listen to those chants of Malu apakah, Bossku?!” (shakes my head in disbelief)

The Suhakam findings thia morning were disturbing, pinning the responsibility on Raymond Koh’s and Amri Che Mat’s enforced disappearances on the Special Branch. But it is still some way before the families can get some closure.

Check out the Aliran statement in response. We never again want to witness anymore enforced disappearances.

And over in Penang, we have the peculiar case of a businessman claiming trial on charges of deceving a managing director to pay him RM19m to help “settle” an MACC probe on Penang tunnel builder Constortium Zenith Construction Sdn Bhd.

So keep an eye on developments on these three fronts. It promises to be riveting.

READ MORE:  Three reasons why Tommy Thomas would be an excellent choice for attorney general 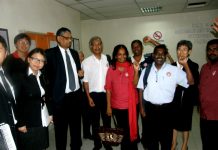 Jibbie order malu Malaysia.
Make sure our hawkers don’t malu losing out to efforts by Singapore to promote hawker culture as their own way ahead of Malaysia

Singapore food culture is hawkers centralize in food courts all over island.
Penang ones mobilized on the streets and food courts in air con malls.

Did PM see the in broad daylight abduction videos, esp the gold Vios vehicle at 2 abduction scenes? How could he asked for more evidences & not rely on hearsay, which the videos speak volume? Get the Interpol to investigate.

The current government should uncover the truth since atheists previous regime denied their involvement!

Also get Interpol to locate the missing daughter of Indira Gandhi.
https://www.thestar.com.my/news/nation/2019/04/10/ph-failed-to-keep-its-pledge/

Thief is worshipped as Boss.
Something is really wrong!

Unfortunately, the Malay feudal mindset or more accurately, the … naivety [of some], only perpetuates or even worsens the situation. Their devotion is not focused on royalty alone, they appear to have an inexplicable undying love affair with crooks, thieves, rascals and assorted anti-socials. Otherwise, how can we explain [their] loyalty to the very persons who robbed them even as these messiahs proclaim from the ramparts how they would protect race and religion?

Dr M: Let IGP retire before we investigate him for Koh and Amri’s disappearance

IGP may not get to realise his retirement plan of selling durian?

Businessperson in Penang tunnel case faces more charges tomorrow https://www.malaysiakini.com/news/471247 Here’s a prying comment by Keyboardwarrior: 1. Why would a company like Zenith pay 19m to stop investigations, unless there is truth of corrupt practices in the Penang Undersea Tunnel project in the first place? 2. With the charging of this guy, it is clear that Zenith was willing to bribe to stop investigations against it. So will the Penang government now terminate the contract/agreement with Zenith, a company involved in bribery? Will the Penang government follow through with it’s CAT policy??? My Observation: MACC should reopen its investigation on… Read more »

1MDB: The playboys, PMs and partygoers around a global financial scandal
https://www.bbc.com/news/amp/world-asia-46341603

Ref. Suhakam: The issue is not just disappearances but also “encounters” with criminals (that can be avoided), torture, execution (murder) and disposal of remains. Over the years, no opposition politician, NGO, Suhakam, etc. seems to have asked this simple question: Who authorised the setting up of this terrorist squad in violation of every aspect of human decency and justice, at the expense of the same public it endangers.

No one is above the law, said PM Mahathir.
https://www.thestar.com.my/news/nation/2019/04/09/tmj-is-a-regular-citizen-and-not-above-the-law-says-dr-m/

it is a norm in malaysia, plenty of low life creature in this country, stealing politician, NGO
turned politician, politician disguised as NGO,…hehe…malu apa malaysiatu