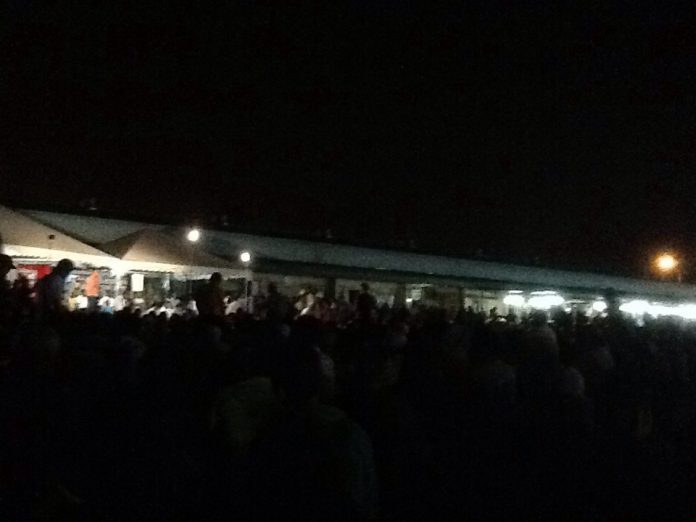 11.25pm – Anwar Ibrahim stresses the importance of fostering respect among the various religions.

He also highlights Karpal’s legal predicament. Pakatan leaders will head to court immediately after nomination to express solidarity with Karpal. Other Pakatan leaders have been hauled to court as well, and he asks Najib to stop this trend.

11.10pm – Anwar says he is heartened by the strong solidarity and words of support by fellow Pakatan leaders which he says augurs well for Pakatan unity.

Anwar says the BN were worried about being thrashed in the Kajang by-election.

He also laments he was heavily criticised by pro-Umno groups for speaking in the Kajang church hall.

11.00pm – Anwar starts off in a quiet measured tone before his voice rises in a crescendo as he rails against how the court dates were hastily brought forward, effectively blocking his Kajang Move.

He asks why Daim has not been questioned about his business deals.

Sabu asks, what has happened to Malaysia’s submarine?

Why has Barang Naik in the country, Sabu poses the question. “Because you asked for it!” he says, by allowing the BN to win. He also accuses Umno of playing up ethnic issues.

10.15pm – The normally soft-spoken Afif is in his element as he touches on the implications of the Anwar verdict. Anwar, he says, could be jailed for five years. He urges Kajang voters to give Wan Azizah a resounding verdict in the 23 March by-election.

9.55pm – The emcee calls for a minute’s silence to pray for the passengers and crew of MH370. He then announces the arrival of Mat Sabu and the Seberang Jaya rep Afif.

Despite the minimal publicity, the crowd has swelled to 2000. As word spreads, more people are arriving.

Why is this case so nauseating? Because a physically fit young man with no signs of mental defects by the name of Saiful Bukhari Azlan could run into the arms of the authorities (both secular and religious) besides that of his father and cried that he had been force into unnatural sex against his will by a frail old man by the name of Anwar Ibrahim. This simple observation seemed to be oblivious to authorities which comprises of the police, AG’s Chamber and even the supposedly wise judges who somehow treated him like a hapless 5-year old rape victim and… Read more »

Now I really don’t like Anwar. The replacement candidate should have been Rafizi or Nurul. Wan Azizah is not really going forward unless Khalid Ibrahim wins the deputy presidentship of PKR and then HE has to sort out the leadership of PKR..

It appears the future of PKR and hence Pakatan rest in Khalid Ibrahim’s hand..

Awang should be explaining why the sodomy case is not fair and a transgression of justice as alleged by many PR supporter. Instead of explaining he just become a blind supporter commenting why BN is scare of DSAI, name calling and so on. Karpal one of the most prominent lawyer could not prove a thing. Anyway they will soon be buddies in jail. Just like bapak borek anak rintik

Where are they soft, uncle? They cannot be soft. How do you know they are soft? Actually, I was also unhappy with the Kajang moves, but, seeing the speed in which they persecuted DSAI, I know immediately something is very wrong, just why are they so scared of Anwar? Just why must they finished off DSAI politically? Something is very wrong, those UMNObaru folks and of course sycophants like Yang, MCA/MIC/GERAKAN, must have something to hide, that is why they are so scared of Anwar. Old man, go to sleep la, it is late, tomorrow you need to work. Do… Read more »

Awang, yang formerly was a staunch supporter of pakatan, he always shredded BN into pieces but since DAP policy to curb the speculation of low cost and medium cost properties his apartment got stuck hence, the wrath against Dap/pakatan now.

Umno was so afraid of anwar becoming MB of selangor…

(He was sentenced to jail) before the nomination day.

Yes, this is very soft of Umno, they didnt kill him off (politically) straight away …

Thanks bro Kee. It had been a long time. I had not seen you commenting for quite sometime, until recently. Keep commenting. Yang is a pain, quite embarassinglah, for an uncle like him to throw tantrums …. He sacrificed everything just because he cannot get what he wants. I have been following Mr. Anil’s blog for years, only did not comment. Anyway, for every supporter like Yang that leaves PR, we have 1,000 joining immediately. Uncle always sides with losers. Do not bother about him, just let him use this place to voice his discontentment. Pity him. Take care Kee… Read more »

The govt is actually very soft. Whenever the opposition win a case, no problem they are happy and say the judges is fair. But when they lose the case, ha they start yelling and shouting blaming the judges is bias. Then come the rally and bad mouthing and start boycotting this and that. My goodness be a sport. If BN MCA, Gerakan UMNO and the coalition is not sporting and partial you would not have won 89 sets and deny the govt 2/3 majority. Be a gentleman please. Don`t be a sore loser.

The people are getting tired of PR antic