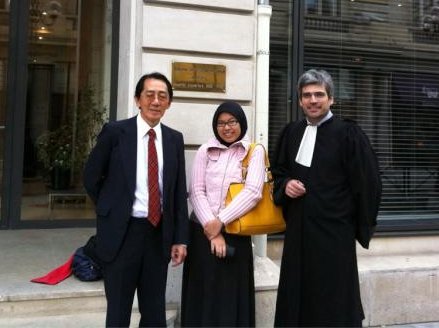 According to Fadiah, the Suaram team confirmed their complaint to Judge de Loire regarding alleged corruption in the purchase of the submarines.

They briefed the judge on the political context of the case.

They also elaborated on how the court in Malaysia in the Altantuya murder trial had not delved into the issue of the ‘commission’ or payment that Altantuya was asking for, the flaws in the case, and how the MACC had apparently failed to address the issue.

The proceedings in Paris are not open to the public, but Fadiah said the plaintiffs are able to brief the public.

Incidentally, Judge Le Loire hit the headlines in 2001 when he issued a summons to former US Secretary of State Henry Kissinger to appear as a witness to answer questions about alleged US involvement in Operation Condor during an investigation into the death and disappearance of five French citizens in Chile, then ruled by General Augusto Pinochet.

The summons was issued by Le Loire at the request of William Bourdon (who happens to be the other lawyer acting for Suaram in the Scorpene inquiry). Le Loire had in 1998 issued an international arrest warrant against Pinochet.

Kissinger was staying at the Ritz Hotel in Paris when he was served the summons. He bolted from Paris the same day.

President Nicholas Sarkozy himself has been implicated in other shady DCN-related arms deals. So Najib will be more worried if Francois Hollande is elected teh new President of France?

That is why it is reported on The Sun today that Malaysia plan to buy more submarines?

I think about time for Finas to explore such paranormal theme since the local movie producers are already dead on creativity. Currently there is this Thai horror movie about the spirits in a commercial jet plane. Finas can use the Melaka submarine for location shooting to save cost and help the Melaka Governement to raise some fund to ease its debt situation. Imagine the story of a Mongolian spirit in the submarine – sure meletup on local box-office. David Teo please get the movie rights fst before KRU gets it as KRU has the special effect studio to show in… Read more »

Such movie will finally get Malaysian worldwide attention for oscar nomination.

The killer will now know, the Monglians are fighters, even after death, they will keep fighting till they get the culprit…

Sometimes we think we can always get away with things… nah ! definitely not this time ya?

I will not be surprise if the killer suddenly drop dead…

P/s Mr Anil, i didnt mention any name ya? TQ!

And this song by a beautiful Mongolian songbird dedicated to Altan’s eternal happiness & passage to Heaven:
天路 索朗旺姆 (A Road in Heaven)

I heard they say (someone) is now wearing pampers because … Altantuya is everywhere now !!!

Anil, nothing to delete right? TQ!

Besides dubious submarines, Najib has hammered in a slew of mega-deals that pundits say were obviously over-priced and aimed to help Umno-BN and its cronies cash out. Recent examples include a RM7.1 billion 60-year toll road concession and the sale of Maju Expressway for RM1.5bil, reaping its owner an RM1.2 bil profit as the majority of the costs were financed from government grants.

Flip-flop Najib going the same downward path as Badawi ? One day the PM shouts to his UMNO members that they will guard Putrajaya even if it has to be over crushed bones and bloodied bodies. Then another day he says BN apologizes for its past mistakes. What kind of trade-off politicking is this? If only the two prime ministers – Pak Lah and Najib had abandoned the ‘Mahathiristic’ mantra of divide and rule, threaten and conquer, fabricate lies and banish opponents, today BN can sail to yet another victorious mandate. But knowing full well the price that will have… Read more »

Altantunya died in M’sia, kick-back alleged on m’sian, trial concluded in Malaysian court. Unfortunately many M’sian (me included) put high expectation on French judiciary to reveal some truth about what actually happened in my homeland then. Yet, we still celebrating 55 yrs of merdeka this Aug for whatever reasons it justified.

Mr powerfull’s palm is big enough to cover the sky of m’sia, however big and fat the palm Malaysian allowed it to grow over the sky, it will not reach France. Let’s wait for the sunshine of Paris, see if they glow differently.

Let this yellow submarine case surface with the truths and not be hidden under the deep blue sea of untruths.
Not even the Blue Ocean Strategy of misinformation can perpetually render this case to RIP like the ‘Titanic’ of glaring greed, murder & corruption.

This is the grand standing that will torpedo any effort to find or prosecute corrupt acts or practices by Malaysian politicians as alleged. To have gone to a sitting judge sitting in a matter that is not yet complete is to compromise the integrity of the court and the tribunal. The audacity of ignorance of Suaram director Dr Kua Kia Soong, Malaysian lawyer Fadiah Nadwa and lawyer Joseph Breham is only matched and dwarfed by their ignorance. The tribunal is now tainted for the judge (if as reported is true) entertained the complaints and reports by these individuals outside of… Read more »

Gopal Raj Kumar
The truths hurt the die-hards who swim in the blue ocean not knowing that the yellow submarines gonna torpedo (more explosive than C4 or C5 grade) the skeletons in the closets to bring nothing but the holy truth to the rural folks ????

Is that meant to be your erudite argument? it is “the low spark of high heeled boys” like you that make it difficult to prosecute anything with your rants and raves of such low quality demonstrating an even lower intellect.

Shahrizat’s hubby & sons have been buying the properties using NFC monies and subsequently renting them out to the National Feedlot Corporation (NFCorp), which operates the NFC, and earning high monthly rentals from the firm. Going by the NFCorp’s financial statements, the father-and-son team has been reaping over 72 per cent in profits by (allegedly) charging exorbitant rentals to the company, in which the former is chief executive.

This is a case of ‘rakyat dilembukan’ Umno!

Gopal, i like you – ignorant and innocent, so pure, so untainted… surely heaven belongs to you !!!

However, surely, some people will think otherwise and call you the biggest idiot !!!

for the information of those innocent folks (per Kee’s words) — Scorpene alleged kickback probe calling Razak Baginda as witness – for more info read :

On Dr Kua, probably i can recommend you to read his book called “Questioning Arms Spending in Malaysia: From Altantuya to Zikorsky”.

Many loose their “innocence” and get enlightened reading it.

O! i forgot to add in – another meaning for innocent is BODOH la !!!

The French and Chinese must be your favorite people at the moment. Wonder what Rusell Peters might make of you.

Gopal should not use his blind loyalty to blunt his judgement.