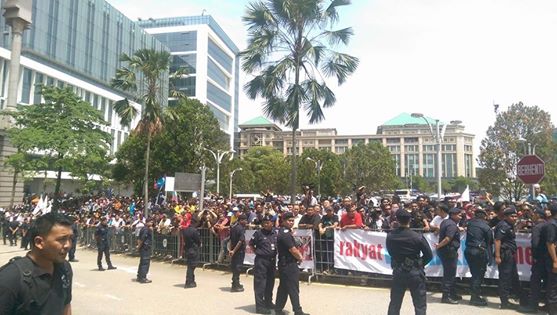 A large crowd gathered outside the Palace of Justice in Putrajaya.

The social reform group Aliran has released a scathing immediate reaction to the verdict in the Anwar trial and the upholding of a five-year jail term.

Check it out here. And check out Anwar’s full response here.

I am shocked at the verdict, and I am not the only one. I have been receiving a steady stream of outrage from other concerned Malaysians via text, email, Whatapp, social media and blog comments.

This decision is not going to help improve the administration’s image – already tarnished by rampant corruption and cronyism – in the eyes of Malaysians and the international community. (It is already the top story in the global media.)

Instead, the outcome will transform Anwar once again into an icon for the reform movement.

SODOMY2 – I will not be silent and will fight for freedom and justice and will never surrender. – Anwar Ibrahim at sentencing hearing.

SODOMY2 – I will again for the third time walk into prison but with my head held high. – Anwar Ibrahim at sentencing hearing.

If any group harbours hope that the incarceration of Anwar Ibrahim will put a lid on the quest for reforms in Malaysia, they would be sadly mistaken. The movement is not just about Anwar. It is larger than that. And it is time for other Malaysians to be empowered in the journey towards a more just Malaysia.

Anwar’s jailing will only redouble the commitment of many Malaysians to work for substantive and real change. Many other Malaysians will step forward and be counted.

Can the government explain how the PMO was able to issue a statement within minutes of the Chief Justice Tun Arifin Zakaria’s announcement and even before the sentencing, stating that “exhaustive and comprehensive due process… is now complete” when in fact it had not?

Trust deficit is what Najib needs to improve besides fiscal deficit otherwise Be End next.

Saiful has credibility because he sumpah in masjid?

Saiful is a state witness, no crime even if he consented to sodomy?

Najib swore too under the Koran that he did not know Altantuya but the Singapore government reportedly (allegedly) knew that Najib, Baginda and the Mongolian model were (allegedly) in Singapore having a good time ( closed circuit TV in the hotel ).

Do you have the link to that report?

There is a lot of evil in 1Malaysia today.

The decent majority of Malaysians of all ethnic and religious groups
must strengthen our resolve to bring about positive change all the way to GE14 and beyond.
DSAI will be our Nelson Mandela – a symbol of hope, struggle and ultimate victory

The Prime Minister’s Office’s (PMO) was quick released the statement to Anwar Ibrahim’s guilty verdict even before sentencing.

Did PMO know the decision beforehand?”
Did PMO prepare a press statement beforehand?