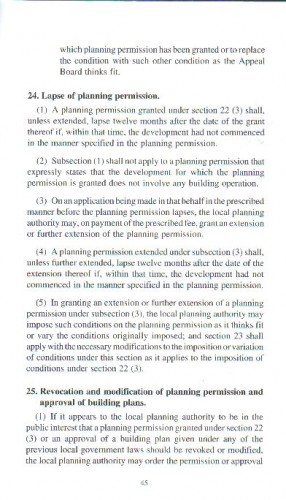 Now here’s another worrying development. The Penang government has implemented a “build first, approve building plans later” policy in a bid to draw more investors to the state, according to a news report. 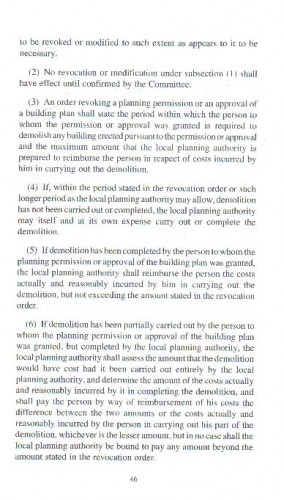 Since the Penang state government is so afraid of exposing the state to claims of compensation, then it should chew on these provisions from the Town and Country Planning Act 1976. Provisions under the Act state that the authorities will be exposing themselves to compensation claims for revoking permission or ordering a demolition if requirements are not met.

Section 25 (7) states that if planning permission or approval of a buidling plan is revoked, and if the person claims compensation from the local authority for expenses incurred, the planning authority shall offer compensation that is adequate.

Another section says the developer can appeal to the Appeals Board to assess the amount of reimbursement or compensation to be paid.

I have a better idea: why not go the distance and do away with all requirements. No need for planning permissions, building plan submissions, engineering department approval, PBA approval, bomba approval, EIAs, OCs, licences – oh, what a hassle! – then sit back and we will see a terrific influx of foreign investors into Penang. Only thing is we will probably succeed in drawing the worst kind of investors: those with little regard for regulatory requirements, safety, the environment – in short, those investors who are unable or unwilling to comply with the minimum standards and requirements set by developed nations. Hey, come to Penang, you don’t need to worry about all these things.

If the Penang government wants to speed up the building plans application process, the answer lies not in allowing the investors to build first and approve building plans later, but to improve the efficiency of the various departments in processing the building plans – without compromising standards and requirements, which are there for very good reasons.

This excerpt from Malaysiakini:

Penang has implemented a new ‘build first, approve later’ policy to expedite construction of factories in its industrial zones.

This is part of the incentives to boost industrial growth and expand employment opportunities across the state.

Under this policy, local authorities will relax red tapes and allow investors – locals and foreigners – to build factories while their building plans are being processed.

lim guan engThis will cut time and costs for investors – therefore increasing Penang’s attractiveness – according to Chief Minister Lim Guan Eng. The leader believes investments will increase jobs, which will be a boon for the state.

Lim understands that this policy which is restricted for industrial premises will face objections from citizen interests groups – since factory buildings have to comply with guidelines and specifications stipulated by local authorities in order to obtain occupational certificates (OC).

The chief minister assured that while the OC and approval will come later, the investors still have to submit their project plans and receive initial consent from local councils. Construction can only commence after this.

“Of course investors must comply with the rules and regulations. Otherwise local municipalities will reject their building plans eventually and will not issue OCs.

“Construction of their factories definitely must meet local building guidelines and specifications,” he told newsmen during a press announcement by new American investor National Instruments (Nati) in George Town.

Yes, the sad birth of a monster that will stamp its feet and rock the island

I am not from the building industry but I know of an electrical engineer who cheats on specifications for high rise buildings in KL.

I am wondering if people know if this is a common practice? Or is this an isolated case? Thank you.

Hello… you guys seem to forget la… there is one fundamental difference between “progressive countries” and … ahem… APA PUN BOLIH Malaysia!

Malu… I want to state the obvious here!

Anyway, Anil, the provisions under the law that you cite, do not prescribe any compensation for the theoretical demolition you describe, not when requirements had not been met, or the works had not been in accordance with by-laws. Compensation would be required if approval is given and then revoked due to no fault of the proprietor.

Anil, looking at some of the comments, especially posted by [arkitekt on November 6th, 2008 at 4.21am] and [omo on November 5th, 2008 at 5.29pm], maybe you should do a bit of research and come back to update this post. Journalism is not just about writing and reporting good and bad, I believe it also involves doing a lot of research on the background and related stuffs of any news and include that in your repoting. In other words, educate the readers. Yes, you have the freedom to speak up, but you also have the responsibility to present the other… Read more »

The concept is not as scary as you might believe. Many progressive countries practise this in essence. Planning Approval or Development Order would still be a necessity. There needs to be massive streamlining of this and the latter process of Building Plan Approval. In Penang, there are so many overlaps of the approval process, it takes AGES for plans to be considered and approved, years! Technicians and bureaucrats impose ridiculous requirements [don’t think they are necessarily for a better or safer building!] when all that’s needed is for an intelligent set of rules and guidelines to be effected, which the… Read more »

Currently, the best way is what Anil has mentioned: making the process faster, cutting red tape… I think one of the things LGE can do is to ask shorten the tea breaks for those approves :-). Seriously, the civil service is inherently inefficient. It needs to be run like a private company (but serving public interests), something like Singapore. Incompetent people will have to leave. You can’t let big companies have such an advantage all because ‘they create jobs’. Having said that, if you place ~RM20 million to build a building, would you dare risk having it not approved? ———————————-… Read more »

Folks….I think I am getting very sick with Anil’s comments. I use to see him objectively but I think it has come to a point where I see Anil’s comments so plainly low. Look it this way – if one can’t be accountable with one’s professional point of view …. don’t be an architect. This practise is being followed in Spore, Thailand. When LGE doesnt’ do anything, he is seen as weak. My vote stays the same. I guess BN never had the b…. to do anything. B…. to even stand up against PGCC. Anil stood up against it. …… Read more »

>>surely the architect who designs the building will follow all the malaysia by-laws. unless the architect is a non-integrity, amateur professional. so, who do you wanna believe? the authority or the professional?<< The question is not about whom we believe, but with whom does the buck stop? If the architect is truly answerable for shoddy buildings, then so be it. Ditto for the local councils. The apartment collapse in KL was an eye-opener. What have we learnt from that episode vis-a-vis integrity of buildings, its surroundings and overall safety? Who was ultimately held resposible? It was horrible how the authorities… Read more »

LGE,u also use ISA ah,*ikut suka aku* we Penangites are not desperate to the stages of employment opportunities which have the side effects and unsustainable.

I believe even though with this new system adopted by the penang state government, i am sure there is a mechanism to monitor the building progress so that it does not flout any law. Come on , the DAP government is not as tidak apa as BN government ok Anil, whereby illegal(?) extensions can be built just like at UMNO Tanjung office.

Guys You are all behind time. In Down Under, you have just to submit – Development Approval plan – ie the concept plan. The only thing is that they are posted up so that for any objections. Building Plans which are detail plans by architects and engineers comes in later and now the responsibility is to be taken over by certifiers which is equivalent to REgistered architects and professional engineers who are like Doctors registered with the board. Imagine – in malaysia, who check the building plans? The college trained technicians are checking work done by University trained architects and… Read more »

surely the architect who designs the building will follow all the malaysia by-laws. unless the architect is a non-integrity, amateur professional.

so, who do you wanna believe? the authority or the professional?

Beyond the issue of buildings, I am very concerned that the CM of Penang is bringing in investments that are detrimental to the state in the long run. There are many international organisations and corporations with bad technology and experimental processes and products which are scouting for the wet behind the ears political leaders and the greedy commission brokers who has the ear of these leaders. Leaders who are desperate and careless will prostitute their lands and their people. Africans states which are rampant with weird and new diseases is classic afters years of accepting and being trialed upon by… Read more »

I think they have created a monster. How can you build without approval first? Knowing Malaysians mentality, cutting corners will be the order of the day. Safety procedures and building by-laws will be ignored. How do you check on structural integrity for example once cement are poured and under designed steel structures covered up? It would make more sense if the approval process be speeded up rather that taking short-cuts as they plan to do. Create a one-stop approval process so that architects and engineers don’t have to go around in circle. Place a time-frame for approval to be given.… Read more »

Why not reject every single idea from government then?

anil,
LGE means pushing the Architect and the engineer to take responsibility. It is high time the red tape has to be reduced or cut inorder to move forward.

I agree with Anil’s suggestion that LGE should clean up the approvals department to decide on plans quickly rather than build while waiting for approval.

I realise that a cleanup takes longer but I am sure he would not like buildings collapsing all over Penang just before GE13.

So we will have more buildings collapse on us everyday!
Personaly, I don’t think it is a good idea to do so, even now there are properly planned and approved buildings collapsing, this is a no brainer.