Following the government’s eyebrow-raising decision to award YTL Corp a contract for internet services, learning programmes and the supply of Chromebooks to school pupils, we might be curious to know who exactly owns the firm.

The company says it was awarded the contract via open tender.

Deputy Finance Minister Ahmad Maslan’s claim that it is cheaper to supply Chromebooks to a class than to build a computer lab does not make sense to me. Why not get the Chromebooks directly from the suppliers? Moreover, a computer lab can be shared among many more students.

The Mahathir administration unfortunately privatised electricity generation. It granted YTL the first independent power producer licence in 1993, under the first generation of lucrative concessions. The EPF subscribed to the bond issue as part of the financing for the project.

So who owns YTL? We can only go by available official records, for what it is worth; so here goes.

These are the substantial shareholders of YT Corp on 28 September 2012:

These are the top ten shareholders. You can see a number of shareholdings held via nominees. 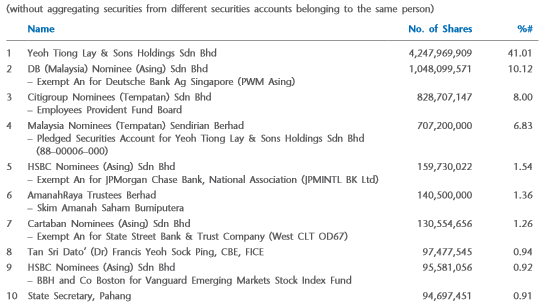 And these are the shareholdings of Yeoh Tiong Lay and Sons Holdings Sdn Bhd, the largest shareholder in YTL Corp. 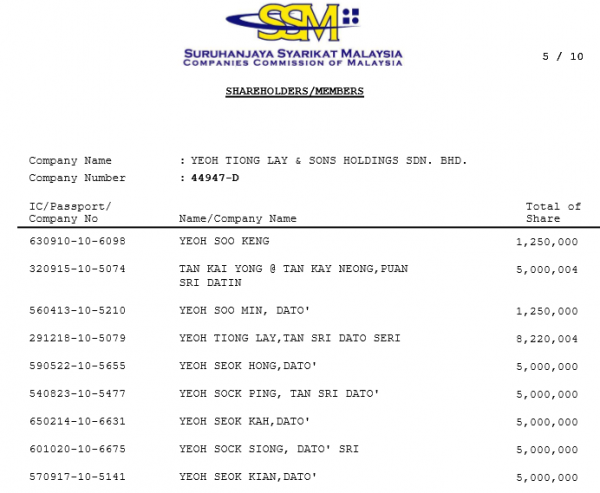 Deputy Education Minister Kamalanathan has been criticised for defending the government’s purchase of Chromebooks from YTL without proper tender.

So, why do the Rakyat continue to vote for this sort of governance? Or did they?

We can never trust the ‘offer’ from the local Telcos.
Recently my son took up the ‘7 Day Internet Offer’ from Digi without realising that its ‘terms & conditions’ would tie you up to continue with the service at higher cost after the 7 day period!

they alike gov crony companies which sponsores most the gov leader on their bow tie party at KLCC philharmonic orchestra ballroom..

I am sorry and sincerely apologize to you Mr.Anil.You did publish.

rajraman.You are a real gentleman and i feel very bad to accused you before read all comments.Whenever you come to KL please call me.

No worries, Raj. Don’t worry about it. Good to have you back.

Anil,
I thought you are a principle man and you exposed most of the wrong doing of Politician and big cronies who cheat the public.

rajraman.but i reserve the rights to criticise you now,You also choose to delete my comment when it’s comes to your friend and online media because you have personal interest in both parties which i whack.

Disappointed in you.Can you explain which part i am wrong?

Nothing personal, Raj. Comments are usually moderated based on the comment guidelines.

There are many internet providers but there seems to be a collusion among these players to set the internet charges high as there is no competition to benefit the consumers. These Telco companies often have mindless ‘promotions’ to trick consumers into paying more. They do not reward loyal customers with meaningful rebates. Customers are tied to long-term contracts only to realise the diminishing internet access speed by the third month.

I doubt the government is looking into it as the situation benefits the cronies.

Perhaps such issue is too ‘high tech’ for CAP to make noise?

The Chinese and many Chinese businessman are mere proxy for UMNO. UMNO so stupid they outsource everything …

You see Anil,the icon change again.That’s posting and this posting link from Malaysiakini – the tabloid online news.You know why call them tabloid because when a mentally retarded woman blog can post comment at your whims without moderation and without email.they just ignore me.

rajraman.I sms you regarding this mentally retarded woman blog but one sms to you i believe triggered to 6 sms.I have to pay 6 sms charges for 1 sms.My eye is very sharp when things goes wrong.

Maybe YSL might be awarded a contract to supply handbags and perfumes for graduation nights.

And whilst we are on the subject of perfumes, do you know why the French make the best perfume? During the aristocratic era, only poor people bathed because they couldn’t afford to buy perfume. It’s also why it’s called eau de toilette which is water of toilet….

tunglang
Reply to  Andrew I

Didn’t the French started with the concept of testing ‘parfum’ on the arm pit by specialist arm pit ‘breather’? No wonder the Frenchmen have extra large prominent noses like Mr Bean’s!!!

Pak Tim
Reply to  Andrew I

Mr Bean is not French.

One of m kutty biggest crony

How about the award of a RM1 billion (US$314 million) commuter railway project in the massive government-backed Iskandar in Johor to Metropolitan Commuter Network Sdn Bhd, a 60:40 joint venture between Malaysian Steel Works Sdn Bhd and KUB Malaysia Bhd, both of which are linked to Umno, to build and operate a 100km inter-city rail service in Johor?

Where is the transparency or open tender?