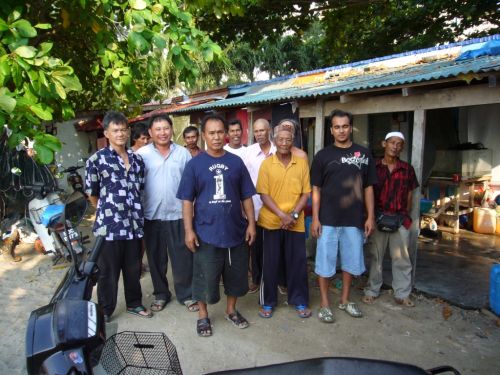 When the tsunami slammed into our shores, claiming scores of victims, many Malaysians donated generously in cash and in kind. But, four years later, a dozen fisherfolk in Tanjong Bunga, living in a “temporary” longhouse, are still waiting for alternative housing. Where has all the tsunami money gone, they wonder. 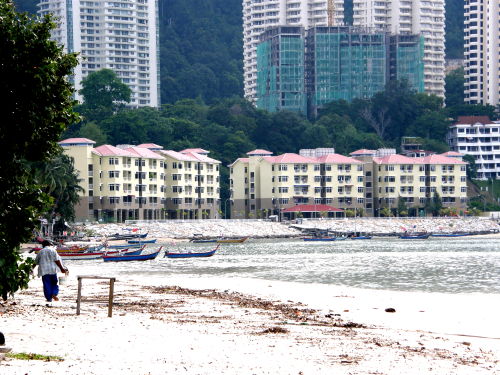 The new low-cost flats as seen from the “temporary” longhouse. They are five-storeys high – so no lifts are included

When they saw new tsunami low-cost flats being constructed on the site of their old fishing village, their hopes were raised – only to be dashed, when occupants of two other tsunami longhouses closer to the fishing village site were allocated the flats. To rub salt into their wounds, about 30 of the 100 flats were allocated to people from outside the village, including absentee landlords of houses in the old fishing village and their tenants, according to the fisherfolk. About 10 of the fishermen, however, managed to get these flats. 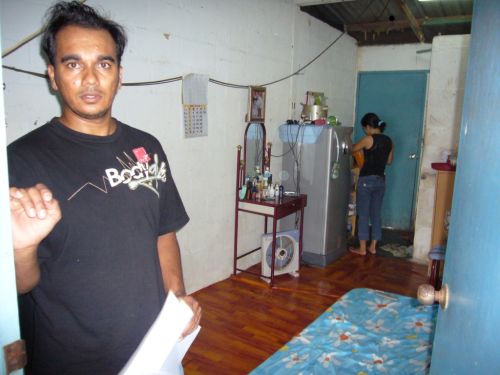 Faizal showing me the inside of his tiny longhouse home

This is Faizal Mhd Yusuff, one of the tsunami fisherfolk. Faizal actually had a decent home near the site of the Floating Mosque before it was built. But when construction of the mosque began he had to move to a temporary longhouse, and when the tsunami struck, he and some of his fellow fisherfolk moved to the present “temporary” longhouse on the beach near the Tanjung Bunga police station. Each home measured 12′ x 10′ (later extended to 18′ x 10′) and the living room, kitchen and bedroom all occupy the same space. “Is this any way for a family to live?” he asked.

Faizal whipped out a couple of sheets of paper containing a list of 16 names of those who had been allocated the new tsunami low-cost flats. “They don’t deserve to be in those new flats; some of them are outsiders,” he said, hinting that a few of them could have got these flats because of their Umno connections or affiliation. “What about us? We are the real tsunami victims.”

The enterprising Faizal has sent out many letters and reports highlighting their plight. You name it, he has written to them: the previous chief minister, the police, the Public Complaints Bureau, Suhakam, the land office.

Many of these fisherfolk used to vote for the ruling coalition before. But on 8 March 2008, feeling betrayed and cheated, they voted for the opposition. DAP rocket flags can be seen near their longhouse including a flag, stuck to a fishing sampan in the sea, fluttering in the evening breeze. 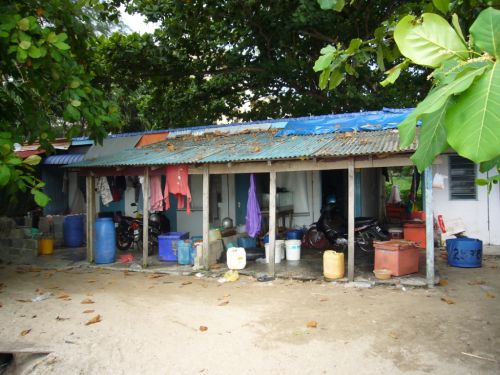 The new DAP rep for the area has visited them, but so far there has been no further news.

Unlike their old fishing village which lies in a sheltered cove, the present longhouse faces the open sea. Their worst fears materialised when strong waves gushed into their long-house on a couple of occasions, damaging their boats and household possessions once again.

The fisherfolk have another great fear: the Penang Outer Ring Road (Porr). They are worried sick that any land reclamation work for Porr near their fishing waters might severely jeopardise their catch – and their livelihoods. “I hear the project is still on and the land reclamation work will create a few new islands near here,” said a worried fisherman. “Have you heard anything about it?”

I tried to reassure him that the project had been called off – but now I hear certain politicians still talking about Porr.

The Penang state government should remember that many among these fisherfolk voted for the new DAP-PKR government; you could say these tsunami victims contributed to the 8 March political tsunami. But now they risk losing everything as a result of this ill-conceived highway project, which their new state government, like the previous administration, seems intent on pushing through.

“Line down” – so no subsidised petrol

That’s not all. The petrol price hike has hit them badly. They use petrol for their sampans but ever since the price hike, they are hurting as fuel costs have shot up from RM40-50 daily to RM60-70.

Incidentally, the fisherfolk are not benefiting from higher fish prices. For instance, they sell ikan kembong to the wholesalers at RM1.50 – Faizal sells his fish by the roadside directly to customers at a slightly higher price – but the same fish is sold by traders in the market for RM4-5.

Look at the shabby way we – and the various authorities and those in power – have neglected these fisherfolk. They are not only tsunami victims. They are suppliers of our precious fish. We should be doing all we can to support these forgotten fisherfolk and to improve our self-sufficiency in food if we are serious about curbing rising food prices.

But all we do is grumble about higher fish prices – and wonder what has gone wrong.

probably end up somewhere where it shouldnt be. remember in one of the northern states, the money was used to refurbish me big shot residence. there were hue and cry but mainstream papers were told to shut up.
thats BN for you. CORRUPT TO THE CORE.

Tsunami Money Gome? Wrongful “gift” of flats to non- fisherfolk of Tanjung Bungah? – Obviously the dastardly deeds of bloody blood sucking, ketuanan types…. Obviously they believe that there are Malays and THERE ARE MALAY TUANS ! All these and many other complains (suggest) CORRUPTION ! CORRUPTION ! CORRUPTION! Pakatan Rakyat should help the badly hit Fishermen to file complaints to ACA. And dear ACA, do not forget that you are CIVIL SERVANTS – employed and paid by the taxes of the Rakyat. The BN government are not your bosse, the Rakyat are. Do Your Duty PROFESSIONALLY. Where the BN… Read more »

the new pakatan rakyat govt should start an investigation on where the tsunami funds went and how it was disbursed, I garantee you it was abused, wanna bet? so what say you jeff ooi and lim guan eng will you investigate, and please for god’s sake help these people.

This is too much! On 26th. December 4 years ago, when Penang was hit by a tsunami I happen to visit Penang for a holiday. I put up in a beach hotel somewhere before Tanjong Bungah bus station. I can hear sirens every now and then. I called reception and was informed that a tsunami had hit Penang 1 hour earlier before I check in. Well, as usual the Malaysian public was pretty generous contributing towards the tsunami fund. From what I gather tens of million ringgit was donated to help the victims. After reading the article by anilnetto, I… Read more »

Am sure Faizal knows most of the fisherfolks in his area. When did the DAP rep visit this community? And if it has been some time then YB LGE should personally look into this. These are supporters of the last GE tsunami and they have been left to rot. YB LGE, get someone accountable and make a study of the new occupants of the new flat that is suppose to house these fisherfolks whose lifelihood has been affected. Am sure not only has the tsunami donations ‘dissappear’ into oblivion but also cronies of the last state government are occupying/renting these… Read more »

rajraman.where is my dream gone anil? thats why i need your support for the poor.Harass Haris ibrahim PP.

A touching tale, Anil. Well done. I remember our previous PM getting all wound up about a scene in the film ‘Entrapment’ showing the Petronas Towers looming above a poorer section of KL, the idea being the filmakers could have shot it from a different angle.

Every year we get some news story offering statistics that show a reduction in our poverty levels. Who was it who said there are lies, damn lies andstatistics…