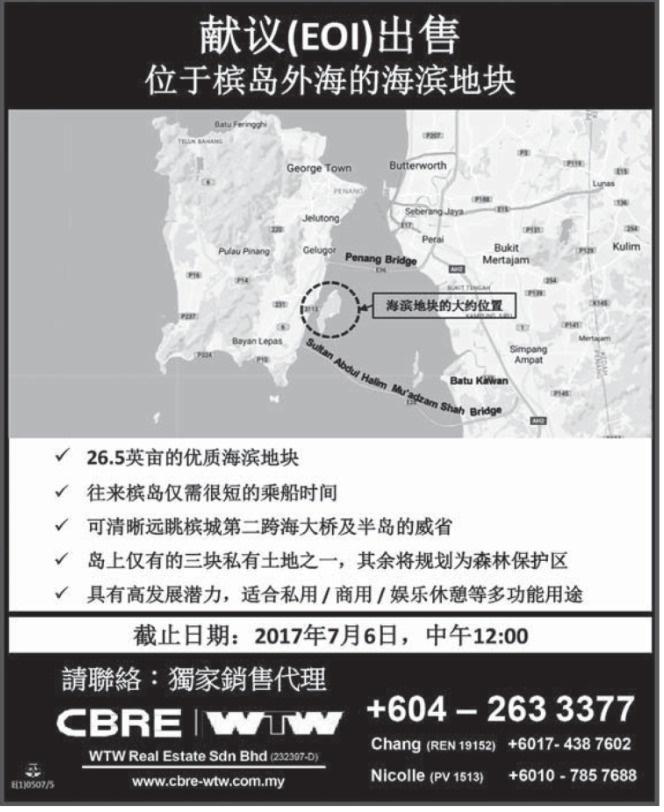 Someone pointed out to me this ad which appeared in a Chinese-language newspaper a couple of days ago.

Expression of Interest (EOI) to sell

If the land has a clear view of the mainland and the second Penang Bridge, it has to be either the East coast or South East coast.

From what I am told, the class of the land in the ad is “industrial”, and it is apparently leasehold land, located somewhere towards the South or South East.

Perhaps the PDC/state government could clarify this latest development. If the land is really for sale, they should consider buying it back.

Last November, the Penang Development Corporation (PDC) announced it sold its 49 per cent stake in Tropical Island Resort Sdn Bhd, which ran a resort at Pulau Jerejak, to Q Islands Development Sdn Bhd, a subsidiary of Ideal Properties Group, for RM156m – netting PDC a surplus of RM140m. QID paid a RM15.6m deposit and is scheduled to settle the remaining sum plus interest over eight years.

Of the 80 acres involved in this deal, plots covering 20 acres lie in the north of the island, the failed resort covers 30 acres along the west coast, and a 30-acre plot lies along the east coast.

The other firm operating on the island is Boustead, which owns a 26-acre shipyard on the eastern coast.

A three-star tourist hotel is one of the five current projects within PRW plan that covers some 53.5 acres (21.6ha) of land sandwiched between the largely untouched Pasir Bogak beach and Sungai Pinang forest reserve.

Unplanned development has robbed Balik Pulau of greenery, says Hilmi Read more at http://www.thestar.com.my/news/nation/2017/06/26/unplanned-development-has-robbed-balik-pulau-of-greenery/#suS0rT3XCig0ohtI.99 This is what we should call: Arrogant CAT regime. In pursuit of money, the CAT gomen is ignoring the destruction of once green-ambient Balik Pulau. Money also can change people – the durian farmers, the estate owners, the fruit orchard owners, the Malay kampung folks – once an offer of unbelievable cash for their lands is wave in front of them. (The PRC Chinese are trying to buy up all of Balik Pulau durian farms) This is one of the ills of unchecked slippery Cosmopolitan Penang… Read more »

Luxury homes glut can wreck the economy http://www.freemalaysiatoday.com/category/nation/2017/06/10/luxury-homes-glut-can-wreck-the-economy/ PETALING JAYA: A property expert has called for the introduction of measures to encourage foreigners to buy up luxury houses in the secondary market, that is, houses that have been completed. In an interview with FMT, Ernest Cheong said such measures were necessary for the prevention of a collapse in the property market, which could in turn ruin banks and trigger a financial crisis. “There are many homes costing above RM1 million which have been completed, whether owned by speculators or unsold, and which the vast majority of locals can’t afford,” he… Read more »

forget about marriot, E&O, Shangri la. let’s have more rumah tumpangan and losman. Have more eating, look tiam and eatery along the roads. restaurants and wedding.dinners in hotels and too niche shopping malls are like luxury homes

Your vocabulary + syntax sound too familiar – to zoro?

The glut of properties being built in Johor has also affected local developers, Petaling Jaya-based Tropicana Corp. is giving a 25% rebate on the list price of homes they are marketing an interest-free, 36-month deferred payment plan. Resale asking prices of properties in Johor have dropped 2% in the past two years, according to real estate listings website PropertyGuru.com.

Country Garden’s projects in Iskandar Malaysia, such as Danga Bay and Forest City, may seem high-density to Singaporeans and Malaysians, but are considered “normal” to Hongkongers and Chinese, who are accustomed to much higher densities in their local property market. The relatively clean air, sea and promise of water views, integrated projects with shopping malls and international schools, relatively low property prices and a well-regarded Chinese developer appear to be a safer bet to these Chinese and Hong Kong buyers compared with Malaysian and Singaporean developers with whom they are unfamiliar. Chinese developers in Iskandar Malaysia also regularly use large… Read more »

The whole thing is again smells very fishy. The speed the Dear Leader has responded and denied shows something is not right. He says it has nothing to do with the state government. Then how come the land can be sold and be used for development? Is it another sweet heart deal where the owner has obtained approval for the land to be used for commercial housing purposes so that they can sell it at an inflated prices?

Anyone can put up adverts just like BN cyber troopers sowing saga seeds all over the place. Troopers have been building patrol crafts for armed forces and was owned by federal GLC.

Pulau Jerejak land sale is only for shipyard, CM tells buyers A plot of private seafront land on Pulau Jerejak, Penang, which is currently up for sale, is only meant for a shipyard, Chief Minister Lim Guan Eng said today. Referring to an advertisement placed in Chinese language daily Kwong Wah Jit Poh, Lim insisted that the proposed sale of the land “has nothing to do with the state government”. Ownership of the 26.5-acre plot had been alienated to Boustead Penang Shipyard Sdn Bhd by the previous BN government, and it has a remaining 25 years’ lease (out of 99… Read more »

Anil, Mayang Mall under major renovation and the Bayan Baru Cyber library there has closed down causing inconvenience to the community especially retirees and school children using the facilities. We seek your advise who we can contact to set up a new library. I am speaking on behalf of many who just want a simple one not a fanciful one like that 24 hour Digital Library. We hope with your contacts you can guide us to solve this problem. Many retiring seniors and young parents are already very upset (sacrifice a library for DAP’s BPO project), and they are very… Read more »

Bayan Baru community now under PKR, just like DAP now losing its principles to care more to Corporate world at the expense of community needs.

We now welcome PCM’s Huan CG to serve the community of Bayan Baru. Are you listening, Huan?

Hi Pushpa sorry to hear about the library. Perhaps you could get in touch with Bayan Baru MP Sim Tze Tzin.

Sorry DAP & PKR, we have heard enough hanky panky from Anilnetto.com to rather trust others for sure $$$ for the public not developers. Money talks these days.

I think you may have forgotten 1MDB.

Huan and Patrick (kaffa) Ooi have to clarify their stands on 1MDB (including the alleged payment handouts scheme banned report in mainstream media including the ever cautious anilnetto.com BUT virally circulated) before Penang voters can trust them.
Ravi could just be momentarily provoked, and when back to his senses would think twice b4 engaging mischievous Huan.
Huan probably MP for Peel District if ever delineanated exclusively for him. Ooi likely focus on Kaffa kopi o to challenge domination of Ali/Ah Huat/Old Town instant kopi local market after GE14.

Don’t Look Back In Anger
(One Love Manchester)

Yoga Penang to be held at Straits Quay this month.
May be next edition can be held at Pulau Jerejak so that people visit the island to clear its negative vibes.

Good ideal but use CAT basher 4wd to ferry passengers to and fro across the island? Penang gomen cannot issue ferry licence. Only tunglang and kalvin PJ can only issue licence….

I hope Wanda Group from China can build a theme park here – good for tourism.

I like your proactive approach although I wouldn’t agree to a theme park. (More to a green or eco-park without commercialism) Proactive unlike some whose comments are loads of spin & shiok sendiri for whatever dedak-ed reason. Btw, I am not a BN fan as some dedak-ed spinners would love to character-assassinate me & others who dare to question the CAT. Neither do I believe in one politician for endless terms. See what happened to our beloved country run by one Dr MadHatter of Helang Island. Btw, one principled & loved politician (for the people) is now a worshipped idol… Read more »

of course not fan but bodek. How many ammo MBs, ministers and even no 1 being sitting more than 2 term? Why deep silence? This means you want PH to have short term but ammo as long as possible.

Now you want chinese developer but strongly reject Malaysians and singland? Now you are developer friendly and deep silence when minister give extension to delay project.

What this former Malaysian diplomat wrote about the rise of China and the fall of Malaysia must be serious food for thought not only by the leaders, but also by ordinary Malaysians, with the questions: 1. Why Malaysians could walk tall all over the world during Mahathir’s premiership but shy to admit they are Malaysians when abroad under Najib’s premiership; and 2. How Malaysians, regardless of race, religion or even politics, can unite to re-set nation-building directions and policies for Malaysians to compete with the rest of the world and not to fight among ourselves to be more divided and… Read more »

Bn has no1,mbs and ministers sitting for few terms and yet dedakCAT is very supportive. When did he complain.in fact he uses his financier words here. Also he complains about singlandbuyers and foreigner buyers. Now he loves chinese to develop a theme park. When is theme park,dedak allow millions to trample the small island with the area botak. Dedak complains about botak.the area for theme park will get botak,.how can one be trusted just like ammo. In fact he is one of the blue. Saga seed

Guessing that developer would develop 50 acres, while selling off the remaining 30?

One Belt one road China may be interested to expand its interest in Penang by having a facility at Jerejak?

There was an article few years back in China’s Global Times that (even) the Chinese govt is showing interest in Penang Island then. But now…no sound already ! Maybe it’s all because of LGE’s arrogant face ? Who knows ? Ambassador 黄惠康 is only closed to the MCA people !?

Same with MDB 1:tell us what sound do you hear ? Sound of silence? Also the high speed rail? Sound of Japanese konichiwa? Or Chinese play out by MCA just play out by ammo?

Good to attract PRC people to Penang for their second home. They will find Penang a nice place to settle down, air quality better.

CAT Basher and Kalvin better go and buy it otherwise the island is only for rich people.