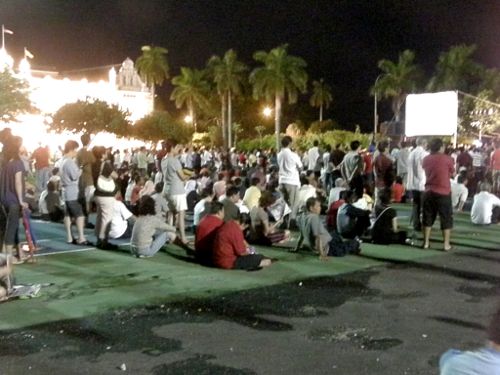 Sitting on a concrete-and-tar tennis court that should have been cleared from the badly scarred Esplanade: A relatively small crowd of 3,000 attended the Pakatan ceramah in Penang last night

Things that could have been done but weren’t:

To Mafrel, I say be responsible, have some integrity! Cakap mesti bikin. It’s a shame – those sitting high-up at Mafrel’s have until now been keeping extremely silent for their failure in submitting Mafrel Report on GE-12 & Permatang Pauh By-Election to SPR/EC. They must no longer continue to behave like a bunch of ‘elitists’ sweeping everything under the carpet and deem answerable to no one. As a matter of fact they do! – they owe it to the general public, the ELECTORATES and dedicated VOLUNTEERS without whom Mafrel won’t be where it is today. Let the general public be… Read more »

Mafrel’s GE13 election monitoring report: It’s been one year already, and Mafrel, the civil society election watchdog, has apparently not yet submitted its report to the Election Commission. This was a watershed election – so what’s delaying the report? Will it be submitted to the Election Commission before the three by-elections in April? It’s the GE 12th Election monitoring report. (Thanks, already corrected – Anil) Mafrel should burn the candles and complete it the next 96 hrs. This so relevant now that the 2 Bukits and the Batang are up for grabs again. The completion of the Report and its… Read more »

After 365days, we still talking about the forms and formats on the Declaration of Assets. Is this government that Rakyat wish to have?

It has only been a year and yes the people has the right to hold PR’s collar and ask them to fulfill their promises but we should also understand that the government service staff is rotten with BN supporters, so how can u aspect PR to work effectively and efficiently with lousy staff. Sacking them is not that easy either because in the end they might face an empty office. who is going to fill it up? Even if filled up with the many jobless people some one has to train them on the system. And all this takes time.… Read more »

It has only been a year and yes the people has the right to hold PR’s collar and ask them to fulfill their promises but we should also understand that the government service staff is rotten with BN supporters, so how can u aspect PR to work effectively and efficiently with lousy staff. Sacking them is not that easy either because in the end they might face an empty office. who is going to fill it up? Even if filled up with the many jobless people some one has to train them on the system. And all this takes time.… Read more »

A BIG NO to local government elections. The most important thing Pakatan should concentrate on is to prepare for the coming 13th General Elections. Everything they do must be geared for that. Being a much much smaller party than BN, they must concentrate all their resources to the few thing that will bring about this victory. Doing local elections will sap their limited resources and energy and weaken them when they face BN later. Do LESS, BUT DO IT EXTREMELY WELL!!!! The most critical thing voters will look at during the 13th General Elections is the Pakatan Rakyat banner or… Read more »

We are talking about a system that had been put and tuned to favoured the bn for the past 50years. We cannot expect PR to change them overnight. Lets get real. We are in for long haul for change. We need the political will and stamina, something all Msians lack. Sigh.

The 8th March 2008 elections offered us an “Alternative to the UMNO/BN Autocratic Government. In 2009, We are ALL Anak Bangsa Malaysia led by our “RPK, Haris & all the Defenders of Truth” to restore “Justice, Equality, Human Rights & Freedom” with our struggles to achieve our…. 2nd Merdeka Independence…. Not from the British Administration, BUT from our own kind (UMNO Baru, MCA & MIC). May I say it again…. Malaysia badly needs “Role Model” established Leaders & Politicians of HONOUR with Calibre, Maturity & Tolerance without Fear or Favour – not “Recycled Politicians”. Further, this nation Desperately needs Intelligent,… Read more »

They are just as poor rich as the average middle to top income rakyat. They got their funds not from corruption. They show effort. They are busy with better things to do for the rakyat that takes time to show results. Declaration can have a dateline like Income Tax must be submitted by end April. Dont’t use that as a benchmark for dissatisfaction but instead to do better. PR leaders not like BN leaders. They know pain and suffering unlike the BN leaders who only know gains and spending it. BN leaders are very much in touch with their supporter… Read more »

It is not difficult to declare one’s asset.
If the former PM of Thailand , Thaksin able to declares his mind boggling billions . I am sure PR states leaders will be able too.
Never mind Thaksin is a Thai.
No need to wait for a proper form or format.
Just do it and dont let us down with empty talks and empty speeches.

Yeah, they should do an asset declaration soonest. Then, the next time another one decides to do a RUNNER, we can do a before and after. Hypothetical scenario:

Erm, nice car you got there. Did you get it from your grandpa or did you strike 3D?

think Perak was the first to implement election for village head. unfortunately, Perak was coup-out by the most unpopular incoming PM in the history of M’sia.

If we have these unfinished businesses, how can we be better than the BN government we want to replace?

The tennis court at Esplanade will always be a reminder of the useless non-performing members of the Penang government, let us see how long they will take to clear it.

PR should understand that nothing short of a fully open to public scrutiny Register of Members’ Interests will do. With respect: If a PR MP is not willing to subscribe to these sorts of acts/conditions and align themselves with these sorts of expected public behaviours and standards, then the honourable thing to do is to resign and go and do something with which they are more comfortable and in tune with. PR will win, or lose, that next general election through such brave, unilateral acts, which are in the end, the really important and inspiring stuff now which the long-disillusioned… Read more »

Declaring personal assets I wonder why PR leaders haven’t done yet Waiting for proper design forms from Bee Anne? I remembered Dr Jeya He declared it It isn’t so difficult to do Why drag it for so long? Promises make must be done PR should initiate its programmes The leaders shouldn’t give excuses 12 months gone losing one state at its end Is this how PR going to tell the people? Set up a monitoring unit Dig up what faults of previous administration Reporting directly to state exco Leaving the administration reviving and building up economy In fact MACC should… Read more »

A roadmap and a timeframe for the restoration of local democracy (local elections) – Pakatan parties want Malaysians to vote them to power. But they have not told us how soon after that they will restore local council elections. Will they also bring back elections to villages…

You mean they have not declared their assets? Maybe they are understaffed….