How did Boustead come into the picture in the Deepak land deal? 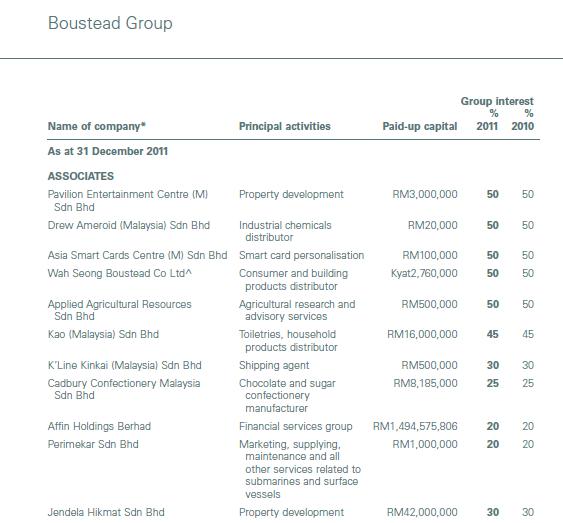 Yes, Perimekar is an associated company of Boustead.

Some of Boustead’s major properties. 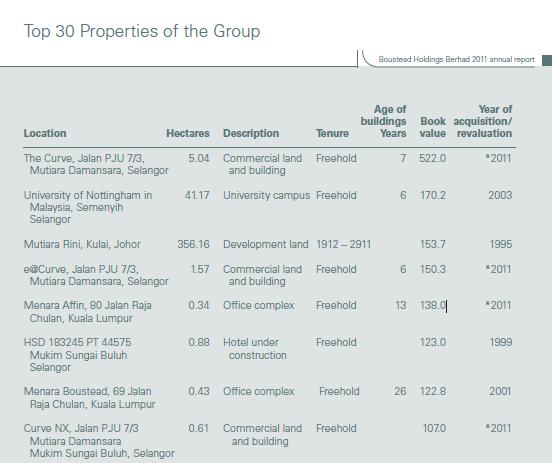 The Curve … remember that venue?

(Incidentally, Lodin Wok Kamaruddin, deputy chairman and group managing director of Boustead, is also appointed by “the Minister” to sit on the Board of Directors of LTAT, where he has been chief executive since 1982.)

So it is not true to say that LTAT and Boustead have nothing to do with each other. In fact, between 18 and 24 December, LTAT bought 2,527,000 shares in Boustead.

(COLLECTIVELY REFERRED TO AS “ACQUISITIONS”)

The Board of Directors of BHB wishes to announce the following:

2. DETAILS OF THE AQUISITIONS

Pursuant to the Share Sale Agreement, Bakti Wira has agreed to purchase a total of 16,000,000 ordinary shares of RM1.00 each in Astacanggih representing 80% of the issued and paid-up share capital of Astacanggih (“Sale Shares”) at the purchase consideration of RM30,000,000 (“Share Purchase Price”) to be paid in cash. The Share Purchase Price was arrived at on a willing-seller & willing-buyer basis. The Sale Shares were purchased from Prestige Dimension Sdn Bhd and other minority shareholders of Astacanggih who are the Vendors in the Acquisition of Shares.

The other shareholder of Astacanggih is Putra Nazrain Adril Bin Abdul Jalil who holds 4,000,000 or 20% shares in Astacanggih.

The Purchase Price shall be paid by Bakti Wira to the Vendors upon receipt by Bakti Wira of documents as specified in the Share Sale Agreement (“Completion Date”).

The completion of the Acquisition of Shares shall take place on the Completion Date.

Pursuant to the Land Sale Agreement, Bakti Wira Sdn Bhd and Astacanggih have agreed to acquire from Awan Megah the following vacant freehold lands with some abandoned oil palm trees:-

(collectively referred to as “Lands”) at the purchase consideration of RM130,000,000 (“Land Purchase Price”) to be paid in cash. The Land Purchase Price was arrived at on a willing-seller & willing-buyer basis taking into account the price of lands situated in the surrounding area. The Lands are acquired free from all charges, liens and encumbrances with vacant possession but subject to whatsoever restrictions in interest and conditions of title whether express or implied in the separate titles to the Lands for the purpose of developing them.

Awan Megah is a private limited company incorporated in Malaysia and having its registered address at 25-1, Jalan PJU 1/42A, Block F2, Dataran Prima, 47301 Petaling Jaya, Selangor.

(a) The Proposed Acquisition of Lands is subject to the following conditions precedent:-

(i) the execution of the supplemental agreement to the Privatisation Agreement between Awan Megah and the Government of Malaysia and Syarikat Tanah dan Harta Sdn Bhd (“Supplemental Agreement”);

(ii) the approval of relevant authorities for the transfer of the Lands to be obtained by Astacanggih (if applicable);

(iii) the termination or mutual rescission of the Joint-Venture Agreement and Supplemental Agreement, between Awan Megah and Guppyunip Sdn Bhd in respect of the Lands.

(b) Payment of Land Purchase Price

The Land Purchase Price shall be paid by Bakti Wira and Astacanggih in the following manner:-

(i) RM13,000,000 shall be paid by Astacanggih to Awan Megah upon execution of the Land Sale Agreement, such payment being the deposit and towards part payment of the Land Purchase Price;

(ii) within one month from all the conditions precedent in Section 2.1.2 above have been fulfilled, Astacanggih shall pay a sum of RM9,445,591.69 to Awan Megah’s solicitors and provide land bonds in the total sum of RM87,554,408.31 in favour of Government of Malaysia or as may be directed by the Government of Malaysia; and

(i) a sum of RM20,000,000 shall be paid to Awan Megah’s solicitors as stakeholders upon delivery by Awan Megah to Astacanggih of the duly executed Memorandum of Transfer together with original titles to the Lands.

Completion of the Proposed Acquisition of Lands shall take place upon registration of the Lands in favour of Astacanggih or its nominees, and payment by Astacanggih of the sum of RM20,000,000 above.

3. LIABILITIES TO BE ASSUMED

4. RATIONALE & BENEFITS OF THE ACQUISTIONS

The Acquisitions present an opportunity for the Boustead Group to expand its existing land bank in Bukit Raja, Klang, Selangor via Astacanggih who together with Bakti Wira will be acquiring from Awan Megah approximately 200 acres of land pursuant to the Acquisition of Lands.

Moreover, the Lands are adjacent to 700 acres of development land held under Jendela Hikmat Sdn Bhd, a company in which the Boustead Group and Lembaga Tabung Angkatan Tentera (“LTAT”) jointly hold 60% equity interest.

The combined land bank of 900 acres will create economies of scale for the development in terms of shared infrastructure and other services.

Surrounding developments in this location include the Setia Alam and Setia EcoPark housing projects by the SP Setia Berhad Group and Bukit Bandaraya Shah Alam housing project by the Lebar Daun Berhad Group, both of which continue to draw interest from investors.

The Malaysian economy expanded at a faster pace of 5.1% during the first half of 2012 (January – June 2011: 4.7%) despite the increasingly challenging global economic conditions. Growth in the domestic economy was supported by strong private consumption and robust private investment. The global economy is expected to further moderate during the second half of 2012 as the euro area debt crisis shows no clear signs of abating. Additionally, tepid economic growth in advanced economies and the slowdown of emerging economies especially in China and India, point to weakening global economic prospects. The deterioration in the external environment and correction in commodity prices are expected to weigh on Malaysia’s export performance during the second half of 2012. Nevertheless, the vibrant domestic demand is expected to be sustained during the second half of 2012, supported by both public and private sectors amid conducive financial market conditions, stable prices and a favourable labour.

Inflation is expected to moderate to 2% – 2.5% in 2012. Despite the domestic economy growing at a faster pace during the first half of 2012, inflationary pressures are expected to be mitigated by continuous productivity improvement and capacity expansion.

The Malaysian economy is expected to strengthen further and projected to grow at a faster rate of 4.5% – 5.5% in 2013. Growth will be supported by improving exports and strong domestic demand on the assumption that global growth will pick up, especially during the second half of 2013. The growth projection is premised upon the expectation of an improvement in the resolution of the debt crisis in the euro area and stronger growth momentum in the economies of Malaysia’s major trading partners. Domestic demand is expected to maintain its strong momentum driven by robust private investment and strong private consumption. Private sector activity will be supported by an accommodative monetary policy in an environment of low inflation coupled with a robust financial sector. Thus, nominal Gross National Income per capita is expected to increase 6.4% to RM32,947 (2012: 4.4%; RM30,956). In terms of purchasing power parity, per capita income is expected to grow 4.4% to reach USD16,368 (2012: 3.2%; USD15,676).

Given that domestic economic activity is expected to strengthen further in 2013, inflation is estimated to increase moderately, partly mitigated by further capacity expansion in the economy. Hence, for 2013, the average inflation rate is estimated to be between 2% and 3%.

5.2 Overview of Property Market in Malaysia

5.3 Prospects of the Lands

BHB is optimistic on the prospects of the Lands considering their strategic location in the Bukit Raja, Klang vicinity with good accessibility to major highways and close proximity to established housing projects.

Demand for industrial land in this location has been on the uptrend with the completion of UMW’s latest Storage and Testing Plant in Bukit Raja, Klang.

6. RISKS IN RELATION TO THE ACQUISITIONS

6.1 Compulsory acquisition by the Government

The Malaysian Government has the power to compulsorily acquire any land in Malaysia pursuant to the provisions of the applicable legislation including the Land Acquisition Act 1960. In such event, the amount of compensation to be awarded is based on the fair market value of the property and is assessed on the basis prescribed in the Land Acquisition Act 1960 and other relevant laws. If the Lands are acquired compulsorily by the Malaysian Government, the compulsory acquisition could potentially affect the future expansion to develop the Lands.

6.2 Completion of the Proposed Acquisition of Lands

The completion of the Land Sale Agreement in relation to the Proposed Acquisition of Lands is subject to inter-alia, the fulfilment of various conditions precedent as highlighted in Section 2.1.2 above.

6.3 No assurance on the realisation of the anticipated benefits

There can be no assurance that the anticipated benefits of the Proposed Acquisition of Lands will be realised or that the Group will be able to generate sufficient future revenue to offset the associated acquisition costs of the Lands. As such, the Group will seek to mitigate such risk by adopting prudent risk management and monitoring of our Group’s investment strategy.
7. EFFECTS OF THE ACQUISTION

The Acquisitions will not have any effect on the issued and paid-up share capital of BHB and the substantial shareholders’ shareholdings.

The Acquisitions will not have a material effect on the net assets and gearing of BHB.

The Acquisitions will not have a material effect on the earnings of the Company for the financial year ending 31 December 2012.

Other than the conditions precedent in the Land Sale Agreement, the Acquisitions are not subject to the approval of the Company’s shareholders’ or other government authorities.

None of the directors or substantial shareholders of BHB and persons connected to them, have any interest, direct or indirect, in the Acquisitions.

11.2 The Proposed Acquisition of Lands is expected to be completed by 6 months from the date of the Land Sale Agreement.

The highest percentage ratio applicable to the Acquisition pursuant to Chapter 10.02(g) of the Main Market Listing Requirements of Bursa Malaysia Securities Berhad is approximately 3.59% based on the latest audited financial report of the Company as at 31 December 2011.

The Share Sale Agreement and Land Sale Agreement will be made available at the Company’s registered office at 28th Floor, Menara Boustead, 69, Jalan Raja Chulan, 50200 Kuala Lumpur from Monday to Friday (except public holiday) during business hours for 3 months from the date of this announcement.

This announcement is dated 27 December 2012.

From where deepak (allegedly) get 13mil to buy those diamonds? Why pay extra 13mil when he is financially troubled? Deepak must be worth 100 mil to be able to (allegedly) splash out 13mil.

Thank you to Rafizi for exposing the LTAT fund missappropriate management to buy Deepak company by Boustead which will loose the amount dividen to the LTAT and the Armed Forces personnels and pensioners. This is about LTAT funds and what about other funds Like ASN, ASB and other funds manage by PNB?ASNB which is trustee funds. I hope Rafizi will also look into this and put it to light for the public to know particularly to the share holders. This funds amount to billions of ringgit. The public would like to know the accountability of the funds. Thank you to… Read more »

Where did Boustead get the RM20million? The funding is from Penang tax payers. Read my article on Boustead Compensation Scandal at http://eusoon.blogspot.com/2012/07/boustead-compensation-scandal.html

A Very professional misadventure it is !

Cover up and siphon
Siphon and cover up.
That is how (certain leaders) … could be … richer….