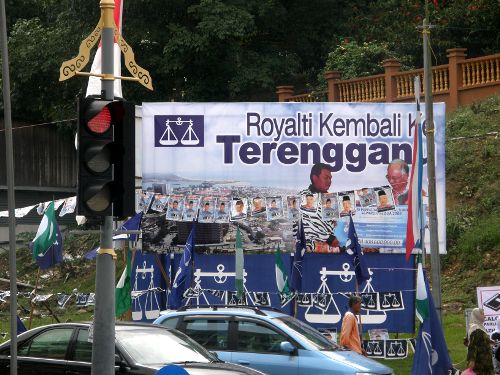 The oil royalties may have been returned, but the state’s debt has been rising and it posted a deficit for 2007

One night, when I was unable to fall asleep, I opened up the Auditor-General’s Report for 2007, thinking it might be a cure for insomnia, but what I saw caught me completely by surprise.

I found out that the state once again started receiving its oil royalties from the federal government (coming from the Dana Khas or Special Fund). No surprise there:

But, and this is where it gets interesting, the state government’s debt to the federal government has been rising during the same period:

These are largely due to federal loans, taken out for “water supply” and “low-cost housing” projects.

That’s because the expenditure in running the state has soared from RM128 million in 2003, the last year of Pas rule, to RM1.5 billion in 2007!  This is due to a sharp increase in the payments to various state agencies. Truly amazing.

The same thing has been happening in Kedah, the most indebted state in the country.

How on earth the Ketuanan Melayu gang managed this? I don’t know!

The state government expenditure should be scrutinised ! Such a big jump in expenditure is sure to raise eyebrows.

So now it is petroleum royalty. Whatever happened to Wang Ehsan? Anyone want to ask Bapak Wang Ehsan this question?

vote wisely KT voters. you all are very blessed to have the 2nd chance and all the huge goodies.

loose74 is right…Kelantan and Terengannu are traditionally leanning to PAS as opposition. It is not unreasonable to believe that it is the BN/UMNO strategy to put the states to near bankrupt position so to easily asserting control and bating the voters with more money.

However, the corrupt had not been expecting their strong hold in states like Selangor, Perak, and Penang crashed down without a sign (or that they were blinded with 50 years in power and being arrogant).

My call to all KT voters:

Imagine if only Terengannu state government kenna taken over by PR. I guess BN’s game plan is to bankrupt the state coffer so that it would remains in the hand of BN

Precisely, why I say? Federal government must be taken over as soon as possible. Otherwise, some old vicious cycle would continue