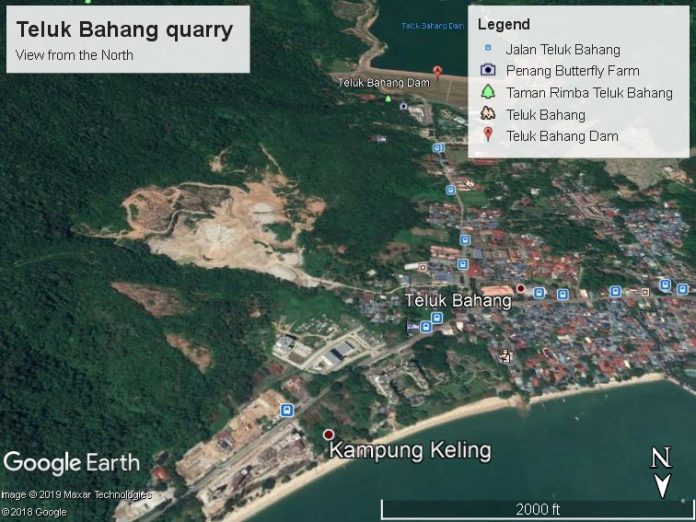 The Penang state government must reveal who are the real current owners of the illegal quarry in Teluk Bahang, which has devastated the hills there.

Long before the expose in the Star yesterday, Penang Hills Watch had highlighted the clearing to the state government in March 2017 – more than two years ago. The state government responded that this was former quarry land and it was mulling legal action against the clearing and the owner would be required to restore the hill. A year earlier, in 2016, a stop work order had been issued.

So how were operations continuing in 2019?

Check out this statement by Sahabat Alam Malaysia.

Such is the wanton disregard for the environment in our country.

Are they building new housing area over there? Sea and bridge view could fetch good price for DAP and the developer. Time to bring Gerakan back… Penang is in a hot mess right now…

You shut up lar….stupid DAP spokesperson…Go ask your boss why Penang assessment rate increase…everything also increase? If I see a DAP flag in my area, will remove immediately…

hehe…looks like you are too lazy to read the news..more reading will help to lift your intelligence…but then nobody can help you if you are lazy….LOL

Very stupid indeed!
Nevermind that PGDAP cut his spending power for the sake of Greater DAP for Cosmopolitan Penang for the Rich & Famous!
I have never met such an idolising idiot in my entire life!
Oh, I nearly forget there’s another one idiot shrieking!
A 2-in-1-Troll-Combo from PGDAP?

Who is the real idiot. When we reply, no one can disproof us. You are the real hypocrite. Talk and complain so much and yet you eare secretly buying from the developer and live in a condo. Talk about flooding and environment you go and buy a wagyuh car a 4wd use in urban area. Go and look at your good self before shrieking.

That’s your problem when you shriek 🙂 🙂 🙂
Together with the self-contradictory he-he-he, the 2-in-1 Combo rings helluva stupid!!!
Pls don’t waste comment space by trying 2 times harder, which are noises!

Tulang can be a spinner polutician. Never reply to factd . only a very very deep silence as good as the chip executive like CLam. No wonder a deep sense of inaction

Vegetables top the list of price increase with an average hike of 18%.

Chillies ranked the highest with a rise of between 46% and 88%, according to the Statistics Department of Malaysia which tracked the prices of 100 items in the category of food and essentials for households between June 2018 and July 2019.

YB Sim Sim Tze Tzin, the Deputy Minister of Agriculture and Agro-based Industry, has failed the rakyat, just like he has failed Bayan Baru residents in the library issue?

hehe…when there is a demand there bound to be a supply…the state government needs to be business friendly for sake of economic development so that fancy condominium equipped with spa and swimming pool can be built for people abandoning heritage residence and bin chui 4WD with monstrous wheel can be imported for the pleasure of selected few….