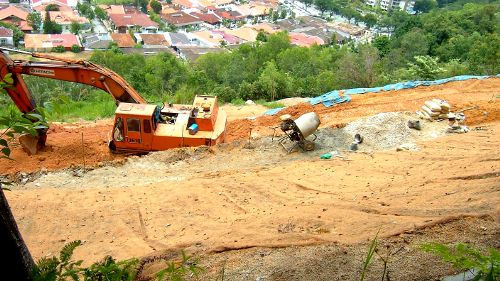 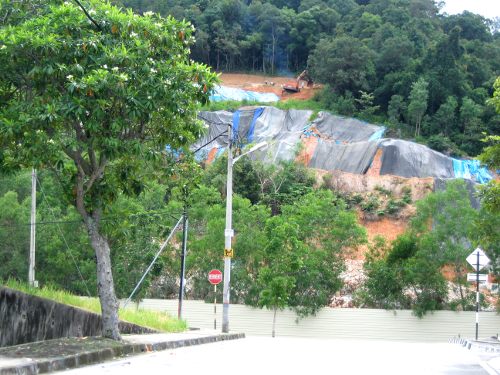 Residents of Tanjung Bunga are claiming that the developer of a controversial project is defying a stop work order to cease land development work on three plots which they say are not supported by a geotechnical report.

They have taken photos to show that work is continuing on these plots. From these photos, it appears obvious that work is being carried out on Class IV slopes.

Meanwhile, one Penangite who is opposed to hillslope development says the Tanjung Bunga Residents Association should demand answers from former Penang Chief Minister Koh Tsu Koon and ask him how such projects were approved in the first place.

Remember Kg.Buah Pala ‘daylight robbery’ and the actions or rather the inactions of your Penang CM. I did say that the Penangites should have picked one from their own not an ‘outsider’. KTK is definitely a piece of the historical rubbish, as somebody noted.

It’s disgusting to think the politicians who are elected by the people of penang and the council are such a bunch of spineless useless humans unable to impose a simple order, just allowing our beautiful island to become a concrete jungle.Tourists feel sad that this charming island with its friendly people is turning into a hotbed with monstrous looking high buildings, devoid of greenery.

well…frm where i stay i can see clearly the Surin project…as of now, they are still knocking, digging, blasting all the way…..therefore i dont think they give a rat’s a… on any stop work order…the only way to shut them down is to do it by force…

“Meanwhile, one Penangite who is opposed to hillslope development says the Tanjung Bunga Residents Association should demand answers from former Penang Chief Minister Koh Tsu Koon and ask him how such projects were approved in the first place.”

If the top photo looks scary, who wants to buy a apartment live on top in such a place? If the people at the bottom of the hill feels threaten from the slip, what about those living in the block. Their apartments will go down with it. Both lives are also involved. Developers will not develop the place if there is no demand or buyers just as there are many abdandoned housing. But why there stil buyers if TBRA feels the place is not safe? Now the contractor has cut so much of the hill and you look as if… Read more »

Dear Anil, As a resident of Tj Bungah, I too am concerned about the safety of my family. There is no point in asking the Gerakan-led government to answer for their deeds. On the other hand, can somebody tell us whether the work that is being done despite the ban is because the hill needs to be stablized? I have another friend living in Bukit Ceylon in KL who faces the same problem. Once the trees have been cleared, the hill is basically unsafe. A responsible developer will have to do something to make sure the hill is safe. Engineers… Read more »

If the developer would not cease work, consult your lawyers and get a court order if the stop work order is in order.

The core issue is not to “demand answers from former Penang Chief Minister Koh Tsu Koon and ask him how such projects were approved in the first place.” We all know that the project was approved by KTK and the last BN government in Penang via dubious means. Besides, who is KTK these days but a recycled artefact best consigned to the rubbish dump of history! So, raising up this point ad infinitum ad nauseum is purely a red herring – meaning it is being raised again and again by those whose main objective is not to solve this problem… Read more »

There he goes just walking down the street, singing “Got the money & just don’t give a rat ass…!!!