(I use the term ‘public’ because a speakers’ corner at the Perdanasiswa Complex in Universiti Malaya has just been re-opened after about 40 years.)

The Penang state government said yesterday that it was thinking of a permanent stage at the Esplanade for candlelight vigils, open forums and demonstrations. It would be at a distance from traffic, said a report in today’s Sun.

“The stage can be used on request by anybody, provided it has not been reserved for other events,” said exco member Chow Kon Yeow, who added that a committee may be set up to liaise with NGOs in this matter.

Now this is a positive development, especially if the state government folks are going to discuss the exact location with civil society and the public – but why do we need a stage?  In London, the Speakers’ Corner does not require any prior request or approval for speakers to address whoever is willing to listen. On weekends, anyone can step up on a crate (no stage is needed) and speak to whoever cares to listen. At any one time, there could be around half a dozen different speakers animatedly addressing small crowds at different spots in the area while engaging with or ignoring hecklers. We should not follow the farcical Singapore ‘Speakers’ Corner’.

All the same, the loss of the fine public space in front of Dewan Sri Pinang still saddens me.

The state government yesterday clarified that the ‘candle-light square’ was fenced off as the area had just been landscaped with “ornamental vegetation”. In reality, much of this area has already been paved and tiled; the  landscaping is mainly around the fringes. 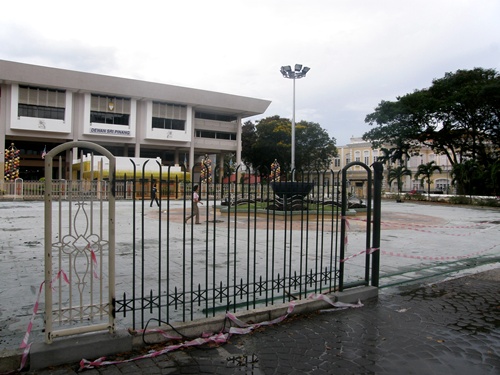 Landscaping should result in public spaces being enhanced rather than fenced up to keep the public out. Which raises the question, was the state government even aware of this fencing project? Or was this something decided and implemented by the state secretariat? It wasn’t the Penang Municipal Council’s decision, a councillor told me. Please dismantle this fencing. It is an eye-sore that is not in keeping with George Town’s world heritage city status.

The Penang Island draft Local Plan, which was prepared by a consultant in KL, is now being revised by the state government to put in higher density in certain areas, in the name of providing a bigger catchment area for public transport corridors. Now higher density is fine if you have an effective and integrated public transport system already – or about to be put – in place; otherwise we will be saddled with both higher density (which will no doubt please the developers) and congested streets.

The Penang Munipal Council had approved the draft Local Plan without those higher denisity changes; its position was that higher density should only be allowed when we have genuine public transport corridors, the same councillor told me.

Penangites must scrutinise this Local Plan carefully when it is eventually put on display.

Something to watch out for:

A controversial plan to build a 37-storey building on a steep hill-slope near Shamrock Beach in Batu Ferringhi is now being looked at by the Penang Municipal Council. The Council may organise a session to hear objections if it receives negative feedback from five neighbouring landowners.

I think this should be submitted for the Joke of The Year contest. LGE and his clueless exco are reknown for such empty and idiotic ideas that big in promise but tiny in practicality. Firstly, DAP professes freedom of speech and the right of public assembly. And they had been demanding for these rights and refused BN govt’s offer of closed demos. But here in Penang they want to restrict people from speaking and assembling freely to some far corner. Secondly, who will dare to use the corner (even if this actually get implemented) when DAP are quick to lodge… Read more »

Another wonderful gimmick from the state. Let’s face it, LGE is trying so much nonsense when he can work on more substantial matters not that he is incapable of doing it. Penangites/Malaysians are not ready for such rights. Look at the blogs and forums and FB. Cybertrooper la, FB gangs la, usage of foul language by political party supporters on the net … imagine the same thing at the Speaker’s Corner! Fights will break out. Then Penang Opposition (BN guys) will use it against LGE and LGE supporters cannot tahan for sure. Then you will have Ng Wei Aik lodging… Read more »

Isn’t the real meaning of Demo cracy and freedom. People can do want they want to SPEAK UP and bang their chest as long as no violence is incited. Zul is not talking nonsence – you can’t see his real stand – only religion and race forgetting many East Malaysians are bumis and what i sthe point of forming Malaysia to be forced to list to one race and one religion

Penangites deserve much more than gimmicks.

We need a government which is transparent. Which serves the people. Which is willing to listen to what the people tells them. Which is not going to lord over us. Which doesn’t lie to us.

A “speech corner” is a gimmick that won’t get us anything.

You are spot on KEE. Do also complain, dont do also complain. Where were they last time ( previous government ) Don’t even dare to … spoilt brat. This present state government has done so much in spite of the economic slowdown and various contraints intentionally imposed by federal government. Give them a chance. It is anytime better than the last 52 years. Don’t you think so.

In a nutshell, neither MPPP nor the state government is in a position to grant free speech with a speaker’s corner unless that corner is in a private premise.

Internal security is not under the jurisdiction of the state government.

Anyway, YB Chow did not toss the idea of a speaker’s corner. Looks like it’s more your idea, Anil. 🙂

Actually, it was in a report in the Sun today…

I agreed the maturity level of Malaysian majority including myself is at doubt… But if i were to comment, i think there are two places that are more suitable for a public’s Speakers Corner, which are opposite the State Legislative Council and at ground floor of KOMTAR… One thing, we don’t have to built new things nor does we have to sacrifice our green space… Opposite the State Legislative Building is a pocket space between the foodcourt and the carpark… On the ground floor at the five road junction beneath Komtar (facing GAMA) is avery nice pocket space that were… Read more »

Step by Step! my fellow blog readers. 1st the location. Next work with the police Head, try and get some guidelines or come to an understanding to prevent police intervention. If this is successful it will also look good for the police and related groups. So, STOP complaining Dilbert Singh. Any donkey can tell you how it will fail, but it takes a smart person to make it work. So all of you who are complaining – do you want to be a donkey or a smart person??

So some wise guy wants to build A STAGE (spelled more concrete and more money spent to sell out our “green” spaces)?

What is the point of a stage????? Is that going to stop the police from charging in and put you in lokap for speaking up?

Sounds like a guise for another procedural hurdle and clever contractor money will make!

Do something for you all, complain… Dont do, complain, this is Malaysian’s mentality la…

speakers corner should be in KOMTAR.. safe and away from POLICE!!.. SIMPLE, dap wanna play politics again when police come, and then tell public, see, we have done something, but police kacau, who kena, BN.. lame politicians.. LGE should make a trip to speakers corner in london first..

What is the point of providing a speaker corner in an open space if the police come and put a stop to this regularly because of the stupid rule that any public congregation more than 3 participants needs a police permit ?

Such a speaker corner may, effectively, only be used by BN and their NGOs.

It doesn’t work in Malaysia as the people are not matured enough. People may be paid to create chaos there when the topic of the forum/ demonstration is against certain party

Higher Density doesn’t work especially if there is no proper transit and access, we all know that this is already lacking. In any case higher density in the long term is a liability. The only benefactors of higher density are the developers and I can smell the developers interference in this. I like to see the mater transportation plan together with the Local plan to make sense of this. Dont know lah…in other places they try to solve high density neighbourhood transport problems and here we seem to invent these problems. Look at Times Square, Gurney Drive and many other… Read more »