These are the results for the last five years of Lingkaran Trans Kota Holdings Berhad (Litrak), the concessionaire for the Damansara Puchong Expressway (LDP), a major 40km highway in the Klang Valley.

Traffic volume along the LDP has increased by 3.3 per cent since last year, contributing to a higher profit in 2013. Earlier, in 2007, the government had agreed to compensate Litrak with RM150m after coming out with a revised toll structure for the period 2007-2010. 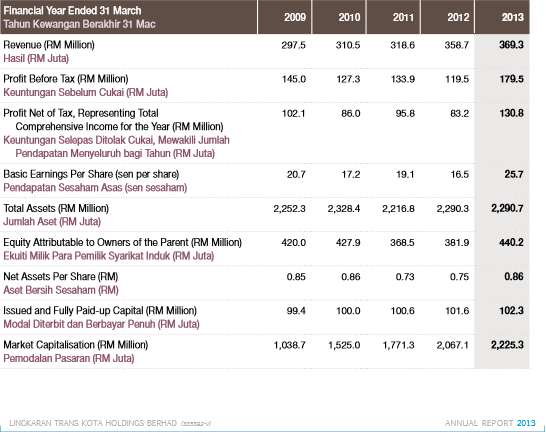 This is an extract from the Chairman’s Statement in the Annual Report for the firm:

As Damansara-Puchong Highway (LDP) is now considered a mature highway, traffic growth mentioned above is a fair reflection of the traffic pattern for a matured urban highway. The double digit revenue growth that we achieved in the previous year was the result of the scheduled toll increase due on 1 January 2011 for LDP of which the Government of Malaysia has decided to defer until further notice. In the meantime, the Group has therefore made the necessary accruals based on the terms of the Concession Agreement signed together with the Government of Malaysia.

The Group profit net of tax, representing total comprehensive income for the year of RM130.8 million is the highest that has ever been achieved by the Group and the significant increase of RM47.6 million compared to the previous year is mainly attributable to the following:

1. The increase in Group revenue of RM10.6 million which was due to higher traffic volume on the LDP.

2. A substantial decrease in the charge for Group depreciation and amortisation of RM50.8 million from RM104.9 million expensed out in the previous financial year ended 31 March 2012 to RM54.1 million charged out for the current financial year ended 31 March 2013. The lower charge is solely due to an adjustment that was made in the previous year to take into account the latest toll revenue projections study for LDP that was concluded in the first quarter of calendar year 2012 by an independent consulting firm.

3. An increase in Group income tax expense by RM12.5 million as a result of higher Group profit before tax.

The major enhancement project known internally as LDP5 which commenced in November 2009 was fully completed on schedule during the financial year just ended. It has now been just over half a year since the final package was completed and we are pleased to see that traffic flow at the upgraded areas has improved.

Of course, the firm has had to carry out upgrading work to cater for the higher traffic flow and dispersal.

The main shareholder of the company is the well-connected Gamuda Bhd (44.9 per cent).

According to an extract from a report in Sin Chew:

The government has yet to make an announcement on the margins of increase in 15 highway toll rates, but according to Sin Chew Daily, tolls on Damansara-Puchong Highway (LDP) and the Western KL Traffic Dispersal System (Sprint Highway) can be increased by 50 sen and RM1 respectively from January 2014 as per the contract.

A Litrak Highway spokesperson told Sin Chew Daily, according to the contract signed with the government, its two highways, namely LDP and Sprint can be increased to RM2.10 and RM2.50 respectively next year.

He said the company has yet to receive any official notice from the government on toll rate adjustment and the actual margin of increase is therefore yet to be decided.

This is for 29 years but the last time the toll structure was revised, the concession period was extended by one year to 2030.

Also, “under the Concession Agreement, the Government will make available the land required for the Highway, subject to reimbursement by LITRAK to acquire land of up to RM98 million”.

According to the Litrak Annual Report 2013:

Pursuant to the provisions of the Second Supplemental Concession Agreement executed between LITRAK and the Government on 4 September 2007 and via the Government Gazette No. P.U.(A) 443 dated 26 December 2006, the Government had revised the toll rates structure for LITRAK effective from 1 January 2007 to 31 December 2010 as follows:

In consideration of LITRAK agreeing to the above revised toll rate structure, the Government has agreed to provide
LITRAK, with a sum of RM150 million cash compensation (paid in two equal tranches within the calendar years of 2007 and 2008) and a one-year extension to the Concession Period (from 14 August 2029 extended to 14 August 2030).

So what do you think? Is the concession agreement fair or lopsided?

Thanks to public pressure, Najib has to delay toll hike.

Its true the highway contracts were badly negotiated and lopsided but the history of these numbers is actually much more complicated than people realize. In reality the first few highways ran into cost overrun and the terms renegotiated. THEN when the highways started, the projections for traffic fell WAY BELOW..BUT eventually the traffic shot up BEYOND their wildest dream. New highways learned how to do traffic projections better but with old terms that were meant for lower traffic and they learned how to cherry picked the good ones while off-loading the bad ones to the govt. The real bailout and… Read more »

Building highway cost money. Nothing is free in this world.
Would PR DAP LGE not collect toll for the tunnel. Already we are on the losing end. 110 acres contra for RM1,200 per sq ft.

No losing end if contractors cam ‘give back’ come election time, this is politics afterall, do not be naive…

Far cheaper for PWD to do the job.

Agreement must be adhered. PR DAP people has always insisted that the law be respected?. Isn`t it. What is the fuss now. Trying to propagandize and get political mileage

Fred, you want to put your argument or view no personal or family or I could retort back even worse.

KK, I am trying to illustrate lies and deception. Agreement must be followed and adhered. LGE tick off Najib for lying about the tolls. What about LGE (and) … Boustead, Botak head, the tunnel, development above 250 ft and many others.

Anil is now talking about highway toll and you u-turned to property again?
Cannot understand why you mentioned you cannot afford a house in Penang when you also once said you sold a house for RM1.2million? What happened to the money? Financial mismanagement?

This is a cover for warlords from Umno to pay their proxies and cronies. How else can they keep enriching themselves and all their cronies and proxies ? Also who came up with such a scheme and approve them ?

When agreement has been signed you have to follow. That is what agreement and laws are for. The worse part is LGE DAP (administration) (allegedly) do not follow the rules of law and agreement. They can allowed 72k LMC to be upgraded an sold up to 200k with every floor up at an extra RM500. Even worse houses or apartment brought 20-40 years ago are now subjected under state control as MC when all along it has not been under any category. All in the name of … deception that he is doing for the good of the people when… Read more »

Yang
We readers are very concerned with your state of mind due to your frustrations with housing matter.
You use anilnetto.com to release your anger and hopefully this relieve you from throwing tantrums at your family members.
Stay cool Christmas is on the way.

All low-cost (up to RM42,000) and low-medium cost (up to RM72,500) houses cannot be resold for up to 10 years from the date of the sale and purchase agreement (SPA). This 10-year rule covers all past and future purchases.

Houses that were initially purchased at a cost below RM400,000 on the island as well as below RM250,000 on the mainland cannot be resold for five years if the SPA is signed on or after Feb 1 next year.

UMNO Youth appears to be against the hikes and let’s see if they are a force to go against their older brothers who are silent with such lopsided sure ho-chiak profits !

When lopsided agreement is signed, the users had to bear the blunt for the increase in toll once every 3 years. That is the problem of all privatised projects i.e. TNB, Syabas, etc.. by BN. No concessionaires will concede with lower increases in toll rate without fair compensation from the Government. They will milk you dry for years to come.

The lopsided agreement is deliberately signed to favour the cronies from highways to IPPs?

Privatisation or piratisation?
Unfortunately the 47% are still no aware of the differences.