Dead fish floating in a river Photos by Brimas 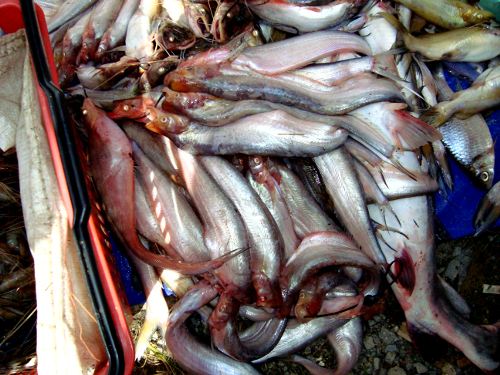 Fish being sold in a market in Miri

Once again, another wave of mysterious fish deaths in Sarawak – around Bakun, Mukah, Kapit, Marudi and in the Baram River near Miri. The worst hit is reportedly the Balui River around the jinxed Bakun Dam.

In Baram, the affected fish species include ikan baung, ikan burih, ikan tapah and ikan padi as well as various types of prawn. Sarawak NGO Brimas observed that “most of the fish seemed weak, tired and have difficulty breathing. As a result, the fish surfaced for air but after some time suffocated to death. Also, the fish appeared blind.”

Brimas found that the gills of the fishes were not clogged with mud or blocked by silt.  No mud was found within the stomach or intestines of the dead fish, but the insides seemed watery.  The river was described as “brownish, muddy and polluted with silt due to logging, oil palm plantations and industrial development activities.”

Brimas’ observation of “difficulty in breathing” ties in with the Ministry of Environment and Public Health’s findings, which reportedly pinned the blame on ‘suffocation’ caused by siltation, due to logging, plantations and land-clearing projects. The Ministry found a high-degree of suspended solids in certain rivers – from six to 20 times the normal level.

The Ministry put the blame on giant logging and land-clearing companies. And to think the government is giving out loan – public money – to timber companies that are clearing forests and setting up oil palm and tree plantations….

Under the state EIA law, any development project measuring 500 hectares and above must be subjected to EIA.

“By doing this, they escape the need to carry out EIA. This happened in the upstream of Bakun. That is why these projects had caused excessive siltation and killed a lot of fish. These fish were washed down by the rivers during the floods,” he explained.

Dr Rauf said his ministry will hold a meeting with members of the Sarawak Timber Association early next month to find a way for them to cooperate to stop the environmental degradation.

By the way, what are logging firms doing upstream of Bakun?

Brimas for its part has expressed concern over the safety of villages and members of longhouses community along the Baram River. “These people are exposed to danger and environmental disaster as they entirely depend on Baram River for their daily livelihood,” it said in a statement.  The group said it had seen people scooping floating fish and collecting the dying fish in Kuala Baram, which could later have been sold in local markets.

The problem with the EIA people is that they are somewhat reluctant to venture into the interior especially in the regions along the Baram and Rajang river basins. These are the places where the contamination or river pollution is always hidden from public eyes. My sincere advice is; why not use your expertise and the job that you are supposed to do to help preserve our environs.

I am from the Netherlands, and I think it is such a shame that the rainforest across whole Borneo, including Sarawak, has been ravaged so much, in such a short time, because of greed. Am I wrong, or do Malaysians don’t care s*** about their nature, do they only care about their Ipod, new car etc.?
Is it all Taib Mahmud’s fault? And couldn’t the Malaysians throw this sucker out of the government?

Well, but I think it is already to late to save the rainforest. Too much already have been destroyed….

Our rainforest is at least 220 million years old, such a wonderful gift from mother nature and medicinal plants are abundant for further research and study.. why destroy forest, the animals and the fishes that had sustain human life for eons.

The greed of this one man who thought he is God is ruining and destroying Sarawak for some paper notes/money…
you can’t take anything with you when you drop dead, why want so much printed papers… please stop destroying mother nature and our rainforest..

Fish dying in Sarawak’s rivers is an Act of God. God is responsible for these deaths since only God has power of life and death over living things. If God wants the fish to live, they will live. If not, they will die. The giant logging companies are not responsible since they are all close to the Chief Minister of Sarawak who protects them no matter what happens. And since Taib Mahmud has been in power for so long, God must be happy with him for doing a good job. Also, the logging companies are logging upstream of Bakun because… Read more »

How far are we gonna go b4 someone realises that our water air and earth is poluted?Does anyone really care?Money is nothing if u cant live for **** sake!Wake up!!!!
Wat are the environmentalist groups doin? The Environment (Abuse) agency sleeping? damned ministries caught napping in their duties again…