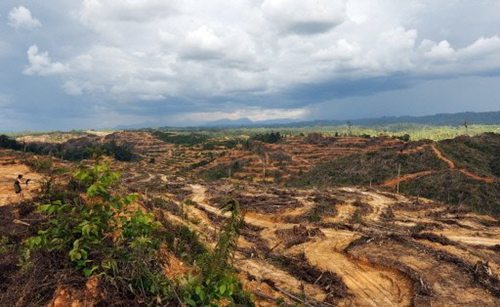 Logged and cleared for a plantation near Lapok, Sarawak – Photo courtesy of AFP.

Sarawak Rural Development Minister James Masing reportedly admitted some logging companies had behaved badly and “caused extensive damage” but said the Penan were “good storytellers” and their claims should be treated with caution.

The Penan themselves are now experiencing food shortages. Food shortages in Malaysia? Hungry children queuing for food handouts? Who would have thought we would see this day in Malaysia. A Catholic Church in Miri is now providing relief for the Penan in the remote Kapit Division.

The blockades by the marginalised Penan are their desperate last stand in their “final conflict” with the logging and plantation firms. The Sarawak government seeks to double its oil palm coverage – now that its natural (primary) rainforests have been rapidly depleted.

“Their farms had been destroyed by wild animals and they are now depending entirely on food that they foraged from the jungle, but the supply is insufficient,” he says.

If it is really true that wild animals are to be blamed, why hasn’t this been a recurrent problem? Why is the jungle supply only insufficient now?

Is it because the wild animals themselves have suddenly lost their own natural habitat (due to logging and forest clearings), forcing them to now forage at Penan farms?

So, who are the real storytellers in Sarawak?

If only the government made time to evaluate these logging companies before it allowed them for clearing. The people of Sarawak are now paying for this oversight.

In the first place, the government should have evaluated the logging companies before it gave them permission to clear the land. Now, leniency has taken a toll on … the people in Sarawak.

Can you eat oil palms for breakfast, lunch and dinner?

I am interested to help out as well. went to help with the flooding and the same line was given. Ah, the flood was due to excessive rain. The draugh was caused by El Nino. The fish died because they ran away with the big animals. Utter rubbish. It is the logging!!

You forgot to mention DCM George Chan’s claims that Penans can find food in jungle, so how can be starving? Arrghh.. tweeted that link but it’s buried under too many tweets – however the story is up on Borneo Post.

Let the SABM take up the case with the Authority Concerned.

The PM should lead the way to effect his 1Malaysia concept.

Let’s join the people power and put our suggestion forward in his 1Malaysia Webpage.

They deserve what they got. Afterall they have voted for the BN’s politics of development. You reap what you sow.

…. sucking the people blood and your own people up there on the tree.

This is a real misguided tactice by Mr. Joseph Entulu. The constituency of Belaga is under PRS, under the leadership of Mr. James Masing. Tell me when on earth the Natives ever die without food especially the Penans. Their rivers have been polluted for donkey years, the jungle had beeen logged and now the land has been cleared for Oil Palm and Planting of trees. Soon will be flooded by the Damned dams: Bakun and Murum dams. WHO IS RESPONSIBLE? it is (the major logging and plantation companies). Why dont Mr. Joseph Entulu ask these companies to give food to… Read more »

Who are the story tellers? The BN govt in Sarawak. Raping the land is not enough. They have expanded their wings to plunder people in west Malaysia. Look at Tiong. He plundered PKFZ.

Sarawak Boleh!!!! The West Malaysians always look down on Sarawakians and Sabahans as inferior to them…good on you, Tiong….but share a bit lah…

What a disgrace. Malaysia is an abundant country with resources far exceeding even Western countries like the UK and France. Some even say that we are richer than even the UK for we have virtually everything under the sun (resources) with no natural calamities that the government has to fork out money to rectify. Other countries, governments face huge bills for natural calamities such as typhoons, tornadoes etc. Canada is a good example. Also, the governments pay for healthcare, social security, looking after the old and unemployed etc. In Malaysia, despite having tin, gold, copper, oil, natural gas, rubber, palm… Read more »

WOW, must be some kind of wild animal. To me, if it is wild animals, it must be those monsters from Ultraman series.

I have done so. Please do your little part.

Donation information can be found here: